TIFF is pleased to announce that the two Japanese films, Japanese Girls Never Die and Snow Woman have been selected for the 29th TIFF’s Competition section.

This year, there were a total of 1,502 titles from 98 countries and regions were submitted to TIFF.
A total of 16 films will be shown in the competition section at the 29th TIFF that will be held October 25 (Tue) – November 3 (Thu).

Japanese Girls Never Die is a new novel by Mariko Yamauchi, known for “It’s Boring Here, Pick Me Up”. Director Daigo Matsui of Afro Tanaka and Wonderful World End has made it into a film. Yu Aoi stars, for the first time in eight years, as the main character who has gone missing. Mitsuki Takahata, of the NHK morning drama Toto Nechan and Shokubutsu Zukan plays a member of a young group called KILROY which is responsible for the appearance, all over town, of graffiti featuring the missing woman’s face. This film vividly portrays the lives of three generations of women. 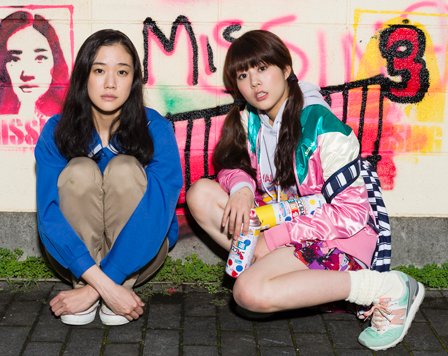 Comments from the director, Daigo Matsui:
It’s a great honor to be included in the Competition section. I was delighted because my film touched people’s hearts and their enthusiasm helped this nomination. To make this film, I was driven only by my faith, not by money or thoughts of private gain at all. When I heard the news of the nomination, I felt so relieved and started crying. When I attended TIFF’s Japanese Cinema Splash three years ago with How Selfish I Am! I experienced the ultimate bliss in connecting with film-related people from all over the world. I understand that I need to gain more ground in filmmaking, but I am still proud of myself for having this opportunity to compete with overseas filmmakers.

Profile of director Daigo Matsui:
Leader of the theater group Gojigen. He debuted as NHK’s youngest writer with Twin Spica. In 2012, he debuted as a director with Afro Tanaka. His other works include Sweet Poolside and How Selfish I Am!. World Wonderful End was officially screened at Berlinale and Our Huff and Puff Journey won two prizes at the Yubari IFFF. He won the best new director prize at the Tama Cinema Forum with those two films.

Comments from the main actress, Yu Aoi:
Thank you for selecting Japanese Girls Never Die for the Competition section of Tokyo International Film Festival. I am very happy that people who saw our film already liked it so much. Sometimes I get nervous about how a film I’ve worked on will be received, since I’m so involved in it. But when I heard the views from the selection committee, I realized I was right this time and now I’m looking forward to the festival premiere. Thank you from the bottom of my heart. We will enjoy TIFF with everyone from the Japanese Girls Never Die production team!

Comments from the director and main actress, Kiki Sugino:
It is an honor to be included in the Competition section as a director. Snow Woman is a fable that is very familiar to Japanese, a grim and strange story by Yakumo Koizumi. This is a very meaningful opportunity to have the world premiere of this new interpretation in Tokyo. I would like to express my gratitude once again to all those who supported this nomination. I spent years exploring the existence of ‘Yuki-Onna’, the Snow Woman, and I feel as if I were guided here by an invisible force. Please enjoy this fable about a human and a mysterious woman.

Profile of director Kiki Sugino:
Sugino boasts an already prolific career as actress and producer with films like Hospitalité, Au revoir l’été, Odayaka and Chigasaki Story to her credit. TIFF and Taipei Film Festival have held showcases of her work. Her directorial debut Kyoto Elegy premiered at TIFF in 2014. Her second directorial feature Taksu premiered at BIFF in 2014, and she got the Rising Director Award of marie claire Asia Star Awards.


Yoshi Yatabe, TIFF Competition Programming Director, comments:
For this year’s competition section, I have selected the works of two young directors who I feel are now embarking on the next stage in their careers. Both directors show us youthful ambition as they symbolically illustrate Japan in their respective styles. These two films respectively achieve both in their distinct ways, which is why I think they deserve to be presented to an international audience.

Daigo Matsui cleverly depicts the small-town claustrophobia of his generation through his protagonist, played by Yu Aoi, and gives us an honest, personal portrayal that could only be done now. The zaniness and originality with which Matsui uses girl power to push his characters out of their lethargy is where his talent truly shines.

Kiki Sugino’s new film, whose pastel tones harken back to the aesthetics of the Japanese classics left me utterly astonished. Sugino also works in front of the camera playing the protagonist, the snow woman, who emits such a luminous beauty yet charges the film with an ominous terror. The aestheticism in Sugino’s portrayal of this classical piece of folklore makes her work the most original of Japanese films this year. A film must be both universal and specific to culture in order to gain international attention.
29th Tokyo International Film Festival
Dates: October 25 – November 3, 2016
Venues: Roppongi Hills, EX Theater Roppongi and other venues in Tokyo.
previous
Lineup for Director in Focus: Shunji I...
2016.09.13 [Updates]
next
29th TIFF trailer is now available!
2016.09.16 [Updates]
Return to List of News
Daily News
Oct.25 - Nov.3, 2016