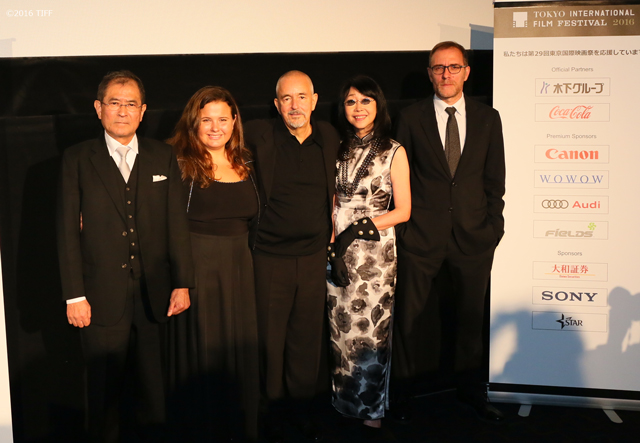 After appearances on the red carpet and at the opening ceremony, the five members of the 29th TIFF International Competition jury sat down with the press for an insightful chat.

Presided over by the ebullient French director-writer-producer Jean-Jacques Beineix (Diva, Betty Blue), the group had clearly found their groove, despite having met just the night before. Discussion ranged from such iconic Japanese attributes as sushi and Mt. Fuji, to the politics of filmmaking, and the necessity of freedom for creators to create.

The jury president is no stranger to Japan. In opening remarks, Beineix said, “I came in 1980 for the first time with Diva. And since then, it’s been a great love story. Otaku desu [I’m a fanatic]. I’ve been more than 20 times. I’ve been to Mt. Fuji three times, but only went to the top once. I must hurry up, at this age, to make it one more time.”

The jurors were asked what type of criteria would guide their selection for the awards. There are 16 films in competition for the Tokyo Grand Prix, Jury Prize and acting awards, including two titles from Japan. Responded Beineix, “I would like to celebrate daring, inventive pictures; pictures that are changing the rules of cinema. There is little chance, but these are the qualities we’re looking for: the aesthetics, the rhythm, the quality of acting, and the content.”

Asked whether they hoped to send a message to the audience, actor Valerio Mastandrea, who has appeared in films by Italy’s most noted auteurs, including Ettore Scola, Guido Chiesa, Nanni Moretti, commented, “Thank you for a great question. I speak for me, but I don’t feel like a jury member when I watch a movie. I think we are going to stay here in the cinema, watching like the public, feeling like the public audience. I grew up with the message that cinema must be emotion, and I think the feeling we get must be immediate.”

Said Nicole Rocklin, producer of Oscar winner Spotlight: “It’s important to watch film on a big screen, not on your phone. I think supporting filmmaking the way that I like to experience it [is a good message for the audience.] You can’t watch The Revenant on your phone.”

Mabel Cheung, award-winning director from Hong Kong (The Soong Sisters, A Tale of Three Cities), noted: “I see in this year’s Competition films there are some from veterans and some from young directors, including a first-time female director. Age or sex doesn’t matter, though. I’m looking for a film that I won’t forget, the kind that sticks in your mind, with characters so three-dimensional that you feel like you know them. I’m looking for films that break cinematic convention.”

Said veteran director Hideyuki Hirayama (Oba: The Last Samurai, Everest: The Summit of the Gods): “Film is a social responsibility in the sense that we’re bringing out a message, but at the same time, as filmmakers, we must feel that cinema allows us the freedom of communication. I am still in the midst of struggling to understand just what responsibility I have as a filmmaker, and also what freedom I have.”

Beineix concurred, “Cinema needs freedom. To make films, you have to be free, free to speak and free to get money. In a lot of countries, you can’t make films at all, or you must make films under cover. Censorship is everywhere. Cinema is not just an art, it’s an industry. The patterns of the industry may not match the patterns of the artist. I’m a militant for freedom, for the kind of cinema that talks and communicates and makes us less ashamed to be who we are. For some directors, film takes a lot courage, because you can get killed or put in jail.”

Beineix promised that his jury would watch the 16 films with “no premeditation, no expectation, eyes wide open,” and with friendly waves, off they went to assume their duties.