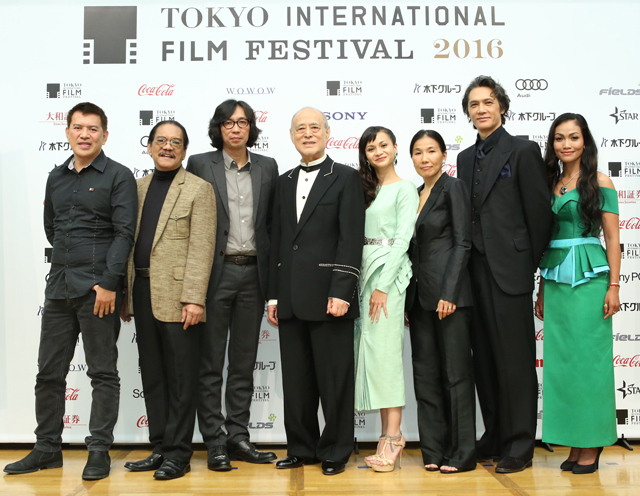 Ahead of the world premiere of the omnibus film Asian Three-Fold Mirror 2016: Reflections, the first-ever co-production between Tokyo International Film Festival (TIFF) and The Japan Foundation Asia Center, the three acclaimed directors and their lead actors appeared at a press conference to discuss the challenges and discoveries they experienced in the year since the project’s launch at the 28th TIFF. Their remarks left no doubt that the project’s aims had already far exceeded expectations.

The collaboration, which will continue until the 2020 Olympics and Paralympics, brings together Asian directors of global renown to create portraits of a character living in the region who is connected in some manner to another Asian country, and requires that they shoot on location in an Asian. The rest was left up to the directors, who reflected unique perspectives on their own nation’s society and culture, like the images in a three-fold mirror. Under lead producer Takeo Hisamatsu, the films are being created to help deepen mutual understanding and empathy through the powerful medium of cinema, and to provide opportunities to explore today’s Asian identity and ways of living.

What were the biggest discoveries for the directors?
For Japanese director Isao Yukisada, who shot his film Pigeon in Malaysia, it was the realization that each nation’s crew has its own shooting culture, but that the best collaborative filmmaking should make room for both. For Sotho Kulikar, whose Beyond the Bridge was lensed in her native Cambodia, it was that the cultures of Japan and Cambodia merged comfortably in the course of creating the film. For Brillante Ma Mendoza, shooting for the first time outside his native Philippines to make SHINUMA Dead Horse, the greatest discovery was that even a flight cancellation in snowy Hokkaido could be incorporated into his film, with cast and crew adapting readily to the change.

One of the Philippines’ most heralded directors, Mendoza’s film stars legendary actor Lou Veloso as Manny, an illegal Filipino immigrant who has worked odd jobs on a horse farm in Hokkaido for 30 years. When he is unexpectedly discovered and deported, Manny returns to his home village, only to discover that he no longer has a place there. Although he’s able to once again work with horses, he sees his own future in theirs: once they’re no longer able to work or race, they are completely expendable.
Veloso, visiting Tokyo for the first time, remarked: “It was so cold in Hokkaido! [Mendoza] didn’t tell me the story, he just told me to run in the snow, and I got a swollen foot the next day. The big horses there are as big as elephants, and I was scared of them.” On a more serious note, he added, “I think Japan is getting closer to Asian countries like the Philippines, Malaysia, Vietnam, Cambodia and Indonesia. I think this film represents what Japanese feel: ‘Don’t worry, we want peace.’ [I hope] we will all continue learning from other countries.”

Yukisada, who has periodically shot films in Asia for two decades, set his film in Malaysia, where his story focuses on a lonely old Japanese man, played by veteran Masahiko Tsugawa, and the Malaysian helper, played by Sharifah Amani, who provides the comfort and friendship that is sorely missing from his life. Yukisada recalled, “We put a lot of pressure on our crews in Japan. But in Malaysia, there was so much teamwork. It was much more relaxed than in Japan, where it’s really high tension. I think this kind of atmosphere was reflected in the film. The relationship between the old man and the young woman as they try to communicate is exactly our relationship between crew members.”

Tsugawa, looking exceptionally sharp in a rhinestone-studded tux, lamented, “The Japanese film industry is not seen as part of the Asian industry, which I think is a shame. We need to help people understand our culture, and we need to understand each other through culture, not just through economy and politics. Asia is a huge market, but Japanese filmmakers aren’t aware of that. I think we need to disseminate the message that it’s never too late. It’s a great opportunity for us to collaborate in this way.”
The popular actor also said, “My personality is different from the lonely guy I played. I’m a cheerful guy. But I was too serious about playing this role, and I made Amani-san cry! The director told me that she cried because I wasn’t friendly. The Malaysians are always friendly and help each other. I apologized to her after shooting.” Amani nodded and smiled, “This was my first time to experience method acting to that degree. But Japanese actors have a silent strength within them. It’s wonderful to work with people who are so passionate, so committed.”

Cambodian director Sotho Kulikar, who also plays a pivotal role in her film, explained that since the story bridges three eras, the 1960s, 70s and 90s, it had been difficult to shoot in Japan as she’d originally hoped. Instead, this touching story about a Japanese man, played by actor Masaya Kato, and his Cambodian love, played by dancer Chumvan Sodhachivy, was shot in Phnom Penh, where the man has just helped build the “Japanese Bridge.” It depicts bonds that are forged against the backdrop of the Khmer Rouge’s rise to power, when the man is forced to flee, and the aftermath. Said Kulikar: “I grew up hearing a lot of Japanese stories, seeing Japanese movies. It was a great honor to be able to merge these two cultures together. Noted Kato, “You learn much more by working overseas than by just visiting. Through this project, I realized just how many things I didn’t know [about the Khmer Rouge]. A project like this gives us a chance to understand new things. We had a mutual purpose to create a wonderful film. I think human interactions are the most important part of a project like this, and I think we should have more such projects.” His costar, Sodhachivy, added, “I’m a dancer, so usually I only perform on stage. All the time on set, Kato-san made me laugh. Even when I was supposed to cry, he was behind the camera, making jokes. The director and Kato-san helped me understand how to become the character, not just act her.”

Clearly speaking for everyone on the panel, Yukisada said, “When we began this project, we weren’t sure where we were going at first, but I was very excited. I think fantastic films have been developed, and it was a really worthwhile experience. I believe we need to collaborate with casts and crews from different countries and in different locations, to produce global-standard films.”