Press
Market
JP
EN
Outline
Films
Schedule
News
Tickets
Venue
PressOutline
MarketOutline
Return to List of News
2016.10.28 [Event Reports]
What They Talk about When They Don’t Talk about Sex[Symposium with Women Filmmakers: Visions for the Future of Indonesian Cinema] 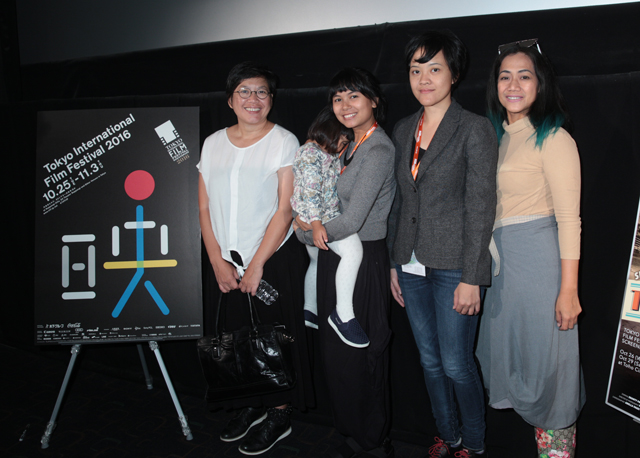 “The title itself indicates the minority status of women,” said film historian Yumi Matsushita, host of the Symposium with Women Filmmakers: Visions for the Future of Indonesian Cinema on October 26. As part of CROSSCUT ASIA #03 COLORFUL INDONESIA, the Japan Foundation Asia Center’s showcase of Indonesian films, four female guests – Nia Dinata, Kamila Andini, Mouly Surya and Meiske Taurisia – were invited to discuss the contemporary industry. Fortunately, the speakers were as intrepid and sassy as the dazzling siblings from Dinata’s new film Three Sassy Sisters, which had just received its world-premiere screening prior to the symposium.

Dinata said she still feels the existence of inherent sexism of Indonesian men and women. “I think we’ve become the minority in Indonesia,” she noted. “When we screen our films on campuses, it’s very different from back in, let’s say, 2003,” which was a “golden year of freedom of expression and openness.” Although Dinata appreciates screening her own films for university students, she said she feels marginalized when faced with the younger generation because, “Even women on campuses, students are more conservative.” Dinata’s openness is apparent not only in her words, but in her appearance (including the green tips of her hair). “I don’t cover myself and they know that I’m Muslim,” she says, admitting that she might agitate some of the conservative students. Still, in 2016, religion and social conventions make it necessary for women to cover their skin, and people seem to take sexual differences for granted.

However, a positive beacon for Indonesian women can be found in an unexpected place. Kamila Andini, director of Following Diana (15), who appeared with her small child, mainly talked about the position of women in the Indonesian film industry. Looking back over the history of Indonesian cinema, she noted, “It’s always been open for women.” When Indonesian cinema was “in a coma,” the Reformation changed the course of the industry in a positive way, and “The filmmakers who were actually there during the Reformation of Indonesian cinema, most of them are actually women.” That explains why, when Andini aspired to be a director, “There was no question anymore for me to think whether it is possible for a woman to become a filmmaker.”

Meiske Taurisia, producer of Kamila’s Following Diana and many other Indonesian art films, added more detailed insights about the industry, claiming, “Now the position for women in the film industry, it’s more into managerial areas, like producers. We do have women directors of photography, but so far it is still less than five.”

One Indonesian audience member, who was “shocked” by the openness and challenging subjects of the women’s films, asked about the aim of their filmmaking, and what they want to convey by defying conventions of sexuality and society. Mouly Surya mentioned her acclaimed feature, What They Don’t Talk about When They Talk about Love (13), a film about sexual tension between blind students and deaf teenagers. “It does happen,” said Surya. “I usually talk about sexual situations, which must have happened a lot in Indonesia since we have 250 million people in the country, so people are having sex there. We just don’t talk about it.”

“All of us are sexual beings, c’mon!” Dinata laughed with delight. “Otherwise there wouldn’t be a population. But we just don’t like to talk about it, exactly. What cinema is for, it’s for talking about something that has not been talked about in real life.” Judging from their relaxed intimacy during the symposium, Indonesian female filmmakers seem to have established a sort of mutinous community that never gives in to the patriarchy and social conventions. “We recognize the force of trying to make Indonesian women more conservative,” stated Dinata. “But film is also a power to really make society more diverse and honest, I think.” Whatever religious restrictions or societal conventions one may be facing, there is no denying that the four sassy sisters simply nailed it at the 29th TIFF.