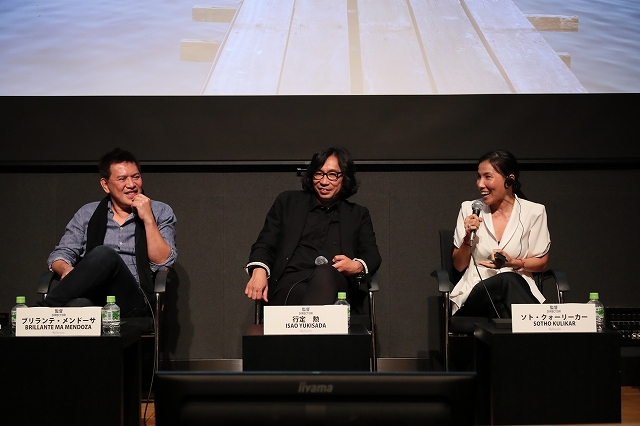 Three acclaimed directors from different parts of Asia have been brought together for the omnibus film Asian Three-Fold Mirror 2016: Reflections, the first of a series of co-productions between the Tokyo International Film Festival and the Japan Foundation Asia Center, in an annual project that will continue up to the Tokyo Olympics and Paralympics in 2020.

The project aims to reflect on the history and culture of Japan and its Southeast Asian neighbors Cambodia, Malaysia and the Philippines. While it provides its filmmakers with basic conditions, there is plenty of room for them to exhibit a specific style and approach to living, working, or loving as a foreigner in Asia.

Brillante Ma Mendoza of the Philippines, Japan’s Isao Yukisada and Cambodia’s Sotho Kulikar gathered at a symposium with lead producer Takeo Hisamatsu on October 27, to discuss the challenges they faced filming in new territories and across borders.

Asked about his film’s shoot in Hokkaido, where Mendoza’s SHINIUMA Dead Horse opens, Mendoza said, “There’s no snow in the Philippines. There are really only two seasons, rainy and dry, so shooting was very challenging. At the same time, it was fun, because it’s not every day that you can see snow. We played in the snow. Our trip was cancelled because of the snowstorm, and it wasn’t really part of the script, but because of its beautiful scenery, we maximized it and made it part of the story.”

After being deported from Obihiro, Hokkaido, Manny (legendary actor Lou Veloso) returns to his native Philippines for the first time in 30 years, where he comes to the disturbing realization that his fate mirrors that of race horses past their prime and no longer of any use. Mendoza’s film effectively contrasts the stark Hokkaido winter with the tropic swelter of Manila, showing both as ultimately unwelcoming places for our isolated protagonist.

Yukisada’s Pigeon is set in Penang, Malaysia, which is home to many Japanese retirees. The director discussed making the film to honor the memory of his grandfather, whose brothers died in a naval battle off the Malaysian coast during the Pacific War. The character of Yasmin (Sharifah Amani), a young Malaysian woman who takes care of the film’s senile protagonist (veteran actor Masahiko Tsugawa), is an homage to the late Malaysian director Yasmin Ahmad, as was the casting of Amani, who was discovered by Ahmad.

Yukisada found a moment for levity when discussing the eponymous birds of his tale: “Pigeons in Malaysia don’t fly. Our script called for the birds to fly, but they kept falling into the water. That scene on the beach where the pigeons fly? Tsugawa-san was supposed to be dead in the film, but he was swatting at the pigeons aggressively, trying to get them to fly. They just walked out of their cages onto the sand.” Midway through the shoot, the director started to worry that the title, Pigeon, was not going to work for this film. “We ended up filming pigeons flying in Chiba. That beautiful Malaysian sky you see with the soaring birds? That’s Chiba sky.”
Most of the drama of Yukisada’s film takes place mostly in an interior lodge, but occasionally steps out to traverse the sights of Penang – its alleys, backstreets, night cafes, and a beach which contains memories of the war past.

Kulikar shot her film Beyond the Bridge in her native Cambodia, but faced a bureaucratic nightmare in trying to secure the all-important bridge for filming: “The end of the film is in 1994, before the second bridge built by the Chinese was built. We had to turn off the lights on the bridge and close down traffic so we couldn’t see the Chinese bridge in the film. We also were shooting on April 13-14, which is the Cambodian New Year. Nothing is working during this time, so our permission request was stuck in City Hall. My mother, the associate producer, was burning so many forms of incense to give us the magic to get permission to shoot on this bridge.”

The film is set in different timeframes — the bloody civil war period of the early 1970s, and the more stable post-Khmer Rouge 1994 — and concerns a romance between a Japanese man (Masaya Kato) who helps to build the bridge, and a Cambodian woman. The rebuilding of the bridge becomes a melancholy metaphor for reconnecting the two lovers, Cambodia to Japan, and the brutal past to the hopeful present.

Despite the challenges, all three directors remarked about the fun they have on set. “It’s like we’re taking a vacation together and the staff was always taking photos to remember the scene,” said Mendoza. “They were always taking photos and sometimes the staff put them on Facebook. I always have to warn them not to put their photos on Facebook until we finish the film.” Yukisada added, “Malaysian staff are much more leisurely in their planning compared to Japanese staff, who are always running around and concerned about the time. In Japan, no one is having any fun and everyone is irritated. The atmosphere becomes very tense. I think Japan can learn a lot from how they work in Malaysia.” Producer Edmund Yeo chimed in, “There are cultural differences – but I thought working with Yukisada-san was a great opportunity to learn about filmmaking and how to control the shoot.”

Kulikar said that on her set, “Sometimes we shot 16 hours a day and we had to use everyone on the set because our crew is so small. I became an actress, my second AD became a production manager.” But the faith in the project is what pushed the crew. “I don’t think we could have shot this film without the love of the story,” Kulikar said. “With the love and commitment of both Japanese and Cambodian sides of the crew, we were able to pull it off in the end.” 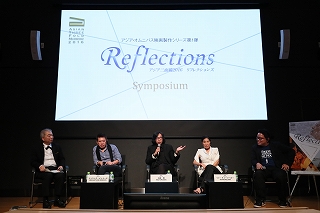