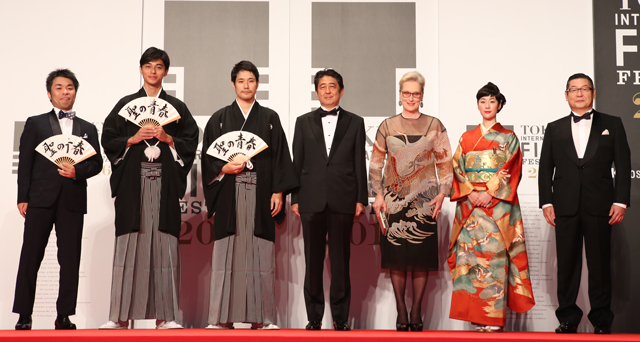 The light rain over Tokyo didn’t dampen the spirits of the thousands of fans who turned out to watch the filmmakers and stars descending the grand, red-carpeted staircase at Roppongi Hills on October 25, the opening day of the 29th Tokyo International Film Festival (TIFF). The carpet ran the length of the staircase and into the arena area, where the hundreds of guests representing the 200 films in this year’s festival lineup took time to greet fans and sign autographs.

Japanese Prime Minister Shinzo Abe greeted the stars and delivered closing remarks to the audience, joking, “This Red Carpet is so much more exciting than the carpet in the Japanese Parliament.”
The prime minister also appeared at the Opening Ceremony, where he greeted the audience with wishes for the success of the festival.

In remarks from the stage, Competition Jury President Beineix noted, “It is a great honor and a great privilege to preside over the jury of the Tokyo International Film Festival. Cinema is our common wealth. Movies are our contribution to freedom, cultural diversity and finally, peace. All we need is peace and harmony, and movies contribute to them in troubled times. Together with my fellow jurors, we will be looking for audacious, creative and surprising films. Let’s celebrate the great big screen. Let’s get together for great big dreams.”
Festival Muse Haru Kuroki introduced the Opening Film, Florence Foster Jenkins, describing it as “an inspiring true story about the world’s worst singer,” and brought star Meryl Streep to the stage. Following a shrieked from the audience, Streep yelled back, “I love you, too!” She then said, “Thank you. Arigato gozaimasu. It’s a great thrill to be back in Tokyo, a city that I love and love to explore. I hope you like the film very much!”

During the 10-day celebration, more than 200 films will be screened and there will be unique film-related events every day at the festival venues, including stage appearances, Q&A sessions and symposia featuring celebrated guests from around the world.

The Tokyo International Film Festival will be showcasing films from around the world and other film-related events until November 3, 2016 at Roppongi Hills, EX Theater Roppongi and other venue in Tokyo.