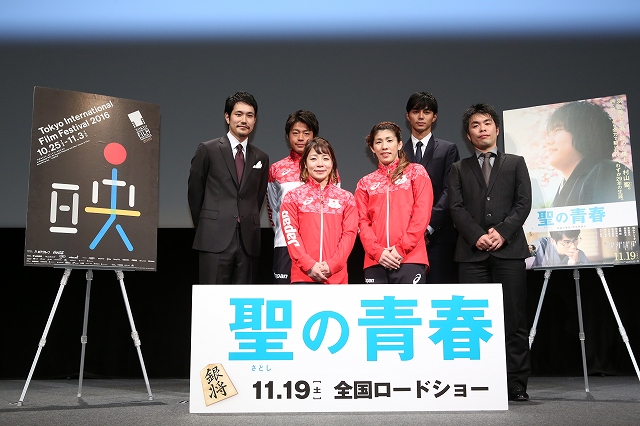 Stars Kenichi Matsuyama, Masahiro Higashide, and director Yoshitaka Mori were on hand to greet the audience before the sold-out screening of 29th Tokyo International Film Festival (TIFF)’s Closing Film Satoshi: A Move for Tomorrow on November 2 at EX Theater Roppongi.

Based on Yoshio Osaki’s bestselling novel of the real life shogi prodigy Satoshi Murayama, the biopic stars Matsuyama as Satoshi as he aspires to the game’s highest title of meijin over his rival, champion Yoshiharu Habu (Higashide), before tragically succumbing to cancer at the age of 29.

Matsuyama told the audience that he receives power from film festivals such as TIFF. “I’m always working with small groups of people when making films,” he said, “so getting energy from everyone at the fest gives me the courage for my next film.”

Matsuyama plays Satoshi unsentimentally; his character is, from beginning to end, obsessed with winning on his own terms. Late to parties because he wants to finish reading his manga, staying up all night playing mahjong, and – after one too many drinks – mercilessly berating those who don’t measure up to his standards of ambition, Satoshi is a difficult person to like. However, his single-minded pursuit of excellence in the face of death eventually wins over those around him. When asked if he identified with Satoshi in any way, Matsuyama – who shot to fame for his intense portrayal of another socially-awkward genius, Death Note’s “L” – replied, “We have different forms of art – shogi versus acting – but we share the same passion for them.”

Higashide, on the other hand, initially had reservations about the film’s subject matter. “To be honest, I was a little worried about making a movie about shogi since it has little movement and the rules are so complex. I thought that many young people wouldn’t understand it,” he confessed. “But the film is more about human relationships – how a person lives and the life of a young adult. I think this aspect can be understood by anyone in the world.”

Satoshi: A Move for Tomorrow treats its shogi with a solemn reverence, particularly in its scenes of silent, focused competition that amplify the sounds of ticking wristwatches, shifting feet on floor cushions, and the loud clack of the shogi tiles as they hit the game board. The players are quiet during competition but, once the match is finished, engage in a polite postmortem discussion to help one another improve.

Battles between Satoshi and Yoshiharu are particularly gripping. Matches can last an entire day, and the two fidget and sweat profusely from intense concentration, particularly the terminally ill and ghostly pale Satoshi. “Everyone in the world of shogi knew Satoshi had an illness,” Higashide elaborated, “but no one went easy on him. Everyone is staking their lives for their match. I was kind of a villain in the film, but I tried hard to portray that respect and sincerity in the film.”

Director Mori, coming off the success of his 2012 box office hit Space Brothers, said he studied boxing and martial arts films to capture this competitive aspect of the sport. But he also said he came away from his research dedicated to imparting the beauty of the traditional Japanese game. “There’s lots of talk today about artificial intelligence replacing humans,” he said, “but the human aspect of the game and match of shogi truly is an art. This is something AI cannot reproduce.”

Towards the end of the greet, three surprise athlete guests – 2016 Olympic medalists Saori Yoshida, Hiromi Miyake, and Takuya Haneda – also made an appearance to present the filmmakers with flower bouquets for their work on the film. “You’re going to need a handkerchief for this film,” said Miyake, who said she was brought to tears watching the players practice and compete so passionately.

Matsuyama closed with words honoring the film’s competitive spirit. “I feel like I myself competed while making this film, and I think it shows very well the life of a true competitor,” he said. “Shogi is a quiet battle, but I think everyone can understand and enjoy how it’s portrayed in this film.”