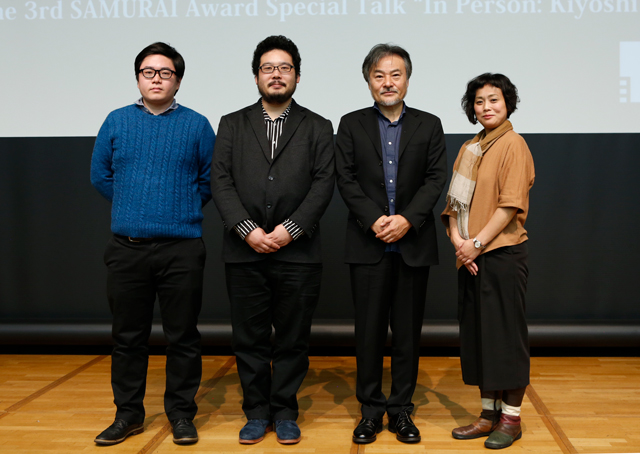 TIFF’s third annual Samurai Award for special contributions to the art of filmmaking went to directors Martin Scorsese and Kiyoshi Kurosawa. Scorsese was in Tokyo shortly before the festival began to promote his new film, Silence, which is set in Japan, but he wasn’t able to stay for the festival itself. So the “Special Talk” attached to the award was with Kurosawa only.

Home and abroad, Kurosawa is mainly associated with the horror and thriller genres, with films like The Cure, Charisma, and Pulse, but as he his long and prolific career continue — with 19 theatrical features and numerous other productions for TV and the straight-to-video market — it became clear that Kurosawa never saw himself as primarily a genre filmmaker. “I always intended to make a wide variety of films,” he said during the talk, when asked if he recognized his impact on horror movies.

Kurosawa emerged in the late ‘70s with a group of young filmmakers attending Rikkyo University, many of whom, like Shinji Aoyama and Makoto Shinozaki, went on to careers as major directors. He was mentored by Kazuhiko Hasegawa after he was asked by the veteran director to comment on a script he had written. Kurosawa, thinking it was expected of him, gave the script a negative review, and though Hasegawa didn’t follow his advice, he did eventually take him under his wing.

But Kurosawa’s first experience on set was working on Shinji Somai’s iconic ‘80s blockbuster Sailor Suit and Machine Gun as the “lowest” assistant director. “Somai’s set was very difficult, lots of detail in every aspect of the production,” Kurosawa remembered. “But in the editing process, much of this detail was thrown out, which left me feeling empty, because Somai didn’t seem to care about it anymore.” Though he stresses that he doesn’t work the same way, the experience taught him a lot about the process of reaching the finished product.

Eventually, he started making his own films, and didn’t get into horror until his third feature, Sweet Home, which was produced by Juzo Itami, who in the mid-80s was mainly known as an actor and producer until he directed The Funeral and asked Kurosawa’s opinion of it. When it became an unexpected hit, Itami agreed to work with Kurosawa on Sweet Home.

“At the time, Japanese directors weren’t making horror films, so there was no example to study,” Kurosawa said. “I used as my main reference American horror movies like Poltergeist.” Kurosawa was more interested in the scary aspects of the form, while Itami wanted more of a fantasy flavor in line with classic Japanese ghost stories. “I wanted to frighten the audience,” he said. “He wanted to entertain them.” The resulting hybrid turned Kurosawa into a more respected filmmaker and effectively launched the J-horror genre, though, as Kurosawa pointed out, that label didn’t take hold until The Ring.

But he wouldn’t actually become a widely known director until the late ‘90s, and in the meantime, he learned a lot about the craft by doing straight-to-video gangster movies. “I love that time,” he said. “I could make what I wanted, even though the budgets were always very low.”

His international cachet was secured with the “psycho killer” thriller The Cure, which premiered at the 1997 TIFF, where its leading man, Koji Yakusho, won the Best Actor prize. “At the time, film writers in Europe had discovered this new wave of violent Japanese films exemplified by Takeshi Kitano’s work,” Kurosawa explained. “And that year they came to TIFF hoping to discover something along those lines, and they saw The Cure.” Suddenly, the movie was being invited to festivals abroad. He was a minor star.

“I met a lot of younger Japanese directors at these festivals who had only made a few films, and I was being lumped in with them, even though by that time I was over 40 and had made more than 20 films,” he recalled. That changed once foreign critics recognized his unique vision, and then he was being feted with retrospectives covering all his films, “and not just the horror ones.”

Since then, of course, Kurosawa has branched well beyond horror, with films like Tokyo Sonata and Journey to the Shore, not to mention his first foreign-language film, Daguerreotype, a French co-production.

“Naturally, I want more Japanese people to see my films,” he said. “But when I consider how many people overseas have become fans of my films I am really encouraged to make the kind of films I want to make. The French like to discuss the theory of horror films, but they respond the same way everyone else does to scary things,” he explained. “While in Hong Kong they always want a ‘message’ in their films. But in the end, it’s all the same emotionally. I see myself more as an artisan than an artist. I work within each form to make something different every time.”

Does that mean he’s willing to solicit the kind of advice he once gave to Hasegawa?

“If people say good things about my work, I’m happy to hear it,” he said hesitantly. “But I don’t want to be influenced in that way. I want to decide everything myself.”