Apology and Update Regarding Online Ticket System Failure on October 15, 2016
We would like to once again extend our deepest apologies to everyone who was concerned and inconvenienced, particularly our customers, by the Online Ticket system failure affecting tickets for the 29th Tokyo International Film Festival, which went on sale at 12:00 on October 15 (Saturday).

We have investigated the causes of this incident and will be taking the following measures as reported below.

1.Incident causes and countermeasures
Reason for system failure
This year, we introduced a new system in order to make it easier and more convenient for customers to purchase tickets as well as to improve system operations. Immediately after the start of ticket sales on October 15 (Saturday) at 12:00, a large volume of simultaneous access to the website caused problems in the linkages between the pages for selecting designated seats and purchasing tickets with the payment server and this resulted in many customers being placed in the following situations.

(2) Customers were able to purchase their tickets and claim seats, but bought more tickets than they actually wished to purchase

We conducted design and load testing based on actual volumes of access from the previous years but the volume of access to the website greatly exceeded our expectations, and the system was unable to respond. As a result, not only did this result in delayed online access and timeouts, it also resulted in the system being unable to receive notifications issued by the company handling payments.

As the system for receiving notifications of settled payments from the company handling payments was operated using the same system as the ticketing system, this system was also impacted by the delayed responses resulting from the large volume of access. As such, notifications of settled payments could not be received, resulting in timeout errors. On the other hand, the ticketing system waited for certain period of time for the notification of settlement to be sent and when it could not be received, the ticketing system judged that the connection with the system of the company handling payments have been severed, resulting in the cancellation of the designated seat and other reservation information. 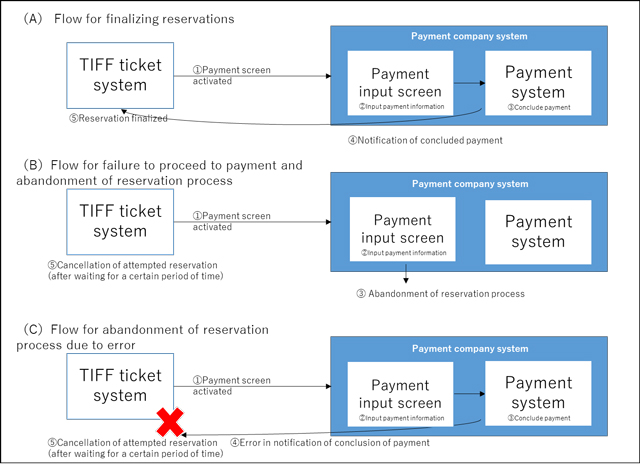 Dealing with System Errors
From October 20, in preparation for restarting sales, we strengthened the server capability and also improved the capabilities of the database server. In addition, we created a separate server on the ticketing system side for receiving notifications from the payment company system on the results of the payment process, so that the server was separate from the server for selling tickets. This ensures that a large volume of access does not affect the payment process. Furthermore, we changed the system so that if the notification on the results of the payment is not received from the payment company’s system, the reservation data, including the designated seats, will be maintained. As a result of these measures, we were able to restart selling tickets from October 20 onwards without any further issues.

2.Responding to inconvenienced customers
(1) Customers who were able to purchase tickets and proceed to the payment screen but were then left without a designated seat
・We have contacted the related credit card companies to cancel the credit card transactions of all customers in this position.
・Customers who paid the cost of their tickets and a commission fee for issuing the tickets at a convenience store will be refunded via transfer to their designated bank account or postal money order. We are currently moving forward with these procedures.

(2) Responding to customers who purchased tickets and secured seats but have more seats than they required
We have set up a program / screen which will allow customers to cancel the tickets they do not require and informed customers how to use this program.

(3) Measures in place during the film festival
During the festival, a window separate from the window selling same-day tickets was in place to respond personally to visiting customers affected by this issue.

(4) Inquiries
We established dedicated phone lines and online inquiry forms to respond to inquiries on this matter. However, immediately after the outage occurred, we received telephone calls and e-mails from a very large number of customers and at that time some customers were unable to get through on the phone. Our e-mail response time was also delayed considerably. We would like to apologize once again for our inability at that time to respond appropriately and rapidly to customers’ questions and concerns.

(5) Future measures
To ensure that no similar issues occur as we prepare for the next festival, we will be reviewing our systems carefully. We are also committed to doing all we can to win back the trust of everyone who has been supporting the Tokyo International Film Festival.
previous
[MOVIE] 3rd SAMURAI Award Special Talk...
2016.11.14 [Updates]
next
Dates Set for the 30th Anniversary Edi...
2016.12.21 [Updates]
Return to List of News
Daily News
Oct.25 - Nov.3, 2016