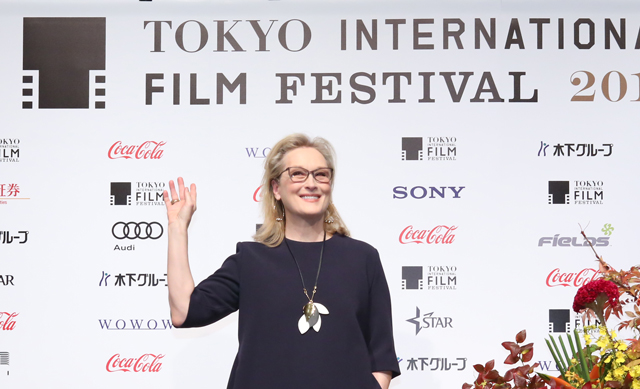 Florence Foster Jenkins is based on the true story of an endearing diva who became a legend when she attracted a full house at New York’s Carnegie Hall, despite being a terrible singer. Stephen Frears, director of The Queen and Philomena, teams up with Meryl Streep and Hugh Grant for his latest film.

Meryl Streep will appear on the Red Carpet and attend the Opening Ceremony to be held on October 25. 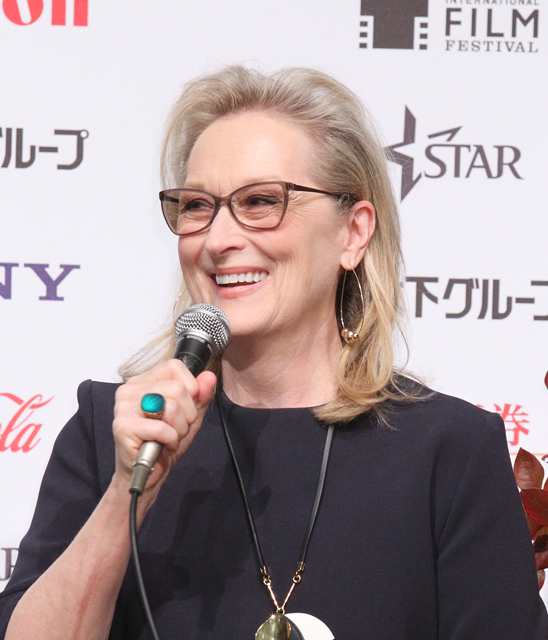 Notes and Quotes from the Press Conference
Opening greeting from Meryl Streep, star of Florence Foster Jenkins
Thank you for such a warm welcome. I’m so happy to be in Japan again. It seems like there are twice as many of you as the last time I was here.

Q: How does it feel to be in Tokyo to present your film Florence Foster Jenkins as the Opening Film of this year’s TIFF?

A: It’s very exciting and it’s a great honor that Florence Foster Jenkins has been chosen as the Opening Film. I’m very proud to be here representing the film. I bring greetings from Stephen Frears, Hugh Grant and Simon Helberg, all of whom are very busy working. But I’m currently unemployed, so I was available to come, and I’m very happy to be here.

Q: We all know that you have a beautiful voice and a great singing talent. What difficulties did you face, playing a true-life character who had no singing talent?

A: Yes, the person that I play, Florence, is someone who can’t sing very much but she loves music and she supports the musical life of New York City. She’s a very wealthy woman and she gave lots of money to support Carnegie Hall, Toscanini’s orchestra. But she secretly wanted to be a singer. She’s not unlike a lot of arts patrons today.
As to your kind compliments about my singing in other films, I did try to learn how to sing these arias properly, so I got a very good, true opera coach and he taught me the arias correctly. Then the last two weeks of the two-month preparation, we just screwed around with them.

Q: You’ve raised awareness of gender imbalance in the film industry, including a lack of strong female characters and ageism. What made you decide to take this role, and what’s the reality of ageism in Hollywood?

A: I don’t think there’s ever been a film in American film history that had as its leading person a 70-year-old character. So I was playing someone much older than myself. Somehow, I pulled it off. I think there has been ageism and a lot of so-called market-driven decisions. But I was 58 when I made Mama Mia!, and that was the most popular film I ever made. I think all these rules are being broken and thank goodness. I think a lot of the possibilities come from television, especially the long-form, serial television that we have now. It’s been very good for women and proven there’s an audience.

Q: You have a great relationship with Hugh Grant’s character in the film. I’ve heard that in your private life, you also put priority on your family and have a good relationship with your husband. Is there a secret to having a successful marriage?

A: I’m sure that it’s all because of him and his good nature. And it’s also that he’s an artist, and that helps. It would be difficult to be married to someone who had a different life, who didn’t have the serial obsessions that I have. But he has that in his work, as well, the fluctuations of mood and intensive connections with something. He understands that.

Florence and Bayfield shared that, too. They shared a dream about being connected to art in some way. In Bayfield’s case, he had a good idea of his own inadequacies in art. She was not burdened with that understanding of her own inadequacy. But they shared a dream of serving music and serving art, and that brought them together.

Q: In the film, your character is a bit obsessive about food, like potato salad, but the way you acted made her seem really charming. Do you yourself have any cravings?

A: I have a craving for really good sushi, but you can only get it here, so I have to come to Japan. I think all these idiosyncrasies of Florence in the film were true. She did not make potato salad, she did not cook. In fact, there was no kitchen in her apartment, they had to send out. She only ate sandwiches and ate potato salad. She was a true eccentric.

Yesterday we were in Kyoto and we went to a restaurant that had so many kinds of tofu. We have one kind of tofu at home. I’d never seen this kind of restaurant, and it was fantastic.