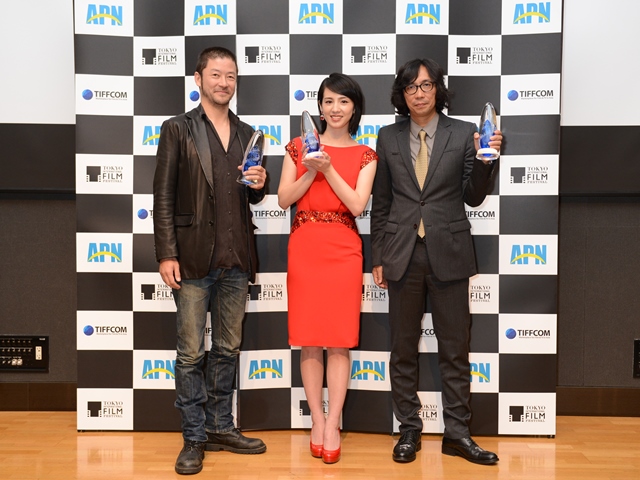 The Asia-Pacific Producer Network (APN) announced three recipients of this year’s APN Award to Japanese actor Tadanobu Asano, actress Nanami Sakuraba, and filmmaker Isao Yukisada at the APN Award Ceremony on October 26. The ceremony was taken place at the Roppongi Academyhills 49 Auditorium as part of 29th Tokyo International Film Festival (TIFF).
These tremendous movie stars and filmmaker Asano, Sakuraba and Yukisada has been honored their exceptional contributions to the film industry in the Asia-Pacific region.

APN, a network of film producers based i n the region who are active internationally, is holding its 11th general assembly in Tokyo during the festival. TIFF and TIFFCOM are collaborating with APN to welcome more than 100 producers, around 50 producers each from home and abroad, in hosting seminars and pitching events, as well as the APN Award Ceremony.

Here are some notes and quotes from the winners.

Tadanobu ASANO:
After the Sakuraba Nanami’s comments in Chinese and Korean, Tadanobu Asano followed her by his greeting with “Nǐ Hǎo” (Chinese) and “Anyong Haseyo” (Korean). This is all I can say but I have an experience of learning two film scripts in Mongolian. I think I can speak in any languages if it is a dialogue for acting. It is exceptional for having the gathering of such a large number of Producers. I will be delighted if the receiving of the award will lead to my appearances in the new films. The guests at the venue were in laughter when the world-class actor promoted himself.

Nanami SAKURABA:
My interest in China, Taiwan and Korea has led me to watch various films and TV dramas. It also led me to the studying of the languages. The experience has now led me to work. It is surprising because I never thought I will be working abroad. The overseas production and the building of the relationships with the Asian seniors have become a learning experience. I will like to polish my language skills and make an appearance in many Asian films in the future. （Following her comment she expressed her enthusiasm by adding “I will like to play an important role not only in Japan but also in Asia as well.” She spoke in fluent Chinese and Korean and surprised the guests at the venue.)

Isao Yukisada:
“Cross boundary” has been a recent theme for me. I was very pleased to receive this award when I was hoping to make a new self-discovery by crossing the boundaries. My ideas were often overturned during the overseas film shooting but I have learned that it is still possible to make the film. Jumping in to the environment voluntarily is the important thing. I think you will become a stronger person through the experience.


■ Profile of the Award Winners

Born in Kanagawa, Japan, 1973. Asano made his feature film debut with Joji Matsuoka’s Bataashi Kingyo in 1990. In 2008, he starred in Sergei Bodrov’s Mongol which was nominated for Best Foreign Language Film at the 80th Academy Awards. In 2010 Asano received two leading actor awards at the 33rd Japan Academy Prize with Kichitaro Negishi’s Villon’s Wife and Daisuke Kimura’s Mt. Tsurugidake. His role in Kazuyoshi Kumakiri’s My Man earned him the Best Actor award at the 36th Moscow International Film Festival. His latest film, Koji Fukada’s Harmonium opened in theaters on October 8. The film won the Un Certain Regard Jury Prize at the 69th Cannes Film Festival. 2017 releases include Martin Scorsese’s “Silence” and Yukiko Mishima’s Osanago warera ni umare. Other future releases include Martin Pieter Zandvliet’s The Outsider.

Born in Kagoshima, Japan, 1992. Sakuraba made her feature film debut with Tengoku no Basu in 2008. The following year, she was cast as voice actor for the lead female character in Hosoda Mamoru’s animated feature Summer Wars. In 2010 she starred in Shodo Girls and Saigo no Chushingura both of which earned her the Best New Artist Award at the 35th Hochi Film Awards, the “Best 10” New Actress recognition for the 84th Kinema Junpo Awards, Best Newcomer at the 53rd Blue Ribbon Awards, Best New Actress at the 20th Japanese Movie Critics Awards, and Newcomer of the Year at the 35th Japan Academy Prizes. Other lead appearances include TV series Twin Spica (NHK/2009), TV drama Limit (TV Tokyo/2013), feature film The After-Dinner Mysteries (Toho/2013), and feature film Attack on Titan (Toho/2015). She recently starred for the first time in a Japan-Korea coproduction Trumpet of the Cliff directed by Sang-hee Han. The film was released in September. In the same month she made her overseas debut appearing in episodes 5 and 6 in Taiwanese TV series Love of Sandstorm in a Chinese-speaking role. Upcoming features include John Woo’s Manhunt in which Sakuraba plays a major role. The film is scheduled for a 2018 release.

Born in Kumamoto, Japan, 1968. Among Yukisada’s many accolades are the FIPRESCI Prize at the 5th Pusan International Film Festival for his 2000 film Sunflower, and Best Director at the 25th Japan Academy Prizes for Go. Yukisada went on to make numerous hits such as Crying Out Love in the Center of the World, Year One in the North, Parade, Entaku, and Pink and Gray earning him acclaim in Japan and abroad. Recent features include Japan-China coproduction Five Minutes to Tomorrow, which was also released in Mainland China in 2014. This year Yukisada took part in “Asian Three-Fold Mirror”, a project jointly headed by the Tokyo International Film Festival and the Japan Foundation Asia Center in which he serves as one of three directors helming a three-part omnibus feature. The feature includes Yukisada’s Pigeon alongside works from Filipino filmmaker Brillante Mendoza and Cambodian filmmaker Sotho Kulikar. The film enjoyed its world premiere at the 29th Tokyo International Film Festival. Upcoming releases include his Nikkatsu Roman Porno film Aroused by Gymnopedies slated for a November 26 release, and Narratage for a 2017 fall release. His 2015 short Utsukushii Hito is being shown in a series of charity screenings around Japan and film festivals in Japan and abroad.