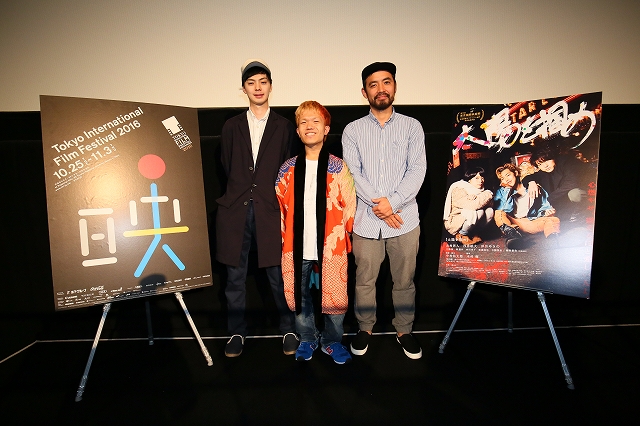 Here we witness the birth of a brand-new star. In Grab the Sun (2016), a selection in TIFF’s Japanese Cinema Splash section, Yoshimura Kaito transforms himself into a gauzy, destructive, rebellious rocker with such a heart of gold (and hair to match), that he promises to become a modern-day James Dean in Japan. Kodai Asaka and Yukino Kishii also alluringly shine in Yutaro Nakamura’s freshman feature, a fleeting drama about juvenile sufferings and male bonds. Nakamura successfully captures the raw emotion of three actors, whose performances may have not been possible if they were not now in their youth, as are the protagonists.

Yat (Kaito) is an up-and-coming musician, and Takuma (Asaka) is a photographer who shoots Yat in an ebullient way. Yumika (Kishii), Takuma’s ex, and the two have been the best of friends since high school, but then Yat cannot continue ignoring his attraction to Yumika. As the narrative proceeds, Yat struggles in the world of drugs, introduced by Takuma, and begins moving further toward violence.

After the world premiere screening of Grab the Sun on October 26, Nakamura joined the enthusiastic crowd for a Q&A with Yoshi Yatabe, TIFF’s programming director. “Refreshing,” said the freshman filmmaker when asked how he felt after the premiere of his first feature film. Nakamura also said he sensed that he was “played by the film” this time. In terms of previous short films, Nakamura could rely on “own backbone;” but this time he incorporated “entertainment aspects” by “considering the audience.” Nakamura now believes that “a purpose has been achieved by screening the film to the general public,” revealing that he added a female character to the central male relationships to “make the movie more entertaining” because “it’s exciting to see men competing for the same woman.”

The director discussed how he had approached the intrepid character Yat, with his wild temperament. Nakamura said he wanted to “depict Yoshimura as he really is,” in contrast to Asaka and Kishii, whom he praised for their “professional-level acting.” Yat’s wildness fiercely agitates the solidarity of Takuma and Yumika, and seems to be something inherent in Yoshimura himself. “He is naturally like that in private,” noted Nakamura, “though he was diligent on set.” Despite playing the role of an aspiring musician, Yoshimura had garnered no experience of music before shooting. “We went to karaoke together,” the director revealed, and “He sang something like the Beatles with fine pronunciation. It might not have been correct English, but it was really convincing. He is full of confidence.”

One young audience member asked about the Yumika character’s cunningness and why she is sometimes depicted in that particular way. “I don’t want to depict women like angels,” replied the filmmaker, “Even cunning can be part of cuteness. I’m not good with overt pureness. I used to incorporate erotic scenes in my student films, and too much exposure without concealing any ugliness can be a plus for films.” Therefore, right after an ambiguous rape scene in the film, is the time he finds “Yumiko’s attraction starts looming.” Speculating that Yumika might be the “Sun” of the title, Yatabe asked what Nakamura had in mind. “It could be Yumika,” answered the director, “but the audience can say ‘that might be me!’ as well.”

The next question came from a 62-year-old man at the back, who interestingly compared Grab the Sun with dark contemporary Japanese films such as Hiroshi Shoji’s Ken and Kazu, winner of the Best Picture Award in last year’s Cinema Splash, and Yosuke Okuda’s The Dork, the Girl and the Douchebag (15). All of these films are similar in the way their narratives involve marijuana and drugs, and the gentleman was wondering if this is a contemporary trend for young filmmakers. For Nakamura, Takuma is “a wealthy have-it-all who is not satisfied with his life,” and his involvement with drugs is “self-mutilation stemming from youth.” As opposed to Ken and Kazu, Nakamura’s interest does not lie in a realistic depiction of Japan’s underworld: “I wanted to depict the emotions young people feel in the town they live in,” treating the sensitive drug issue as “daily life with information I generally know.” Actor Yuya Matsuura, who unexpectedly appeared as a surprise guest, shared insightful opinions about drug issues. “My parents loved ‘that stuff’,” he boldly declared. So talking from actual experience, “It’s a universal issue, not something that particularly exists only in the present day.”

On a final note, the programming director asked Nakamura about his next project. “My youthful days have finished with this film,” claimed the filmmaker. Rushing through about four productions in three years, Nakamura feels now he has calmed down and realized one important factor in life: “It’s better to do something that I enjoy. Of course I enjoyed the production of Grab the Sun. But I want something tender and calm, like jogging.”

After its bow at TIFF, Grab the Sun will be released theatrically across Japan on December 24.