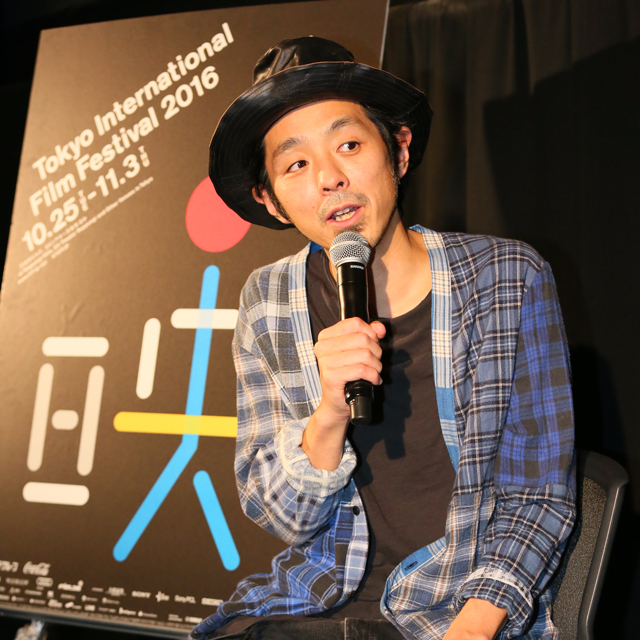 “Welcome to Hell!” said TIFF Japan Now Programming Advisor Kohei Ando gleefully, as he picked up the microphone after the section’s inaugural screening of Too Young to Die! An enormous hit on its Japanese release in June this year, the film also nabbed the Audience Award and drew SRO crowds at the New York Asian Film Festival in July.

While Japan Now was established in order to bring the best of Japanese film to international audiences attending TIFF, it soon became clear that the screening had attracted some hometown devotees, as well. During an uproarious Q&A session with writer-director Kankuro Kudo, fans competed to claim the crown of Most Multiple Viewings (the title went to two attendees, both of whom had seen the film 12 times). (!)

A raucous, righteous cross between Groundhog Day and The Rocky Horror Picture Show, with odds and ends (more odd than end) of other outrageous, off-kilter comedies but like nothing you’ve ever seen, veteran hitmaker Kudo’s instant cult classic tells the story of awkward schoolboy Daisuke (Ryunosuke Kamiki), who dies with other classmates in a freak bus accident that kills all aboard, with the exception of Hiromi (Aoi Morikawa), the girl he loves but never got the nerve to kiss. Daisuke’s death is mistakenly ruled a suicide, and several goofy CG moments later, he finds himself among the other newly damned Way Down Under, shackled to a board in an infernal classroom, where he’s forced to learn the rules of Hell.

The longtime denizens of his new Home for Eternity are green-horned demons who worship heavy metal and wish the new kid would join their band. Appalled, Daisuke soon discovers a loophole: he can appeal his case to the 30-foot-tall Lord of Hell, and if he’s reincarnated, be returned to his lady love for one more chance. But the appeal involves a series of humiliating “auditions” back on earth, as he attempts to prove that he’s up to the task. Each time he gets closer to reaching Hiromi, he makes an idiot move and winds up in Hell again, as a lesser form of life. Er, death.

Despite the increasing loopiness of the challenge, Daisuke refuses to give up hope. Even in Hell, doing the impossible in the name of love is an infectious notion. Screaming demon Killer K (Tomoya Nagase) — like each of the damned — has his own tragic backstory, and he’s all too willing to help out. But only as long as Daisuke will help his group win the battle of the metal bands. His favorite song? “Welcome to Hell, Motherf—er!!!!”

“How would you describe this fantastic, peculiar film — as a rock musical?” asked Ando. Kudo jumped right in: “It’s a rock musical youth comedy, at least that’s what I always say. The idea came from talks with [Tokio singer] Nagase, and we decided we wanted to do a rock film like Jack Black’s School of Rock and Tenacious D, about losers. In Japan, rock films are all about the relationships between band members. We wanted to do it crazier, stupider. So we thought, why not set it in Hell?”

But depicting Hell proved to be a challenge, especially on a budget. Kudo admitted that he finally began to feel he shouldn’t try to hide his two decades of experience in theater when he was directing films. “I thought I could put my skills to use, so we created a theatrical Hell. It’s Hell — so I figured, why not?” Building it on a set, without the use of green screen for CG, helped cut costs but also allowed the filmmaking team to conjure up some vintage magic, like in the old studio days. Said Kudo, “It’s like Keisuke Kinoshita’s Ballad of Narayama, where you can see the crows actually hitting the studio wall [which is supposed to be sky]. That really encouraged me.”

Kudo’s team storyboarded everything to achieve the film’s stage-set vision of Hell, and to choreograph the action in advance. They also cleverly created a scrim that could effectively double the studio space, with one set in front, one behind. “You know the scenes where Daisuke is running? He just ran in place, and we moved the scrim behind him. It was like an analog-style production.”

Praised for the music, Kudo noted, “I was originally planning on hiring a gospel singer, but he said, ‘But it’s about Hell. And it’s a positive view of Hell!’ Then I thought, okay, let’s change it to blues.”

Kudo mentioned that the beyond-Halloween makeup enabled the actors to do things they’d never before done. “We had this rule that all cool-looking people had to go to Hell,” he laughed. “I’m interested in characters who never grow up, because being childish is endearing. I have no interest in characters who grow up. But the characters around the main character do change, because of him.”

“Are you going to do a sequel?” asked one audience member (a six-time viewer). “We already threw Hell away, so if we do a sequel, Hell’s gonna have to be different,” Kudo replied. “No problem with everyone coming back, though. In a normal film, when characters die, they can’t appear in part two. But since everyone is already dead, the same characters can come back. We can even turn it into a franchise with the same actors every time.”