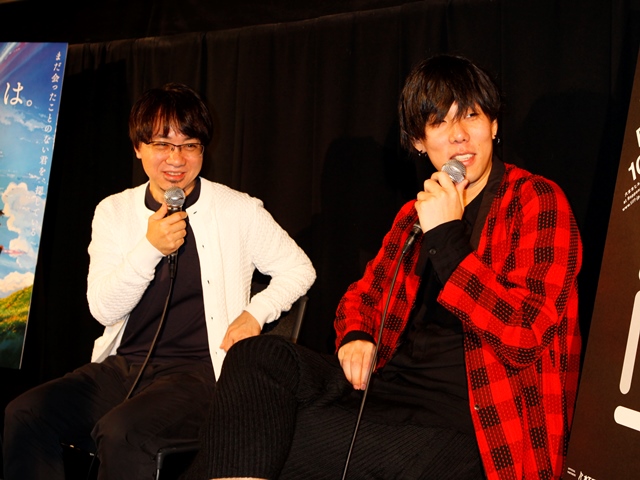 The press poured into the already packed theater for the Q&A session following the October 27screening of Makoto Shinkai’s juggernaut your name. (Yes, it is maddeningly spelled thusly, perhaps reflecting youth culture’s insistence on specious punctuation.) One of the biggest draws of TIFF’s Japan Now section, the animated sci-fi fantasy hasn’t left the headlines since opening at No. 1 on its first weekend and refusing to budge from the spot for the next two months. Now entering its 10th week at the top spot, the film has earned over $160 million. This is a staggering bounty at the Japanese box office, where $10 million is considered a blockbuster. Only Studio Ghibli has ever topped $100 million for an animated work, but call the Guinness Book: records are sure to fall.

Already the fifth highest grossing film of all time in Japan, and looking solid for revenues to exceed the $200 million mark, your name. continues to draw in, enchant and mesmerize new audiences every day (as well as proving addictive: its biggest fans are viewing it double-digit times). The many foreign faces in the TIFF audience were also a reminder that your name. is on the brink of global breakout success. It has won Best Animated Feature awards from a slew of international festivals and is now set to be released by Funimation in the US in time for Oscar consideration.

With credentials like these, one would expect the film’s creator to bask a little in his newfound glory. But Shinkai’s humility is legendary. He has publicly expressed dumbfoundment at the film’s outrageous success, and when asked about his approach, his methodology, his intentions, consistently deferred to the film’s composer/singer-songwriter, Yojiro Noda, who joined the master animator for the Q&A.

Japan Now Programming Advisor Kohei Ando lavished (well-deserved) praise on Shinkai for his “incredible fusion of images, sounds and words, which taken together give birth to a new world, and create an epic poem.” How, he wondered, had the two worked out their roles in the collaboration?

Recalled Shinkai, “When I knew that Yojiro was joining the project, I was really excited. I was even hoping that he could write all the dialogue, not just the lyrics to the songs, as well as coming up with the title.”

Laughed Noda, “I couldn’t believe the title of the film was taken from my song. I wanted to concentrate on writing the music, but the director kept asking me for more lyrics, for dialogue. I didn’t want the lyrics to get in the way of the film, but he was pretty pushy about getting more, so I stopped worrying too much about [whether they were intrusive]. Actually, I enjoyed writing the score more.”

Ando asked, “Isn’t it really unusual for directors to incorporate songs reflecting the story into their films?” Said Noda: “Shinkai-san wanted to do something that hadn’t been done before, to make a film in a new way, by weaving together song lyrics and story. His passion and this unique approach resulted in a film that was really well received. But it’s difficult to figure out [in retrospect] exactly why that is.”

It may take a Harvard Case Study to identify the particulars, but it’s clear enough why the work has been so widely hailed: It is jaw-droppingly beautiful, with Shinkai’s trademark background visuals, which are practically photorealistic in their heightened delineation of urban and rural detail (the film features real-life locations in the director’s native Nagano Prefecture, in Gifu Prefecture and in Tokyo), and the emotional grounding of his characters, no matter how fantastical their situation may be.

The animator adapted his own bestselling novel for the film, which tells the story of Mitsuha, a high school girl living in the town of Itomori, and Taki, a high school boy in Tokyo. For reasons that take much of the film to work out, the two wake up in each other’s bodies one morning, which wreaks havoc with their home and social lives. After frantic communications to get at the truth, they gradually begin intervening in each other’s lives in ways both constructive and not so, and without quite understanding it, fall in love. Eventually, they realize they are living in different time frames, and must find a way to get back in sync — and to stop sharing bodies — before it’s too late.

Noda recalled, “The situation between these two characters is so strange, and their love is so unusual. In the process of writing the lyrics, it was like I was living vicariously through them. I was trying to reflect their experiences, trying to imagine what kind of words would be suitable.”

A young fan asked whether Shinkai planned the happy ending from the beginning. “Yes, I did,” he responded. “Reality can be harsh, so I wanted something incredible to happen in the film, and then have a happy ending. When I saw the lyrics that Yojiro wrote — just a little longer and we can be together — it confirmed that we could have a miracle and end the story in a happy way. Each one of us hopes that a good relationship can last for a long, long time. So hearing those lyrics gave me the power to bring them together, to have them meet and have a good relationship.”

Asked whether he had intended to make the film so beautiful, with such a beautiful story and beautiful music, Shinkai said, “I wanted to have overwhelming beauty, with too much of everything. That’s why I asked Yojiro to create so much music and so many songs.” Turning to Noda, he asked, “Did I ask you to write too much?”

Noda didn’t hesitate. “Yes. It’s over the top. He even adjusted the length of scenes to match the music. It really felt like we were collaborating, making the film together, that we were in the same boat. That’s why, even when he okayed something, I didn’t really want to stop. I wanted to go beyond that, to really make it perfect. One of the most amazing things about Shinkai-san is that he never compromises. Of course that’s necessary in filmmaking. But there was no adjustment of the energy that he put in. He put equal effort into every single element of the film.”

Shinkai couldn’t resist a final word: “As you all probably know, Yojiro is exactly the same.”

Makoto Shinkai is due to receive a TIFF ARIGATŌ Award during the closing ceremony on November 3.