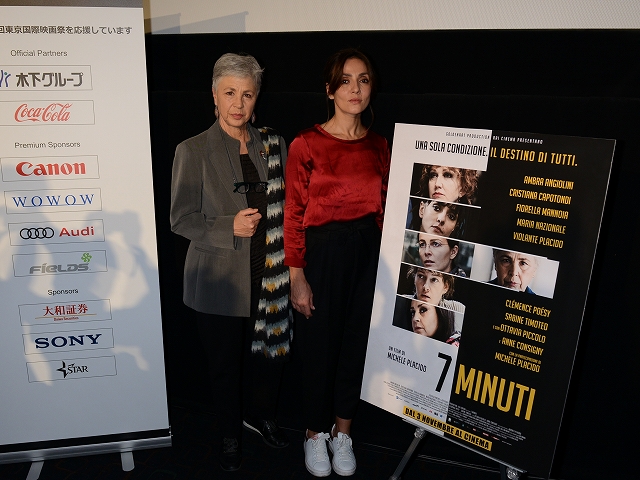 How far would you go to keep your job, even if it meant making sacrifices you could ill afford, even if it meant that you might set a dangerous precedent for other workers? That is the question at the center of the heart-pounding thriller 7 Minutes, screening in TIFF’s Competition section. The 12th film from Italian actor-director Michele Placido, adapted from a stage play of the same name, the Italian-French-Switzerland co-production — fittingly multinational, like its subjects — is based on a true story. The real-life outcome, which is far more unsettling than that seen in the film, was revealed by the film’s stars at a press conference on Wednesday, Oct. 26.

Ottavia Piccolo, the veteran actress who plays the film’s anchoring force, Bianca, explained: “The actual incident [that inspired the play and film] happened in France in 2012, and it was exactly the same type of fight with the management. As a result, the plant was closed down and all the workers were fired. The workers tried to buy the plant back, but they could not raise enough money from the banks, so the plant stayed closed. Similar things are happening in Italy and elsewhere today.”

The extraordinarily tense proceedings of 7 Minutes follow the eleven women who comprise the Varozzi Textile Factory Workers’ Council, as they await the verdict on whether the new owners of their plant will keep it open or shutter it, putting 300 people out of work. The women, we soon learn, are not only locals; they hail from Albania, Rumania, Africa and points beyond. While this may be immediately obvious to Italian audiences, these revelations about the multinational nature of the town’s workforce, and the daily racism experienced by the women, arrive only gradually in the film, deepening and strengthening its force.

The two Varozzi brothers, aging owners of the factory they inherited from their father long ago, are poised to sell the majority of their shares to a French corporation. The new boss is a woman, Madame Buchette, and she pays the plant a visit — “just a formality”— expecting all the contracts to be signed and sealed so she can get back to Paris by dinnertime. Over the 5 hours during which the formality is deliberated, food eaten and stories told, the head of the Workers’ Council, Bianca, is forced to sit nearby, witnessing but not participating. It will be her thankless role to report the results of the meeting to the council.

Meanwhile, the other 10 women wait impatiently in a room nearby, bickering, teasing, sharing worst-case fears, and gradually, growing suspicious. When Bianca finally returns from the vipers’ den, she has letters for each of them. While she assures them they’re not losing their jobs, they must vote on whether they will accept the proposed new contract. Their letters set out the details: To keep their jobs, the factory workers must give up 7 minutes of their lunch hour. It is not until later that we learn lunch is only 15 minutes long as it is.

Judge and jury, the eleven women must decide not only for themselves, but for all of their coworkers, whether or not to accept the proposal. Encouraged by the ever-placid Bianca to “read what’s not written” — to think and talk it through thoroughly before voting, the debate ebbs and flows, with 10 in favor, one against; then it grows heated, abates, rages back to life and eventually, although votes change, it must come to an inevitable end. “It’s like asking, ‘Can I take a hammer to your hand or your foot?’” laments one of the characters. Another protests, “But the president is a woman. She understands. We should give her a chance.” The women, so disparate, so desperate, realize they are being held to ransom. Before the final vote, there will be further recriminations and confessions, a resignation and even a birth.

“I think this is an important film, that this film has a universal, global meaning,” said Piccolo during the press conference, “and I’m glad I could bring it from Italy to show it here.”

Said her costar, Ambra Angiolini, who plays the hot-headed Italian Greta in the film, “I like women like Greta. She is strong; she has a lot of rage and depth. She wants to say what she really feels without filtering. She tries to fight for dignity and justice, and finds it important to fight for what’s meaningful.”

Piccolo concurred: “I think each of the women in the film has a different opinion about how they should play the characters. I tried to depict a real woman, and I do resemble Bianca a bit. I think Ambra also resembles Greta [at which point Angiolini playfully pretended to hit her with a water bottle].

Asked how the director captured such drama from each of the actresses in the film, as it spirals to its conclusion, Angiolini said, “He used three or four cameras during shooting, as if we were in a theater, shooting all the characters at the same time, not one by one. He was building up the atmosphere and trying to capture not only what was on the outside, but on the inside of each character as we made our decisions.”

Added Piccolo, “I think this style of shooting is quite unique compared to conventional films. It really felt like a theatrical performance. Each one of us had to be completely immersed in our role, and it gave us a lot of power.”

“Power” is an essential component of the film, as the women come together to fight against its abuse, as well as to find their own wellsprings of inner strength. And something else, equally vital: “My father is a worker and my mom used to work for a long time,” said Angiolini. “Being a worker means that you have a heart, and it’s important to have a heart.”