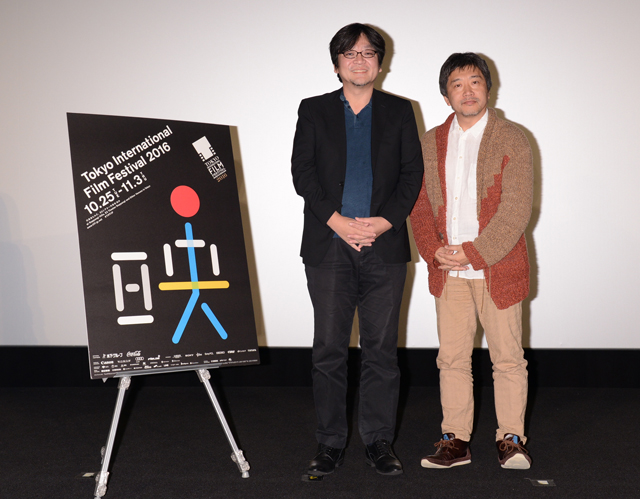 Animation lovers who came to watch TIFF’s October 26 screening of Wolf Children, the 2012 hit from Mamoru Hosoda, were in for a special treat: Both Hosoda and director Hirokazu Kore-eda took the stage after the film for a free-flowing conversation about the interesting parallels in their work.

The similarities between the two acclaimed directors aren’t immediately obvious. Hosoda, the subject of TIFF’s Animation Focus retrospective — titled, appropriately, The World of Mamoru Hosoda, broke through in 2006 with The Girl Who Leapt Through Time before going on to direct Summer Wars, Wolf Children, and The Boy and Beast, all big, bold pieces of box office-busting animation.

Kore-eda, on the other hand, works exclusively in the live-action realm, and creates naturalistic, contemplative works, like Nobody Knows, Still Walking and Our Little Sister.

Nevertheless, the two directors found a lot of common ground in the hour-long discussion in front of the still-sniffling, post-Wolf Children crowd.

For one thing, as Hosoda noted at the beginning of the talk, fathers – or, more accurately, the absence thereof – are a thread running through both directors’ works.

“Growing up, my father was basically non-existent,” said Kore-eda, “I don’t include fathers in my films because I can’t express them. Them not being there is more realistic for me.”

Hosoda shared a similar story of his estranged father, speculating, “Maybe that’s why this theme appears in my movies. There’s some kind of attractiveness to a missing father. You almost feel his existence more because he’s not there.”

Kore-eda agreed, saying that in both Hosoda’s The Boy and the Beast and his own Our Little Sister, one can feel “the shadow” of the father figure looming over the characters.

Mothers are another theme that ties both directors together. Hosoda explained that his mother, who had been hospitalized for 10 years, passed away while he was making Summer Wars. He created his next film, Wolf Children, the story of a single mother raising two kids, as an “apology” to his mother, he explained to Kore-eda.

“People don’t usually take up these issues in animation,” said Hosoda. “I myself thought I was crazy to do it.”

Kore-eda revealed his mother also played a large part in his latest film, this year’s After the Storm. To help prepare actress Kirin Kiki for the role of the matriarch, the director provided her with his mother’s postcards, paintings and even glasses, which ended up appearing in the film.

“It was a very strange experience,” Kore-eda remarked, “like being able to get into a time machine and go back to the past.”

After the Storm was shot in the very area of Tokyo in which Kore-eda grew up, a fact which provided yet another parallel between the two filmmakers: the countryside village in Wolf Children, Hosoda admitted, is based on his own hometown in Toyama.

“My staff came to my hometown to draw it, but I felt a bit embarrassed. These are the best animators in the business, and there’s just nothing there,” he laughed, adding he had a similar time-traveling experience when voice actor Aoi Miyazaki, who played Wolf Children’s mother, also came to see his hometown.

“[Miyazaki] and my mother don’t look anything alike, but I felt a connection, like they were the same person. It was a special feeling.”

Both Hosoda and Kore-eda showed a certain resistance, however, to being labeled as directors who focus exclusively on films about family.

“A lot of people say I’m a ‘family director,’” said Kore-eda, “but I don’t feel comfortable with that. Maybe I’ll move away from that theme for a while.”

“Me too,” Hosoda agreed, “especially when I made Summer Wars. But I’m not so much interested in stories of families as I am in stories of children growing up.”

The directors ended their evening of parallels by giving the audience a sneak peek into the films on which they’re currently working. Kore-eda revealed his next film also features an absent father, but the way in which that father is absent is entirely new. As for Hosoda, the first draft of his new screenplay, which “includes a father figure, but isn’t about fatherhood,” has just been approved.

Both films are expected to be released around the same time in 2018 – just another parallel between these surprisingly interconnected filmmakers.

The World of Mamoru Hosoda runs through October 31.