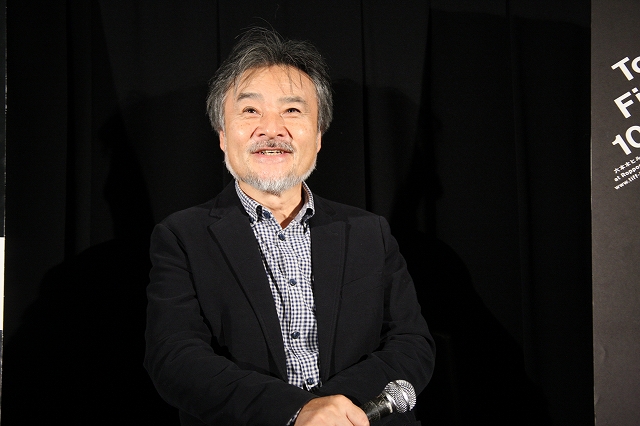 Internationally acclaimed director Kiyoshi Kurosawa appeared after the October 27 screening of his new film Daguerrotype, part of TIFF’s Japan Now section. The first foreign-language film shot by the Japanese auteur, Daguerrotype presents a new direction in his oeuvre. It is set in France and features a fine cast of francophone actors, including Dardenne brothers stalwart Olivier Gourmet and French-Algerian star Tahar Rahim.

During the post-screening Q&A session, Kurosawa explained: “There was originally the idea of a horror story. When the idea came up of making the film in France, rather than trying to simply just focus on the horror side, I added the love story.”

Kurosawa, who helped redefine and revive the genre of horror in Japan, has deep roots in kaidan, the traditional type of Japanese ghost story. He gave a quick explanation of the tradition in regards to his film.

“First of all, there is no ghost to begin with,” he said. “There are a man and a woman in a love relationship. They’re both alive. And in the middle of the story, the woman passes away. Even after she passes away, the relationship between the two deepens. And that is the typical style [of kaidan]. The story continues and there are grudges, mainly coming from the woman.”

He added, “But I think there is a certain format for the Japanese kaidan, which is that the feeling that you have right before your death becomes much more enhanced after you die. And that’s what remains. So, if you had the strongest of grudges right before you die, that grudge becomes ten or a hundred times stronger. The same thing can be said for love. If you love somebody right before you die, then that feeling becomes so much stronger.”

Asked about how the story had changed once he had secured French producers and knew that he would shooting in France, Kurosawa responded: “There was one thing that I had already determined from the very beginning of this film, which was that there was to be a Western-style ghost story and also element of a Japanese ghost story. These are combined. Because the mother has already passed away, she appears from the beginning of the story as a ghost. However, the daughter, Marie, actually has very much the feel of a Japanese ghost, when she appears in the middle.”

One of the things that makes Kurosawa’s ghosts so haunting is that instead of genre-bound symbols or clichéd one-dimensional characters, in their afterlife, they develop a life of their own. He explained his thoughts about this and how it relates to the character of Marie: “What you had in your thoughts, something that did not exist, becomes a reality and after it becomes a reality it becomes independent. Now with that illusion there’s a person that exists. She’s thinking, ‘How can I continue to go on? How should I live?’ And at the same time there is a real person that needs to communicate with that person. That itself is extremely interesting. She’s still ‘alive’ in a way that she can still continue and deal with a real living person. And I think it’s quite difficult for us, the living, to imagine what would happen after a person passes away. But in my imagination, I try to create the character by thinking of how she would feel, dealing with real life and a real living person.”

After Marie dies, she continues her relationship with Jean as a ghost, being a physical presence, going so far as to make dinner – something that one audience member remarked on as being somewhat un-ghostlike. To which Kurosawa slyly replied, “Maybe this is the first time, but there might be ghosts like that.”

At one point in the film, reality and illusion come into question as the ghost of Stéphane’s wife torments him and he totters into alcoholic delusion. Suddenly, an old woman unexpectedly appears at his doorstep for a photo session. As they prepare to shoot the portrait, she remarks that death is an illusion.

When asked why he had included this scene, Kurosawa gave a very personal response, admitting, “The reason is that I’m getting old. Getting old means that I have more acquaintances, relatives and friends who are passing away. But every time that I think about them, I think of how they would evaluate my films. So, even though they aren’t here in this real world, there is some kind of communication between myself and those who aren’t here. That’s why I wanted to include that part in the film.”

Kurosawa also discussed his first experience shooting in France. “I had this strong impression from French films of the 1960s,” he explained, “where young people become involved in crimes and they try to escape from Paris, but it doesn’t work out. So in the end they get caught. That’s something that I thought of when I knew that I was going to be making this story in France.”

“But I don’t speak French,” he admitted. “I felt that I was very much separated from the environment in which I was shooting — or rather, very much eager to focus more on the feelings and emotions of the characters in the story. It was a very unique experience. It could be considered either a weakness or a strength. But I felt I had the freedom to do what I wanted.”