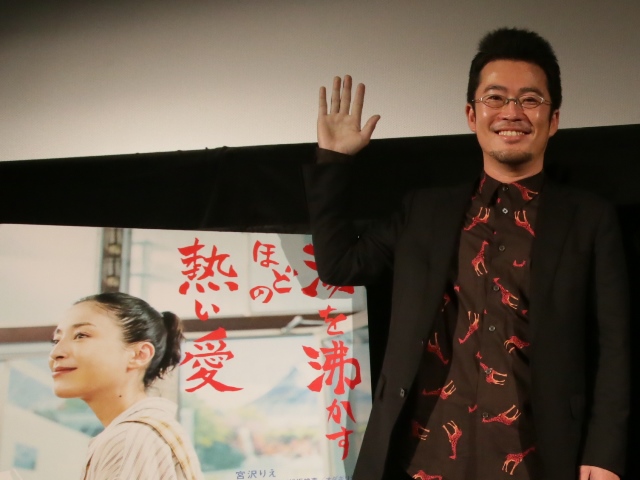 A worried mother rushes into a high school. Her daughter is waiting in the principal’s office, wearing a uniform splashed with paint, the inevitable proof of bullying. Restraining her emotions, the mother speaks to her daughter with a bright smile: “Which one is your favorite color?” she asks. The daughter says it is light blue; the mother likes nothing but red.

This explains kind of film that Ryota Nakano has made as the following to his acclaimed dramedy Capturing Dad four years ago. Her Love Boils Bathwater is an exhilaratingly humanistic and optimistic drama that celebrates the positive notes of our lives. Nakano’s commercial film debut, it is playing in the Japan Now section at 29th TIFF, proving that he is an up-and-coming Japanese auteur. As is often the case with the director, characters are allowed to perform as the driving force of the narrative, and in this film, Rie Miyazawa plays the indelible role of the mother who holds together the entire family. Writing the original script himself, Nakano’s trademark offbeat humor is present in abundance, but this time, so is a tender sentimentalism that will have audiences in tears, along with the laughter.

Futaba Sachino (Miyazawa) owns a bathhouse that has been closed since her husband evaporated like hot water. Since then, the confident and cheerful single mother has managed to sustain a fairly rosy life with daughter Azumi (Hana Sugisaki). But then one day, she is informed that she has only two months to live. Her terminal disease ignites in Futaba a vigorous kineticism, as she tracks down the missing husband, Kazuhiro Sachino (Joe Odagiri), empowers Azumi to defy the bullies, attempts to commune with a daughter-in-law, and above all, sets to work reopening the bathhouse.

Just as professionally as she boils the bathwater, Futaba directs her family’s life. Nakano adroitly but discreetly plays with color in the film, surrounding her family in the mother’s favorite red, and Azumi in light blue.

Although his latest feature can be categorized as an unconventional family drama, but Nakano’s family values lead him to depict family as a sort of community, like sharing bathwater with strangers. His message is that non-biological relationships can work as long as they are maintained by the right person and for the right reasons.

Nakano appeared at a Q&A session right after the film’s screening at TIFF on October 27, with Kohei Ando, the section’s programing adviser. Ando teased him that the title seemed “too direct and rather tacky” when he heard it for the first time, but that was fully converted after watching the ending of the film.

Responded Nakano: “In fact, my graduation film for the Japan Institute of the Moving Image had exactly the same ending. “This time I wanted to depict it much more convincingly, so that the level of the film would be better than my graduation work.” Ando was not alone when he expressed how impressed he was with Nakano’s script, which “planted many seeds that later affect the ending.” According to the filmmaker, “To reach that ending, I structured the drama very, very carefully.”

Although family is one of the big themes of the film, Ando felt that “In a way, this destroys family relationships” in a positive way, and “makes us rethink the non-biological family.” “These days, the idea of family as nuclear and blood-related has already collapsed,” claimed Nakano. “I think there is no answer to what family is. Each family has its own an answer. But if you allow me to roughly define what family is, I think that it is a dining table, a group of people who eat together under the same roof. That is why I always shoot scenes where characters are eating at the same table.”

One question from the audience concerned whether Nakano had any model for the character of Futaba. “People frequently ask me whether that is my own mother, but I don’t think she is the model,” he responded. However, his filmmaking method often incorporates his own life experience. “I’ve decided not to make films using artificial feelings,” he said. “I’d like to express what I feel and understand. I grew up with a single mother. Since my father passed away when I was six, my mother raised me alone. That’s my background. So whenever I explore others’ emotions, my film becomes like this. It’s not that I used my mother as a model, but that my own experiences and emotions created the film.”

“How about that completely useless father character?” he was asked. Nakano laughed and replied, “That’s me.”

Her Love Boils Bathwater will open in Japanese theaters on October 29.