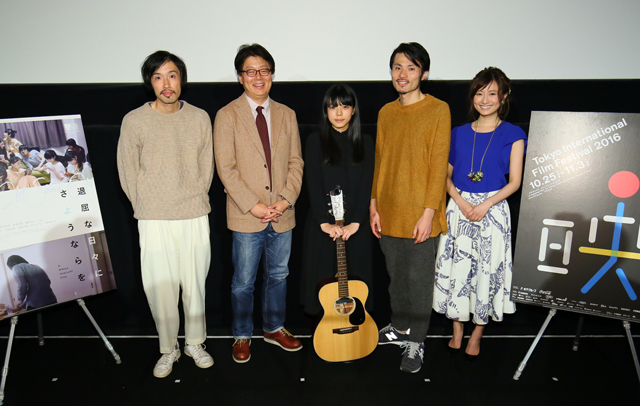 Singular filmmaker Rikiya Imaizumi returns for the third time to TIFF’s Japanese Cinema Splash section with his new film, Same Old, Same Old — but the title shouldn’t fool audiences. Although it has much in common with his earlier indie hits Sad Tea (13) and Their Distance (15), Imaizumi’s latest achieves new depths of insight into today’s youth and a new level of off-beat, almost Kaurismäkian, ensemble dramedy, propelled by plentiful narrative twists.

Right after the screening on November 1, Imaizumi ascended the stage for a Q&A session with producer Koji Ichihashi, actor Taro Uchibori and actress Marika Matsumoto. “People say performance changes every time in theater, but it happens in cinema as well,” said the filmmaker. “It’s the same movie, but it changes according to where you watch it and who you watch it with.”

The filmmaker continues to be cinematically obsessed with unanswerable questions concerning love and relationships among his contemporaries. Unlike Sad Tea, in which he addressed the sheer boredom of youth, his newest feature — whose Japanese title translates as Farewell to Boring Days — marks a further step toward the heart of the matter, including a deeper philosophical consideration of death.

In Same Old, Same Old, filmmaker Yuichi Kajiwara (Masaru Yahagi) sells out to direct a music video for the money (with the perk of the female singer being attractive). However, since the job was offered by a mysterious guy in a house where dozens of girls are living together for unexplained reasons, Kajiwara soon finds himself involved in over his head. Meanwhile, another narrative proceeds in Fukushima: closing down the family business, Taro Imaizumi (Uchibori) suddenly hears from the girlfriend of his missing brother Jiro. The film’s third strand takes place in Tokyo, where Aoba Harada (Matsumoto) tries to understand the suicide of her filmmaker boyfriend as she goes through the process of burying him.

It’s no leap to make connections between Imaizumi and his filmmaker protagonists, especially as one of the characters shares his family name. Setting the stories in Tokyo and Imaizumi’s hometown of Fukushima also deepens the inferences, and the dilemma of how film can sustain its integrity lingers over many scenes. The director’s trademark long shots and non-emotive acting may encourage spectator detachment from the screen, but underscore the director’s own questions about how it is possible to handle the lives and deaths of loved ones.

The first question from the audience was, “Why death?” Responded Imaizumi: “I’ve tended to avoid directly depicting death in film. But I’ve gotten older and lost someone I knew, my friend from college. These things have built up inside me.”

However, the notion of death that Imaizumi proposes in the film is rather radical: you never die unless you are informed of it. This approach seemed difficult for his actors to grasp. “I didn’t get it at all,” confessed Matsumoto. In terms of why Aoba visited the hometown of her deceased boyfriend, Matsumoto noted, “She says ‘I don’t know.’ Perhaps through communicating with the family and friends of her boyfriend, she understood that she doesn’t understand.” “I guess not understanding death is natural,” offered Imaizumi, “Still, perhaps she had to visit the hometown for some reason.”

Another question concerned Aoba’s boyfriend, and why he left a video message before his suicide, that reveals his true identity. Uchibori feels, “It’s really unfair. He might have left it for the sake of Aoba, but it just makes Aoba think ‘why?’” Interjected Imaizumi, with a laugh, “Perhaps it’s about egoism and narcissism, like the filmmakers in the film.”

Providing ambiguous answers about their characters and their interactions with the director was striking, since it soon seemed as if the actors were still developing their characters, and the audience was witness to the unusual process. Although Matsumoto and Uchibori used first-person pronouns, their ‘I’s seemed to represent not only themselves, but also the characters they played.

Same Old, Same Old is not the same old picture by Imaizumi, but a deeper exploration in to the ongoing conundrum about why and how one dies. In the end, as the director concludes, we can only understand that we cannot understand.

Suddenly, a surprise guest came up on stage: Ayano Kaneko, who wrote the film’s theme song in 2012. “The director was really fond of the album that has this song on it,” said the singer, “although the CD is not even on sale anymore. I haven’t even sung it at concerts these days. I’m glad that the song has been reborn.” Accompanied solely by acoustic guitar, Kaneko’s live performance in the auditorium was even more melancholy than the film’s overall sentiment.

Imaizumi was prompted to say: “Today is the anniversary of my grandmother’s death. I feel many things overlap each other. I thought this song was about being heartbroken, but it is actually about the Fukushima earthquake.” The filmmaker seemed to have difficulty finding appropriate words, and close to tears, said, “In that sense, it’s possible to interpret it other ways, and there are many layers that link it to the film.”

After the performance, producer Koji Ichihashi reminded everyone that Same Old, Same Old will open on November 19 in Tokyo, with the possibility of further openings elsewhere.