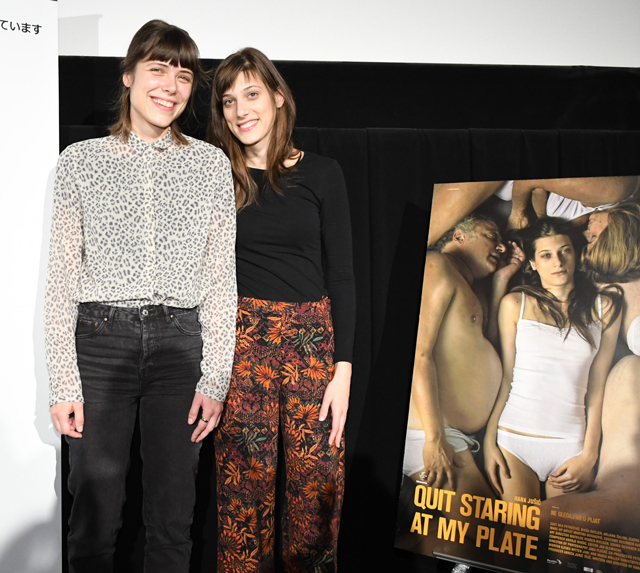 Hana Jušić’s debut feature, Quit Staring at My Plate, depicts the life of a hard-working young woman, Marijana, played by Mia Petričević with an unsentimental realism. Marijana struggles with family problems, her coworkers and the seemingly insurmountable burden of unfulfilled dreams and desires, living in a small town on the Dalmatian coast of Croatia.

Jušić and her lead actress discussed the film after its screening in TIFF’s main Competition.

When queried about why she decided to make a film on this theme, Jušić replied, “I wanted to do it for a very long time and as it always is with first features, you cram into it everything you ever wanted to film. And I wanted to do a film in the town I was born in, which is the town from the film — and about the mentality of the people in the town. I wanted to tell the story of a character, who is very unlikable and closed, but at the same time has some charisma and strength that make her interesting. So I combined these two and I made the film.”

She also spoke of how she cast Petričević, an unusual story.

“I had a very specific notion of how Marijana should look and the way she would move” explained the director.” I was browsing through all the actresses from Croatia and Serbia and Bosnia and I couldn’t find one who would have the right energy. And then I went for a vacation and I saw Mia at the beach. I’d never met her before. I saw this girl and I said OK, this is Marijana. She was packing up her tent and I was like, OK, now is the moment, because I will never see her again. So I just got up the courage and asked her if she would like to come to the casting. She was a bit confused, because… What is this? Is this the casting for a porn film? But in the end she came to Zagreb and it turns out she was not a professional actress.”

In fact, Petričević is an architect in real life. When asked about how her work may have informed her acting, she replied, “In my profession I have my way of expressing myself in my creations, but I never expressed my feelings by acting. But maybe this is something that I had deep inside me.”

In the film, Marijana works as a medical technician. Speaking about why she chose this occupation for her main character, Jušić said, “It’s because her social class wouldn’t let her go to university, but I still wanted to give her a profession that is very neat and picky and you have many details that you have to think about. This is somehow in contrast with her home, where everything is very dirty and chaotic. She’s smart. She went to school to be a technician in a medical lab. She finished school and she’s doing a job that is not that easy. So I wanted to show that she has brains and she has ambition, but also that she doesn’t do something that is connected with people. She can be detached from people in her job.”

When asked if the character was inspired by her own experience, the director responded, “Actually it wasn’t based on my particular experience. Maybe the character of Marijana herself I stole from movies and books that I liked. For instance, very inspiring for me, when I was a teenager, were films like Boys Don’t Cry and Million Dollar Baby, both with Hilary Swank. And I wanted to make a character like that. But in terms of the rest of her world, in terms of her family, yes, these were like the people that I grew up with — the people that surrounded me, their problems and their way of humor and their way of arguing and their way of loving each other. This kind of family setup, the neighborhood setup is very, very known to me.”

When asked about the town and the locations Jušić used, she told the audience, “It’s a town called Šibenik, on the shore, on the coast of Dalmatia. And I really wanted to show it because it’s a tourist town, more or less. People see one face. They see the Renaissance Center, which is very beautiful and very clean and neat and picturesque. I wanted to show the back alleys of such a town — the places that are never shown to tourists. I wanted to show it in a light that wouldn’t be picture-postcard pretty, but maybe a bit ugly, in a way. But I find beauty in this ugliness.”

When asked if she considered any other ending for the film, Jušić responded, “I started the film with the last scene. When I was thinking about the film I knew that I wanted to have her with her family in the end at this spa.

“I never thought I would give Marijana a chance to run away,” she added with a small laugh. “I was sure she would end up with them, because I wanted to subvert this myth that we see in Hollywood films when people can always run away from their lives and they can be free and they can build another life for themselves. I don’t think we can often do that. I think, sometimes, what is the great unknown scares you more than the bad things around you that you know. I also think that Marijana realizes that she’s actually one of them. In the end she decides that this will be her life… she didn’t go to Zagreb and become a cool urban girl away from her family.”