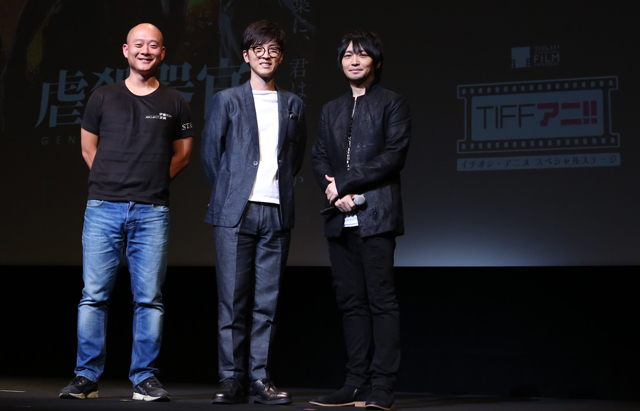 A packed and mostly female crowd gathered at the Tokyo International Forum on October 31 for the first TIFF ANI!! event. The two-part event was hosted by Shinsuke Kasai (of the morning variety show “Tokudane!”) and featured sneak peaks and guest appearances for several new anime films premiering this winter, as well as a talk show with music performances by several well-known anime voice actors.

The first film previewed, Pop In Q, is a shojo/idol/coming-of-age adventure yarn scheduled for a wide release on December 23. Guests were treated to the colorful opening six minutes of the film, which introduced the five female protagonists who are transported to an alternate fantasy reality on the eve of their graduation from junior high school.

Atsumi Tanezaki, who plays one of the girls, named Konatsu in the film, and director Naoki Miyahara were on hand to promote the work. “I truly believe that 60 years’ worth of thought and care went into this film,” said Tanezaki, referring to the film’s production to commemorate the 60th anniversary of Toei Animation Studios.

Tanezaki pointed out that the dance scenes were especially noteworthy, considering Miyahara’s background as a veteran animator and CGI director for Toei’s magical girl anime Pretty Cure and its elaborately choreographed dance sequences. When asked by Kasai if his own memories of junior high figured into the film, Miyahara replied that he didn’t remember much about his youth. “I was inspired more by my daughters, who are right around the same age as the characters,” he replied.

The second film previewed, the fantasy-adventure Chain Chronicle: The Light of Haecceitas Episode 1, is based on one of the best-selling smartphone role-playing game and is receiving a limited theatrical run, with one “episode” screening every month in Japan, starting on December 3. The entire first episode, with its action-packed opening battle sequence, was previewed for the audience. “I played the game a lot,” said director Masashi Kudo, “so I wanted to make sure the film had all the key moments I reacted to emotionally in the game.”

Voice actors Akira Ishida and Daiki Yamashita, who play Yuuri and Aram in the film, were also on hand. Ishida voiced over 40 characters in the smartphone game and said he “looked forward to a reduced workload” in the anime. When asked if there was a character he really wanted to play in the anime, however, he answered, much to the shock of Yamashita, “Probably Aram.”

The final preview of the night was its most anticipated: Geno Studio’s big-budget adaptation of Project Itoh’s 2007 SF/political thriller novel, “Genocidal Organ.” The audience was shown the film’s kinetic opening, which mirrors the book’s — the assassination of a terrorist leader by technologically-advanced US special forces.

The project was intended for release last year, but was delayed when the production studio, Manglobe, declared bankruptcy. “It was a shock to us all,” said voice actor Yuichi Nakamura, who plays intelligence agent Clavis Shepherd in the film. “I was scheduled for an interview about it the very day after the studio went under. I called my manager and asked him if the interview was still on, and he told me, ‘Of course.’ He had no clue. I said, ‘You’d better check Yahoo News.’”

Producer Koji Yamamoto established Geno Studio in order to complete the long-awaited film. “I feel like I have the weight of the production on my shoulders,” said Yamamoto, before revealing the back of his t-shirt, with the words “Genocidal Organ,” to raucous laughter and applause.

Voice actor Takahiro Sakurai, who plays terrorist John Paul, said his deep and scary character was challenging. “The violence sucks you in,” he said, “but this complex world created by Itoh is what really makes you think.”

Yamamoto said that director Shukou Murase could not attend the sneak because he was still hard at work for the film’s February release. The staff was working hard, pushing the limits of their own health. “I don’t really remember, but at some point during the course of the production,” the bald producer joked, “I lost all my hair.”

The buzz of the upcoming films gave way to intimate conversation in the night’s second half, “Nojiken Bar.” Sponsored by women’s music magazine LisOeuf, and hosted by voice actor and singer Kenji Nojima (Time of Eve, Psycho-Pass), the evening featured a bar setup on stage, complete with bottles of alcohol, bar stools, and a grand piano. Nojima welcomed several voice acting talents to the stage, serving up whiskey neat while goading his customers into revealing industry talk and “spontaneous” karaoke performances.

Many of the guests regaled the audience with hardscrabble memories of when they first broke into the industry. Kazuki Kato (Reborn!) completely overslept his first audition and ended up hitchhiking to Hokkaido before realizing he needed to take his work seriously. Sho Hayami (BLEACH) entered a voice acting competition for the prize money. “I ended up blowing it all on a bender with a friend in a single night,” he laughed. Naozumi Takahashi (Prince of Tennis) worked part-time at a rat-infested Kanda sushi shop. While sleeping uncomfortably on a folded futon, he “could near the rats nibbling on my melon pan (bread) in the middle of the night.” Kensho Ono (Kuroko’s Basketball), meanwhile, was so desperate to show his hard work ethnic that he ended up spitting blood all over his script when he went to a recording shortly after a root canal.

The actors also spent time talking about how they connect with audiences. When asked what he thought was the difference between working in live-action films and voice acting, Kato replied, “Voice acting means that I have to create the entire world with my voice. It’s a lot of responsibility, and I have to put a lot of different things into the performance.” Hayami echoed this with his own story of voice acting in the 1980s. “Back then, we didn’t always have animatics to match our voices to. Sometimes, we didn’t even have the storyboards. There was just a red light that would flash and we would have to voice the character from the script, but also our imaginations.”

Takahashi, however, said that while the entry points are different for various roles, the goal of communicating your feelings to the audience remains the same. “I’m always conscious of a theme for whatever role I’m doing,” he said, “and within that theme, I improvise. But I never forget the theme.”

The audience squealed in delight when musical performances by Kato and Takahashi provided pop interludes to the lively conversation. The night was punctuated by Nojima’s own sequence of dialogue and songs, most of which was from his latest album, Between the Lines, before the guests all came out one last time to fare the giddy audience adieu.