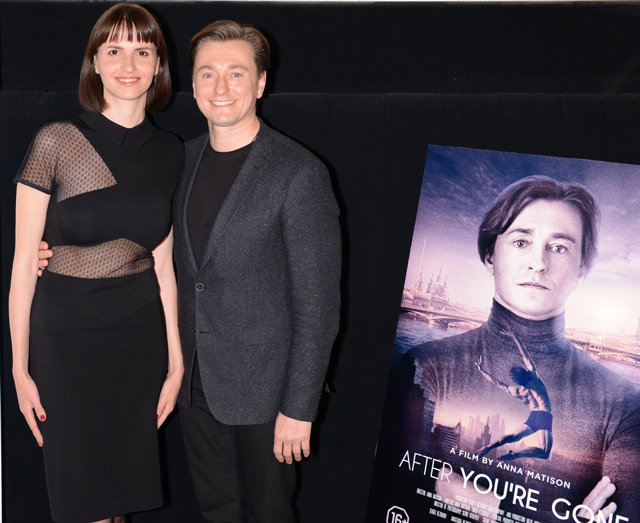 Director Anna Matison and her husband and producer, Sergey Bezrukov, came to Tokyo to present the international premiere of their new film, After You’re Gone, playing in TIFF’s Competition section. Bezrukov also stars in the film.

After You’re Gone follows the life of Aleksey Temnikov (Bezrukov), enfant terrible superstar of the Russian ballet scene. We meet him, in his 40s, years after his moment in the spotlight, now working in a small town. He still carries on with his wickedly honest, but not very socially acceptable, ways. However, he comes to a turning point in his life when his past meets up with his present. He’s faced with a reckoning with his life, desires and legacy.

The film digs deep into the behind-the-scenes world of ballet. At a press conference on November 2, Matison was asked about her relation with that world. “I used to work with the art director of the Mariinsky Theatre,” she said of the renowned St. Petersburg ballet and opera house, “so I know the reality of the world of ballet. I wanted to depict the world of a ballet dancer and also choreography.”

Speaking of the very short careers of most dancers, she said, “Most ballet dancers, after they pass the age of 30, they usually retire and live off their pensions. In this film, as well, you can see that after a 20-year period, [Aleksey] comes back as a choreographer. And in the world of ballet, after the year of 30, if you want to continue, choreography is the only option that you have left. So he had a 20-year interval and comes back as a choreographer.”

Bezrukov jokingly spoke of one of the difficulties of playing the role of Aleksey: “Of course it was very difficult to play. You have to have very good posture,” he said, referring to the fact of Aleksey has perfect posture throughout the film. “That was very difficult for me until the end. As I’m sitting here, you can see that I’m sort of slouching. And of course, I am not a ballet dancer. I’m a theatrical actor.”

He added, “For those of you here, I would like to recommend that you keep your backs straight. Don’t slouch.”

On a more serious level, he talked of playing the role of a difficult and testy character: “I played this guy that’s not liked very well in terms of his personality. He’s dangerous. He harms a lot of people with his words. And in the beginning, I’m sure that many of you hated me as a character. But that was what I was expecting. However, the director also wrote the screenplay, and thanks to her, eventually you start to understand him, I think.

“I [just] had a very interesting thought,” he added. “You know, you see porcupines, right? Porcupines have a lot of needles sticking out. And this character does too. But his needles are not sticking out, they are inward. What I mean was not only physically, but psychologically, it was very painful for him. In his life he was not able to fulfill what he wanted to achieve.”

He continued, putting the role into a larger context, saying, “Maybe most Russians are very satisfied to have a normal marriage, a normal family. For people that are involved with art, they think more seriously about life. For the character in this film, his priority was ballet, which is an art form. So, he’s not thinking of having children, having a family or building a house. He could care less about that. But he’s a genius. And he was thinking about what he could leave after he was gone. He says at one point that he could commit hara kiri in the name of art.”

Matison was quick to add, “What I would like to say is that [Sergey’s] real personality is nowhere near the character’s. He is a very famous actor in Russia. And when he plays a role he becomes that character. And from that moment he was not Sergey, but Aleksey. He had become him totally.”

She added, “And so if he was to be empathetic, I think it was the director who had to empathize with him.”

She reflected on the nature of genius and how it’s exemplified in the character of Aleksey: “There are the words that Pushkin said about geniuses and villains not competing against each other. If we were to evaluate a genius, I think we compare them with a normal person and how different they are. When you try to understand the character, you have to think of him from a different aspect.“

A thrilling ballet sequence concludes the film. Matison explained how she was able to shoot it in the historic theater: “I had a relationship with the Mariinsky Theatre through music. I made seven films with them. In this film, this is a real ballet performance that you see. That was really important for me. The people of Mariinsky were very cooperative. They created this ballet performance especially for this film. It’s all real.”