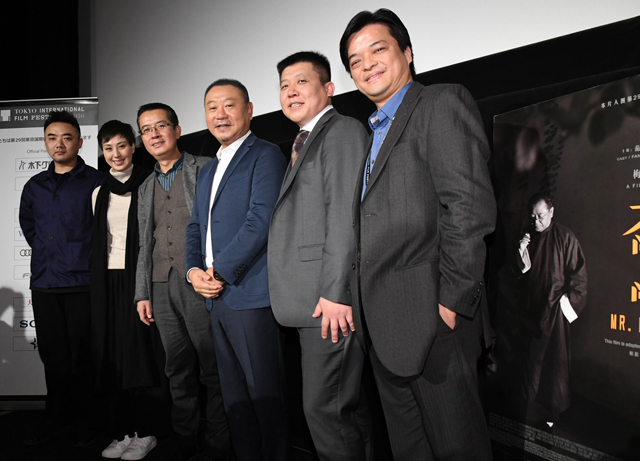 The title character of Mei Feng’s debut as a director, Mr. No Problem, is a man that everyone has known at some point in their lives. Director Ding (Fan Wei), as he’s called, manages a large farm in Chongqing that has a number of well-off shareholders. The farm is said to be productive but always seems to be losing money, and under Ding its fortunes haven’t improved. But he’s such an agreeable fellow that even when his employers castigate him for not being as strict with the workers as he should be, their tone is understanding. The workers like Ding because he lets them sleep late and play mahjong in the farm’s business office.

During the press conference for the film, which is in TIFF’s Competition section, Mei said, “It’s only natural that the viewer sees Ding in his or her own way. Only you can decide what kind of person he is, but I’m sure there are people like Ding in Japan, as well.”

Matters are complicated somewhat with the arrival of Qin (Zhang Chao), an irresponsible con man who passes himself off as a worldly artist and cadges a room from Ding, promising that his rich father will send rent money, which, of course, never comes. Qin takes advantage of Ding’s agreeable personality to the point where the manager finally loses his job, and is replaced by the Western-schooled, authoritarian factotum You (Wang Hanbang), who quickly alienates the workers and pushes Qin to plot a rebellion.

Though Lao She’s theme of the flawed but agreeable company man is universal, his telling of that tale is specifically Chinese in that one is judged based on one’s standing in relationships. By all appearances, Ding is incompetent and easy to fool, but he understands his place in the scheme of things only too well and carefully smoothens communications between different parties, even if it’s only on the surface.

The subtle humor and social dynamics that make the movie enjoyable are also a function of the film’s setting and timeframe. It is 1943, when Japan and China were at war, and Chongqing at the time was the provisional capital of Nationalist China after had Chiang Kai-shek moved if from Nanking. But while the conflict is mentioned in the story, it feels distant.

“As depicted on the screen, the farm is supposed to look like a paradise far away from the strife of war,” explained Mei. The rich women whose families have stakes in the enterprise visit it dressed in the latest European fashions, telling tales of the good life in places like Hong Kong. Qin takes advantage of their vanity to get what he wants, and in turn Ding is even more dazzled by the con man’s subterfuge.

Mei, who studied Chinese literature as an undergraduate and film in Paris, is one of China’s most successful screenwriters. He teaches at the Beijing Film Academy, and made Mr. No Problem to commemorate Lao She, the author of the work on which the film is based, on the 50th anniversary of the popular novelist’s death. “The academy has its own production organization,” said the director. “The purpose of making films is to utilize new talent, so directors and students get together to develop projects, and this was one of them. We thought the timing was right to celebrate Lao She.”

Most of the actors are veterans, however. Fan Wei, the actor who played Ding, said that he had to constantly remind himself that his character was from a different era when one reporter asked if there were any challenges involved with playing this particular role. “Director Ding is very much a man of his time, and the challenge for me was making him relevant to audiences today — and to make him familiar, as well, like someone you would know now.”

Shi Yihong, the actor who played the somewhat imperious Madame Shen, “third wife” of one of the farm’s main shareholders, is a noted Beijing Opera performer. In one scene she entertains her husband with a little song and dance that seems especially accomplished, even for a woman of Madame Shen’s breeding and education. “I’m used to wearing traditional Chinese clothing,” Shi said. “And the actors I studied under were alive during the period depicted in the film, so they knew these kinds of people firsthand. My character was not in the original story, so I had to develop Madame Shen for the movie. My background made that easier to do.”

Nevertheless, Mei insisted that the script was “quite loyal to the novel,” which originally appeared as a newspaper serial and isn’t as famous as Lao’s other works. One reporter praised the silvery black-and-white cinematography and slow, deliberate tempo, both of which combine to convey the period detail to excellent effect. As Mei pointed out, the movie is meant to be a snapshot of the past that offers a peek at the modern world to come.