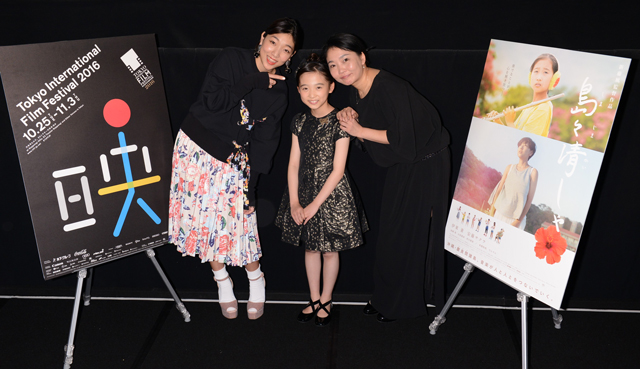 Kaze Shindo has returned to filmmaking after a too-lengthy absence with her Japanese Cinema Splash title Sound of Waves. The young filmmaker, who marked her debut in 2000 with the acclaimed Love/Juice, made just one more feature before putting her own career on hold to assist and then care for her grandfather, legendary screenwriter-director Kaneto Shindo (Children of Hiroshima, The Naked Island, Onibaba, Kuroneko).

Appearing at a Q&A session after the screening with her new film’s stars, newcomer Aoi Ito and indie queen Sakura Ando, Shindo spoke about the “family matters” that had preoccupied her for the past decade, and said, with evident emotion, “I’m so honored to be able to present my film at TIFF for the first time.”

Sound of Waves is an Okinawa-set tale about the interaction between an overly sensitive child and an unhappy violinist from the big city. On a small island with breathtaking views of the Pacific, lives Umi (Ito), a little girl who’s cared for by her grandfather. Umi’s hearing ability is so sensitive that anything too loud or out-of-tune can make her panic. Although her charming yellow earmuffs protect her from many disquieting noises, Umi’s uncontrollable nature has caused a number of problems with classmates. Her stressful life reaches a turning point when Yuko (Ando), a violinist from Tokyo, arrives in town to perform in a concert. Gradually, the two help heal each other — against a soundtrack of island melodies.

One of the film’s exhilarating Okinawan songs proclaims, “Our islands are beautiful, and our lives here are also beautiful.” Shindo proves the lyrics to be true. Rather than exposing raw emotions, as she did with her characters in Love/Juice, she adopts a humanistic approach in her presentation of the island’s living things, both humans and nature. Written by Kenichiro Isoda, Sound of Waves presents an optimism about relationships that will resonate with all audiences.

Proving she is Kaneto Shindo’s granddaughter, however, the director doesn’t ignore political issues. One of Umi’s most hated dissonances is the US military’s noisy aircraft, which frequently zoom past overhead and remind everyone of the ongoing troubles in Japan’s southernmost prefecture.

Shindo told the Q&A attendees that she chose this story as her first project in 10 years because of her memories with her grandfather: “He was the kind of man who wanted to make the most of his life until the very end. So, I lived with him and supported his filmmaking activities. Those days are really important to me and such a treasure, but I strongly felt I was running away from my own life. When my grandfather passed away and I was really empty, I found this script.” The encounter was really fortunate because, “I could discover this film exactly when I wanted to live my life again.”

Coincidently, Sakura Ando was also taking a break from acting, and reassessing her career: “Before getting interested in my character, I was just attracted to spending time on this island with children, a grandfather character and music,” she said. Although Ando has won worldwide acclaim and many awards for her work — including a Japan Academy Prize for her starring role as a woman who transforms her life through boxing in 100 Yen Love, winner of the 2014 TIFF Japanese Cinema Splash award — at the time, she “wasn’t sure about my future. I sometimes felt perhaps I wasn’t going to act again.”

Although her character is a professional violinist, Ando revealed that she had no experience of playing the instrument, “I listened to various violin music, and it helped my own rehabilitation as well,” laughed Ando. “Many violinists started practicing in childhood, so that was really different from boxing. I felt the importance of being practical.”

Recalling the audition, young newcomer Ito said she was “very nervous” about getting the role. Shindo enthused, “Once she started acting in a scene, this stone-faced, nervous kid suddenly became very lively. I could witness the transformation and see her abundant emotions, and I thought, ‘She’s the one.’”

In response to an admiring comment from the auditorium about winning the Japan Academy Prize, Ando replied, “I myself haven’t changed at all.” But Ando noted that she had gone to pray at a shrine for the first time in her life; before then, she had only sent her gratitude. “I sometimes feel I cannot act anymore; acting and films seem so far away. But I prayed to be able to sustain my body and [to continue rejoicing] about these experiences.”

Noting a scene in which Umi plays the flute on the seaside, following her grandfather’s death, Shindo confessed, “Emotionally speaking, I propelled the narrative toward that scene,” making the resonances with her own memories quite clear.

“For the past 10 years, my grandfather always told me, ‘You don’t need to get married or have children. Be a fine filmmaker,’” she recalled. “But I’ve never given up on them. I want to be happy to be a good director. I’m still single and haven’t fully grasped what filmmaking is, but I hope this film will encourage me to restart my life.”

Sound of Waves hits theaters across Japan on January 21, 2017.