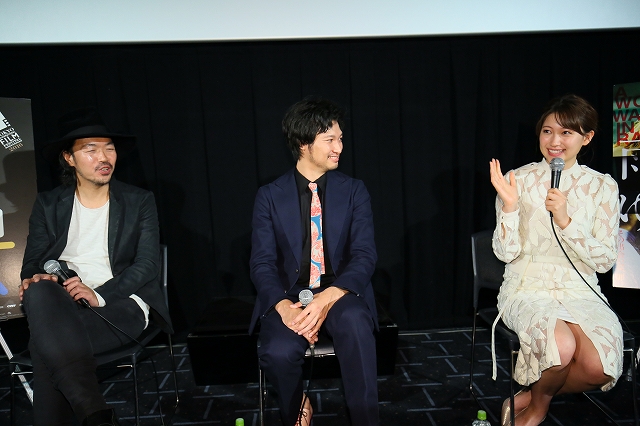 It seems appropriate that it was an inclement day in Tokyo when Yoshihiro Hanno’s directorial debut, A WOMAN WAVERING IN THE RAIN, had its world premiere in TIFF’s Asian Future section. The film follows the unlikely relationship of the taciturn Kenji (Munetaka Aoki) and the enigmatic Satomi (Ito Ohno), both with dark secrets in their pasts that will eventually come full circle. Shot in noirish interiors and rain-drenched cityscapes, the film is moody and mysterious.

Hanno and his lead actors were on hand to talk about the film at a press conference following the screening on October 28.

Though he is new to directing, Hanno is no stranger to the filmmaking process. He’s a well-known composer, having written scores for films by the likes of Hou Hsaio-Hsien and Jia Zhangke.

“I started composing music for films about 15 or 20 years ago,” Hanno said, “but when I told people that I actually wanted to direct, they sort of laughed. Not that they laughed at me, but they said that composing music and directing films are completely different. And people thought that I wasn’t going to be able to do it.”

But Hanno was confident he could pull it off. “Film and music are to me almost the same,” he explained. “In music, you have a certain time, but it ‘s a performance art. Film is something you see visually. It’s art as well. For an orchestra, you compose up to 60 or 90 minutes, and I feel that’s very similar to ‘composing’ film. I was writing the screenplay as if I were writing orchestral music. And directing was like conducting.”

Music is a strong metaphor for Hanno’s approach. It informs the entire feeling of A Woman Wavering in the Rain – as well as his approach to directing actors.

Aoki, whose character is tormented by something that we don’t learn until late in the film, said, “The director was very good at depicting the characters’ psychological frame of mind. Maybe that has to do with his background in music.”

He added, “While acting the part and speaking the dialogue, I started to think about how his [Kenji’s] voice would come out. Maybe it was because I was working with this director who had a musical background. But it was really a great experience for me because it really made me think about the tone of my voice.”

Ohno related her own experience: “The director gave me a lot of advice about how I should talk. I’m not from the music world, so it was difficult for me to completely understand. But thinking back, it was good that I was able to learn something new.”

Working with actors was also a new experience for Hanno, but with Aoki, he had the good fortune of collaborating with an actor who threw himself wholeheartedly into his role.

“We had discussed his character many times before we started shooting. And he was already Kenji when he came onto set. And you could see, as the days went by, that Kenji sort of took over Mr. Aoki himself. He wasn’t Mr. Aoki. He was Kenji. And I would say, ‘Hey, the camera’s going to go this way, so you should walk around the table.’ But Mr. Aoki would say, ‘No, Kenji doesn’t like to go to the left.’ Kenji had taken him over. And when you looked at his eyes, it was like it was Kenji’s eyes and not the actor’s. And I thought, if Kenji says so, I guess I’ll have to listen to him.”

Hanno added that Ohno went through an emotional experience portraying the character Satomi, who reveals a hidden side – another identity – midway through the film. This brought out not only a new side to the character, but also something within Ohno herself.

Hanno explained, “As Satomi, I wanted to show one side of her, and when she [reveals her secret], I wanted to have a distinct difference. I told her, ‘If it doesn’t come across to Kenji, if you’re not strong enough, the whole ending of the film is going to change.’” To steel herself for the revelation, and the changed circumstances of the relationship, Ohno purposely spent little time with her costar during filming.

When queried about the title of the film and it’s meaning, Hanno paused for a second and said, “I thought, what is something that everybody encounters? And I thought, rain. No matter where you are, everybody experiences rain, whether you’re rich or poor, tall or short. I was just trying to come up with a title about a thing that people cannot avoid.”

He turned to Ohno and asked, “What do you think?”

“I was told there was a different title before this,” she replied. “He [Hanno] talked about rain and said he liked rain. So he wanted to use rain in the title. I think that the character, Kenji, is like rain and that Kenji’s emotions are always wavering. We also meet each other during a rainstorm, so it is a very important feature in the film.”