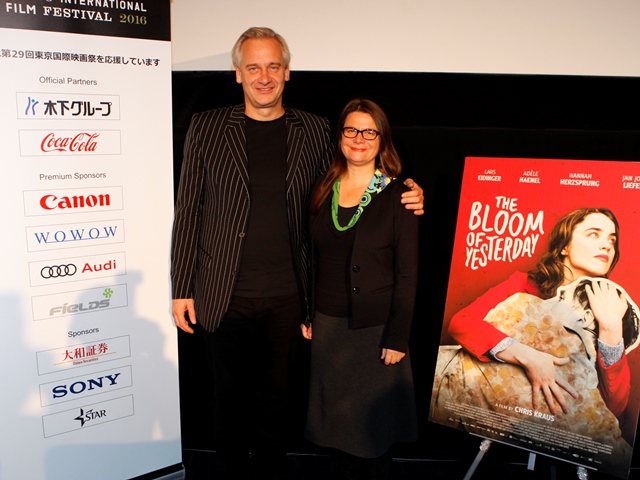 In the new German film, The Bloom of Yesterday, screening in TIFF’s main Competition, two youngish people, a German man named Totila (Lars Eidinger) and a Frenchwoman named Zazie (Adèle Haenel), meet over shared interests and after some heated arguments related to those interests fall in love. It’s the classic formula of a romantic comedy, except with one big difference: The shared interest in this case is the Holocaust.

Totila works for a foundation doing research into the concentration camps where millions of people, mostly Jewish, were exterminated by the Nazis during World War II. Zazie, who is Jewish herself, is also a researcher who used to work with the late head of the foundation. When she comes to Germany to help out, she is stuck with Totila, who is going through a bad patch in his marriage and possesses a combative personality. In the first scene, he and a colleague have a disagreement over tactics and Totila beats him so badly he has to be hospitalized.

Did we mention this is a comedy?

When asked, during the press conference following the October 28 screening, whether or not the cast and crew were comfortable making light of one of history’s most horrendous chapters, the film’s writer-director Chris Kraus, said, “Everybody had read the script beforehand, and I took a lot of time explaining it to everyone. While we were shooting, we all knew that behind these jokes there was a darkness and that we weren’t trying to make it seem less terrible than what it was. We were handling the pain, but handling it with a touch of comedy.”

As several journalists noted, the humor is quite dark. At one point, Zazie, who has a temper of her own and may suffer from bipolar syndrome, gets mad at Totila while they’re driving along the highway and tosses his pug, Gandhi, out the window. In another scene, they both try to deflate the attraction growing between them by lying that they each have AIDS.

“There are a lot of films about the Holocaust,” said the film’s producer, Kathrin Lemme, “but there aren’t that many about the way our generation is dealing with it. That’s what’s really different about this movie. Almost all the people who lived through the Holocaust are dead now, and it has become easier to talk about what happened to certain families, and what kind of involvement our grandfathers had.”

In Totila’s case, this heritage is especially fraught because his grandfather was an unrepentant Nazi until his death. Totila is involved in Holocaust remembrance activities to alleviate his feelings of guilt, which Zazie, initially at least, doesn’t buy.

Lemme went on to say that the tricky theme actually made it relatively easy to find financial backers. “I didn’t have to spend a lot of time convincing them,” she said. “Either they liked the idea right away and wanted to be involved, or they disliked it completely and rejected any involvement.”

Apparently, much of the background material for the film was based on firsthand experience. The director himself carried out Holocaust research some years ago and understands how these foundations work and the politics involved. The Bloom of Yesterday is his first feature in 10 years (the previous one, Four Minutes, screened at TIFF in 2006), but he had started writing the script five years ago. One reporter commented that would mean Kraus wrote the script before the current wave of Middle Eastern refugees became an issue in his country.

Kraus responded that he thinks it’s a perfectly legitimate comparison, since the refugee problem has mobilized German’s right wing and brought them out into the light of day again. “This is directly related to Holocaust remembrance,” he said. “People have to understand that the Nazis didn’t come from outer space. They were Germans, the product of our culture. We talk about the Holocaust over and over again, but it means nothing if we never connect it to ourselves.” The movie has yet to be released in Germany, and Kraus imagines “that the right wing won’t like it at all.”

A Chinese reporter remarked that while he couldn’t always understand the European references in the film, he felt its theme of remembrance and accountability was relevant in Asia as well, though he didn’t elaborate. A Japanese reporter followed up that remark by saying that Germany seems to produce a lot of such films but in Japan “we tend to sweep the unpleasant aspects of history under the rug.”

“That’s why I made this film,” Kraus said. “The other Holocaust films made in Germany make it seem as if it was brought about by other people. That’s not true. This a new film for a new German audience.”