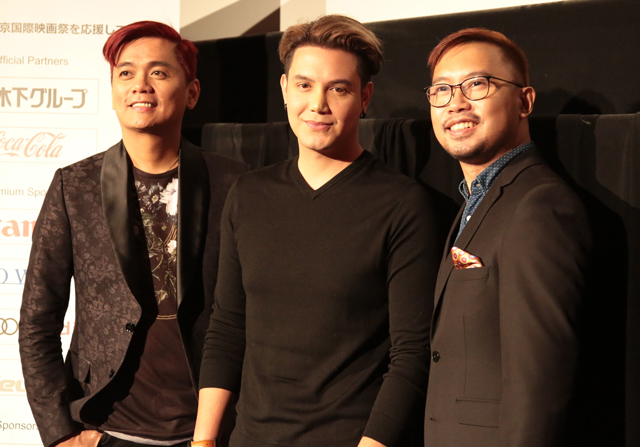 Jun Robles Lana is one of the most accomplished filmmakers working in the Philippines today, touring the festival circuit with touching pictures like Bwakaw, which appeared at TIFF in 2012. His 2013 film Barber’s Tales won TIFF’s Best Actress Award. Lana is now back in the Competition section with his latest film, Die Beautiful. The director frequently injects joyful charm into his films through the presence of a powerfully captivating leading role, and his latest is the best example so far. Starring exquisite newcomer Paolo Ballesteros, who mainly works as a TV show host, impersonator and makeup artist, this poignant tale presents the life and death of a transgender beauty queen in a positive way that celebrates living the life that one dreams of living.

However, this celebration of life starts from the end of it. Trisha (Ballesteros) unexpectedly dies when she has finally won a beauty pageant. During the funeral, her friends fulfill Trisha’s last wish, decorating her body to create the most beautiful carcass every night, one that looks exactly like such celebrities as Angelina Jolie and Lady Gaga. As her friends and family mourn her sudden death, the film constantly inserts long flashbacks to inform us how extraordinary Trisha’s life was and what she had sacrificed to make it happen.
#
Interestingly, Lana does not permit the flashback narrative to follow chronological order; at the beginning, spectators are not sure of the entire picture of Trisha’s life just from small sequences in a particular period. The narrative structure is almost like Trisha’s stream of consciousness, as if she is recalling her own past before her soul leaves her body for the other side. By the time it becomes possible to put together the right pieces of this life-size puzzle, Trisha’s life sparkles as colorfully as the film’s mise-en-scene: a comical relationship with a punk, the tragic experience of trauma, a sad romance. With a dynamite performance by Ballesteros, Die Beautiful weaves all of these into a touching, beautiful finale in which Lana seeks something true and wonderful even in artificial speeches in beauty contests.

On October 27, Lana, Ballesteros and executive producer Perci Intalan attended a press conference after the TIFF screening. Ballesteros, who was magnificently dressed as Angelina Jolie on the red carpet, revealed that it was his first-time experience on a red carpet: “I was thrilled and excited, but deep inside, it was painful,” the lead actor laughed. “Because I had to strap everything, make everything sexy and had to wear these heels. But all in all, it was very exciting.”

Filmmaker Lana, who thought of the original idea, revealed to the press that he conceived the initial idea around 2014. “At that time, a Filipino transgender woman, Jennifer Laude, was murdered in my country,” said Lana, who was flabbergasted by “the reaction of some people, especially on social media, when they said that she deserved to be murdered because she was a transgender and she was a freak. And I felt it was time to make a film about her, a film inspired by that.” As a producer, Intalan knew that the production would be “challenging, but it’s very important to tell the story.”

The first question came after the journalist admitted the film had brought tears to her eyes repeatedly, “although I’m not really a crybaby.” Apologetically, she couldn’t resist asking the sexuality of Ballesteros. “Well, I’m straight,” said the actor, which surprised some in attendance. Following his star’s comment, the director mentioned, “All the other actors who portrayed friends of Trisha in the film, they are all straight.” The reason Ballesteros got the role was his spectacular talent, which he had just proved on the screen. According to Lana, “I did not get Paolo because he’s known for his make-up transformations. He actually read for the role. After the first reading, I did not consider anyone else because I was really blown away by his audition.”

The filmmaker also discussed the reasons for the narrative structure, which purposely resists narrating Trisha’s life conventionally from childhood: “The film is structured like Ulysses. Some of the scenes are random. There are scenes that repeat themselves. I wanted it that way because when we try to remember a life, we remember the highlights and it’s not necessarily chronological.”

“When I make films, whether it’s a female character or a transgender woman like this time, I want to depict them as strong, intelligent women,” said Lana, when asked about sexuality and the characters of protagonists in many of his works, “Despite the prejudice they are facing, they are able to face life with optimism. That’s really the whole idea to this film. It opens with death, but what really matters is how Trisha lived her life.”

The press seemed to think that Ballesteros’s dynamite performance is award-worthy, and asked, “If you are chosen for a TIFF acting prize, should it be for Best Actor or Best Actress?” Ballesteros laughed, “Well, both!” He isn’t being greedy.