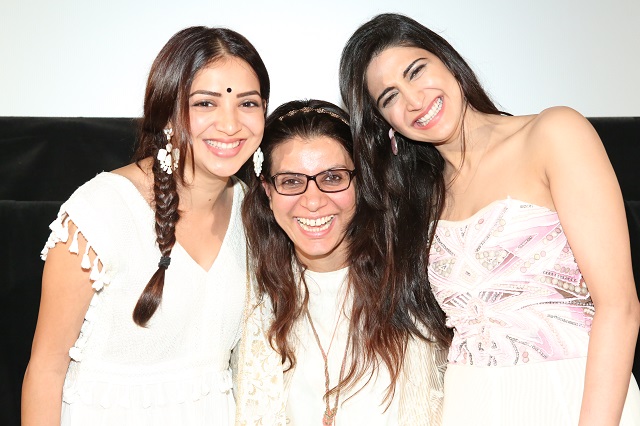 Alankrita Shrivastava (Director): I would just like to say thank you so much for coming. This is the first time that the film is being screened in public and it is a great honor and great privilege that you are here with us at the first screening of the film in the Tokyo International Film Festival.

Ahana Kumra (Leela)： This is the first time that Plabita, my co-actress and I have watched the film. Thank you Alankrita for giving us this opportunity to do such a powerful film. I don’t know what to say. I think I am going to cry. Because for the film like this to be made in India is so very impressive that it makes me speechless. I really hope that it sends out the message that it is supposed to do to each and every person in the world across the globe because I am sure that there are lots of women who go through the similar problems when facing the day to day lives. I thank the people of Japan.

Plabita Borthakur: Hi everyone. I am very excited to be here. I watched the film for the first time too. I cried and I enjoyed it. I hope all of you did too. Thank you Alankrita.
I really loved working on this film because the character that I played was very different from myself. We were close in terms of being a college girl about the same age but it was challenging for me to be somebody close to who I am but still not the same. The moment I read the script I knew by intuition that I wanted to be in the film. I loved what I watched today. I thank you very much for coming here today.

Host: Is it possible to screen this film in the regular theaters in India?

Director: We are working on the Indian theatrical release so we hope to be able to release the film.

Q: How many years do you think it will take for Indian people to see this movie and enjoy it as a comedy and really laugh?

Director: That is a very difficult question. I hope that the things will change for India. India is a very diverse country so not all the women go through the exactly same experience. That is because there are people who live in the big cities where women will have more freedom. But then there are also women who do not and are having tougher times. This is one sort of slice of a life kind of story so it isn’t that status of all the women are all exactly the same. But things are difficult for women in India indeed. I do hope that with films and stories and books and various forms of art and culture we are able to start conversations and make changes by challenging the status quo.

Ahana: Yes, as Alankrita said India is a very diverse country. We live in a city called Mumbai which is a metropolitan city; therefore, these issues seen in the film are not the kind of problems that I had to face. But what about the smaller cities? Are women really allowed to express their feelings? Can they really talk about their desires openly? Maybe not even to the women next to them. If I had a problem in a big city I can discuss it with a friend. I could just ring her or just send her the Facebook message across the globe. But what about the women in the smaller city. There are lots of challenges which women in the smaller cities have in India. The women face these kind of problem in the regular basis and they don’t even speak about it. But there are lot of things going on in India now. This is a very good time in India. There are changes happening right here in India. I’m sure the film will help the voices of the changes become stronger and speed up the discussions. We just hope that there is going to be a discussion between men and women of India.

Plabita: I feel that the change is happening. Thanks to the technology the voices are going from bigger cities and even to the smaller cities. The changes will come soon. Women will step out their houses more often and will be talking to people. More of them will get jobs. I don’t really know when things are going to change. I am from the very liberal family and have never experienced these kinds of problems but there was something that always told us that at the end of the day I was a woman and somehow man was the head of the family. I would probably be happier if the man felt alright to stay at home and take care of the children and not worry about people making fun of him.

Q: How will you deal with the problem if you were a woman in the tough situation? Will you cling on to your own dream or will you try to cope with the reality? How will you balance it?

Director: I think as a woman coming from India I made a fairy unconventional choices instead of having an ordinary marriage and children. I decided to move to the other cities and lived on my own. I wrote and directed films about the women and for the last 13 years I have spent working in the film industry. I think I have chosen to believe in my dreams. despite of the harsh reality around me. But having said that, I really do have an empathy for the women who do find it hard to pursue what is perhaps more fulfilling to them. I feel that society also need to make a change. If the woman has courage and determination she can do a lot. But I feel that sometimes we also judge the woman who do not make the courageous choices. My heart really goes to those who are stuck in the situation and find it really hard to break away from it but really pursue their dreams fully. However, the society is not enabling us to do that. I think in the ideal world you will not just consider the pragmatic reality of the lives and continue dreaming. But I think it is really hard and there is a price for it. One has to be really ready to fight it out. I hope that more and more women across Asia will find the courage for dreaming.

Q: Female directors have been making really important contributions. What do you think perspectives that are special to the female directors are like?

Director: I feel that it isn’t necessary for all the female directors to create the film with perspective and standpoint that are special to female. But most of all I feel that the female gaze is important. For example, how the story is being unraveled and who’s perspective it is being told and how woman is being portrayed. Mostly in the mainstream Indian cinema, gaze is predominantly men’s and women are often being objectified. It is all about how the camera moves over the female body. It just lacks the sensitivity to depict a real woman with texture so that women are either portrayed as the idols, victims or as heroes. Among the female directors there are some that unconsciously portray women in stereotype. The important thing is to examine the perspectives of the characters deeply and the physical gender doesn’t equal to the sensitivity towards female characters.