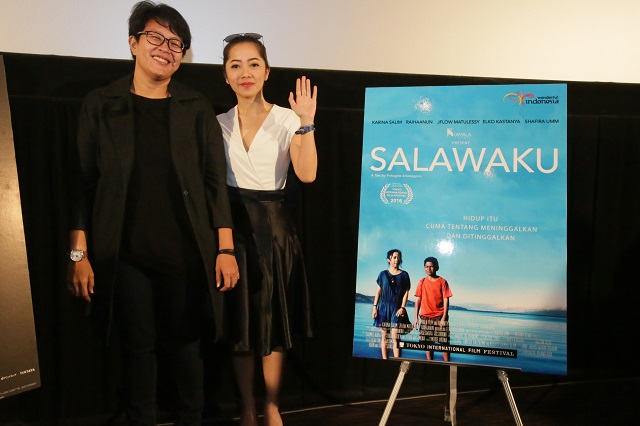 Pritagita Arianegara (Director): Thank you very much for watching this film.

Karina Salim (Actress): Actually it was the first time for me to see the film. Thank you very much for watching this film.

Q: Can you tell us about the location and the language of the film?

Director:The shooting took place in the island called Seram in the eastern area of Indonesia. It took 5 hours to the closest airport from Jakarta by the domestic flight and the additional travelling by car and the ferry boat to the island will total to 8 to 9 hours. Ambon is the language that is used in the region.

Q: I thought you all swam very well in the film. Are you actually a good swimmer?

Karina: Thank you very much. The truth is that I was afraid to put my feet on the seabed because of my childhood trauma. I have experienced the way to fight the fear in the film.

Q: Salawaku made a wonderful dive into the basin of the waterfall. Have you used the stunt?

Karina: Elko jumped by himself.

Q: Please tell us the reason for naming the character Salawaku?

Director: A word Salawaku means a shield and is a traditional craft of the Seram island. It was also used in the dance. We chose the name to identify the character in the story who protects his sister because the word shield holds the meaning to protect.

Q: What was the meaning of the red cross and the lighted candles that were set around the sister?

Director: Their parents have died about ten years ago. We used the red cross and the lit candles so that brother could remember about their parents through his sister.

Q: You have depicted the problem about the children who were born between the unmarried parents. Is it the theme that reflects the Indonesian society?

Director: I have researched and realized that the problem of the child born outside of marriage has also occurred everywhere and also in Seram Island. I was wondering why nobody covered the issue. That was the theme that I was most concerned with when I made an eight our trip from Jakarta to Seram for an interview,

Q: It seemed like the “actress” wasn’t wearing the makeup and lighting wasn’t used as well. How was the cinematography done in the film? Will you also tell us the reason why you chose the lead actress?

Director: Karina is actually a feminine person. But I intentionally chose her for Saras who is adventurous and a masculine character.

Karina: When I read a script and learned that the character was a boyish and a natural girl who didn’t wear any make up and wore no lipstick. She was quite different from myself so I was wondering what to do. People that I know also told me that I will not be able to play a boyish role such as Saras. I took a chance with an adventurously hoping to show my friend that I could play the part.

Q: Did you shoot the film camping at the site? You had underwater photography in the film so it must have been tough.

Director: We didn’t camp. We did script reading in Jakarta just like any other film. We also practiced swimming for few times but we didn’t camp out.