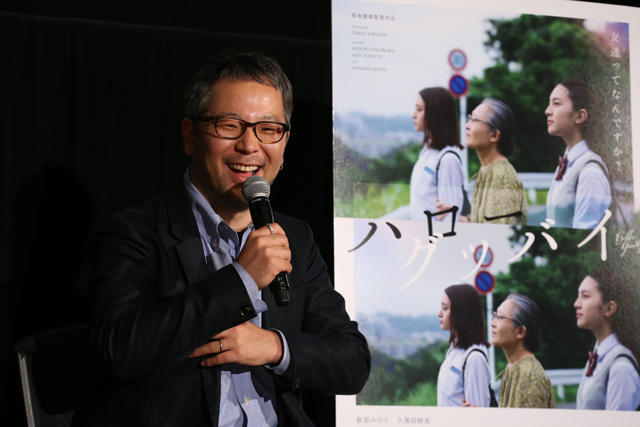 Two high school girls are confronting each other in a room. One skewers the other girl for not having real friends she can honestly talk to. The other dashes the remark by harshly responding with a rejoinder, saying that her opponent’s problem is flimsy, something like “mommy and daddy don’t take care of me.” In an age when digital technology allows us to be connected incessantly, these kids don’t even take the universal theme of loneliness seriously.

In this sophomore featureHello, Goodbye, however, director Takeo Kikuchi does have a serious concern. Following bountiful experience as an assistant director to established Japanese filmmakers like Kiyoshi Kurosawa, Takahisa Zeze and Yuya Ishii, Kikuchi knows his cinema syntax well enough to cloud the screen with the mildly washed-out color of loneliness. The film’s triumph is also indebted to the two leading characters, young women who are seemingly unintelligible but alluringly convincing, due to outstanding performances by Minori Hagiwara and Sayu Kubota.

Written by Ayako Kato, the film concerns Hazuki (Hagiwara), one of those girls who reign at the top of the school hierarchy system. However, her days of chit-chatting with her friends and hanging out with handsome boys are endangered when she suspects she may be pregnant with the child of an ex-boyfriend, who is now dating a girl from the same gang. On the contrary, the class president (Kubota) is at the lowest rungs of the hierarchy; you have to wait 50 minutes to even learn her name. Although she comes from a genteel family, the baseborn status in school renders her to live in rudimentary mutiny: pickpocketing and hiding people’s stuff. Despite their school status, which keeps them apart (except when the haves mock the have nots), their after-school lives start intertwining on account of an elderly woman named Etsuko (Masako Motai), whom they accidentally encounter.

Childhood loneliness might sound like an overly repeated theme, but Kikuchi successfully makes it contemporary: students exposed to smartphones all day, and the stone-faced outsider who discreetly rebels. Those who have graduated years ago might surmise that high school kids are disquieting aliens, but Hagiwara and Kubota cordially telescope into the subtle emotions of digital minds. What Hello, Goodbye has proven is that when the artificial layer of bravado is peeled off, there is still something universal and timeless that makes a friendship between the two girls believable.

Following the world premiere of Hello, Goodbye at TIFF on October 27, Kikuchi appeared at the Q&A after the screening, with programing director Yoshi Yatabe. “I’m relieved to get warm applause,” said Kikuchi.

Yatabe’s burning question was unsurprisingly about the two protagonists, played by Hagiwara and Kubota. He asked, “Wasn’t there a struggle to assign which role to which actor?” “Honestly, there was,” replied Kikuchi, “I struggled a little bit. During the process of casting, I thought it might work to switch the roles, but I became certain that the roles were cast correctly once we started shooting. Still, I sometimes feel that it might have been interesting if they have acted the opposite roles.”

Yatabe mentioned that the film’s working title had been Less Than Friends. “Some people might believe that I have many friends, but honestly I feel friendship is really a difficult issue,” noted the filmmaker, “The shape of human relationships can be an interesting subject for films. From the outset of this production, I heard from many high school students that they are struggling with how to cope with friends.”

While Kikuchi considers friendship a “universal theme,” Yatabe senses the form of friendship has changed: “It surely is a universal theme, but from my generation, there was no cellphone and I recall friendship being much simpler. Looking at your film, I felt friendship is becoming more complicated.” Kikuchi remembered a girl in Hiroshima who was murdered by “friends” through online communications. Even after directing the feature film, he admitted, “There is something unaccountable about friendship.”

Once the floor was opened to questions, a man shared his intelligent reading of stairs in the film as a sort of manipulating force: every time characters climb stairs, there is always a change in human relationships. The initial idea of stairs popped up simply because, “During location hunting, we found nice stairs,” laughed Kikuchi. Although the idea came accidentally, the filmmaker’s team did make the most of it. For his previous film, the award-winning Dear Deer, “We shot in standard aspect ratio, so we challenged it with depth of field. It was stairs this time, so going up and down was important.”

To wrap up, the filmmaker revealed that he was still concerned about the reaction of audiences and still cannot believe that he is at TIFF, since the film was shot in July. Instead of verbal rejoinders, the audience cheered him up with another round of warm applause, which concluded the Q&A on a happy note.