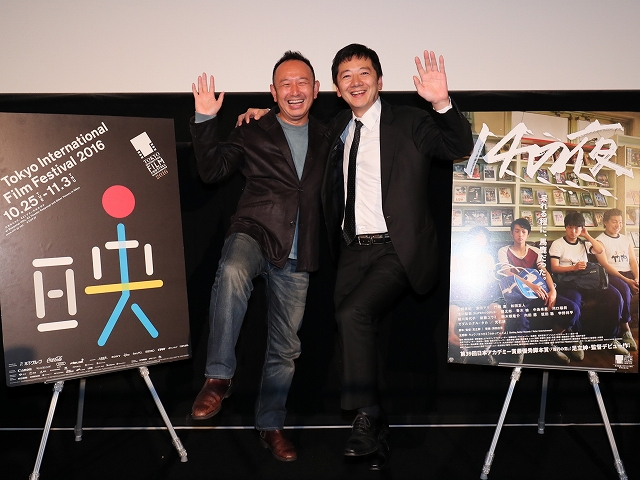 Acclaimed screenwriter Shin Adachi tackles the issue of onanism head-on in his directorial debut, 14 That Night, playing in TIFF’s Japanese Cinema Splash section. Although there are parallels with his script for Japan Academy Prizewinner 100 Yen Love (14), in which a woman changes her life by taking up boxing, Adachi’s freshman feature focuses on a teen boy who is desperate to escape from his dreary surroundings. While there is hilarious comedy with silly sexual gags, Adachi’s film does not omit the painful sufferings of youth, and he structures a poignant drama rather than simply penning a crowd-pleasing sex romp (minus the sex).

TIFF Programming Director Yoshi Yatabe introduced Adachi and producer Gen Sato after the world premiere screening on October 28, and mentioned 100 Yen Love, which won the Japanese Cinema Splash section two years ago and went on to be an indie hit. He asked, “In what way has the tremendous success of 100 Yen Love affected you?” Laughed Adachi, “People started actually reading what I’d written.” Since he had started as an assistant director, directing his own feature film had been his dream. The only reason he “dabbled in screenwriting” is that he thought of it as “an easier way to be a filmmaker.”

“The plot was ready even before 100 Yen Love,” noted Adachi, “By the time I was thinking of producing the film independently, Mr. Sato got interested in the project.” Speaking from a producer’s point of view, Sato said, “This is a film about boys who are dying to touch some boobs, a kind of movie that is difficult to make. Right after the success of 100 Yen Love, I thought now or never.”

The first question from the audience was that every viewer was secretly wondering: “How much of the film was based on your actual experience?” Adachi shocked everyone with his answer: “65 percent.” Even down to the porn actress coming to town. “It’s true that there was a rumor about that — they would let us touch her breasts after midnight. We actually went. But of course there was nothing going on, so we just went home.” This is not the only childhood experience that Adachi utilized for the film: “I’ve mixed a lot of episodes and made them all happen in one day.”

Yatabe was curious how Adachi prepared the four boys for their roles. “It was my directorial debut and I had to direct child actors, so I felt a necessity to spend plenty of time on rehearsals. But I myself didn’t really know what to do. It seemed fine, but something was wrong,” admitted Adachi. “On the first day on the set, though, they were really good. I have no idea why they could change so much.”

“The director always acts as if he has done nothing, but the rehearsals were really impressive,” praised Saito, “Thanks to his screenwriting background, he came up with so many ideas and added a few lines during the rehearsals. I felt scenes were getting better and better.”

The producer was not the only one impressed by Adachi’s accomplishments. They always say you should write what you know, and by sharing his own teen angst with the world, the newly minted writer-director has clearly found his métier.

14 That Night will be released theatrically in Japan on December 24.