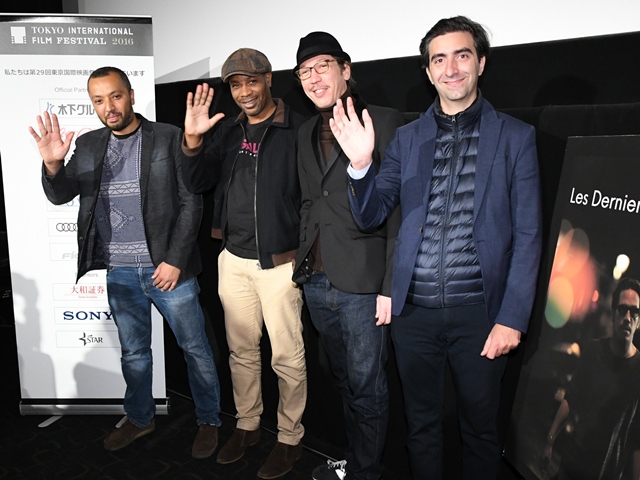 Another side of Pigalle, the legendary Parisian neighborhood, home to the Moulin Rouge and the gateway to Montmartre, is on display in Hamé and Ekoué’s Paris Prestige, which had its international premiere on October 29 as part of TIFF’s Competition section.

Hamé and Ekoué have had a 20-year history together as founding members of the progressive, political rap group, La Rumeur. Paris Prestige is their debut feature film, and the Pigalle they show is the vibrant, hustling and sometimes violent world of immigrants from Africa and the Arab world —the poor and displaced. The story is couched in the tensions, conflicts and love between a pair of brothers, Nas (Réda Kateb), recently out of prison and ready to hit the scene hard, and the older Arezki (Slimane Dazi), a bar owner who’s had enough of the tough life in Paris.

The co-directors, along with lead actor Kateb and producer Benoit Danou, appeared at a press conference following their TIFF debut.

Ekoué spoke of the reason they chose to set the story in Pigalle: “Pigalle is a very special place for us in Paris. We were born in Pigalle, so we have a long relationship with the area. Our office is there. Our roots are there. It’s a memorable place for us. We know it very, very well. And how it has changed. And its history. So we wanted to depict this area of Pigalle in this film.”

When asked about how they split responsibilities in their collaboration as directors, Hamé responded, “Actually this is the product of two brains together. And we really did all the things together. It’s hard to separate or divide what we did, from the screenplay, to the shooting of the film to producing it. So we did it all together. Creatively there were tensions at points, so we had many discussions. There was a trust between us. And we share the same sensibilities. Some are different, but we worked together on every detail of the film.”

“There’s a long story between us,” Kateb added, describing how he got involved with the project. “My answer won’t be as long as the story. But, we’ve been friends for many years – even before I started to work in movies. I felt like I was in the family in a creative way and in the relationship way, with love and tensions, as Hamé said. And I think this is the first time I said yes for a movie before reading the script. We agreed on many things and I really wanted to be part of a point of view on Paris today, of our generation, the people you can see in the streets who are missing so much on cinema screens. And it was a strong, deep and beautiful journey we had together.”

Producer Danou concurred: “They are like family to me as well. There were actually two reasons that I wanted to be part of the film, the first one being that the screenplay was really wonderful. And the second was, that people who are usually not spotlighted, who aren’t focused on as characters, are in this film. And there’s a wonderful warmth to the film.”

In the beginning, the character of Nas is portrayed as a bit of a loose cannon, quick to anger, flighty. His brother Arezki is more gentle, but strong and stern. There are definitely issues between them. They each change as their story develops. When questioned about why the directors chose to portray their main protagonists in a not-so-positive light, Ekoué answered first.

“In the first part with his brother, they’re in a difficult situation. And then it starts to change. Through the two brothers, I really wanted to portray not just them, but the life in Paris of the poor people, the reality that faces them. It’s a very hard life for everyone. The real estate is very expensive and it’s very hard to make a living in Paris. One must somehow find a way to earn money to survive — whether it is legal or illegal. That’s the reality. And that’s what I wanted to portray through these two characters.”

Hamé was quick to add: “I think that through the two brothers, we’re really giving voice to the other characters in the film. They have to all make a living somehow. And we’re not passing any judgment. But they all have their reasons to survive and to fight for survival in this society. Nas, in the beginning, very much shows attitude toward his older brother. But you find out the reason why he’s like that. He’s been sort of kept under house arrest. He’s grown up in a different situation than his older brother. But also the older brother has his reasons, because he owns a bar and Nas comes in and sort of takes things from him. There are a million reasons for the things that they do. And sometimes there’s a violent side. But they have to keep going. There’s a formula where you come up against situations and you have choices to make. And you have to make those choices because you have to survive. But we’re not passing any judgment whether that’s a good choice of a bad one.”