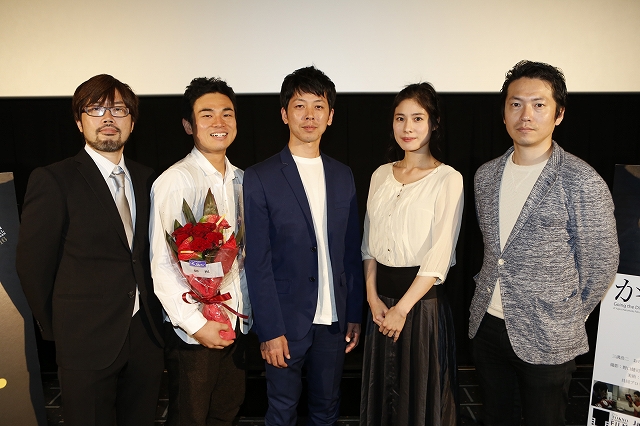 Yujiro Harumoto’s Going the Distance had its world premiere on October 29 as part of TIFF’s Japanese Splash section. Harumoto and his up-and-coming cast, Shinichiro Matsuura, Masahiro Umeda, Yumi Endo and Nobu Morimoto took the stage soon after to talk about the film with the audience, who had clearly been moved.

The story deals with the conflicts of Asahi (Matsuura), a boxing trainer, who’s torn between fealty to his best friend, fellow orphan Hirota (Umeda), and being up front and honest with his fiancée, Kaori (Endo). Hirota gets scammed by one of the gym’s patrons, Mr. Kita (Morimoto), to whom he was introduced by Asahi, which starts a trajectory that may lead to tragedy for Asahi — a tragedy largely of his own making, due to his inability to communicate and his misplaced notion of family.

During the Q&A session, Harumoto revealed how the project developed: “Matsuura and myself, we actually met on Facebook,” he said. “He was interested in my work and we had the opportunity to work on a TV drama together. And at the wrap party we talked about wanting to work together in some way. I was an assistant director at the time, and both of us were still trying to learn our craft and we needed to gain experience. We wanted to do a film together. We knew our skills weren’t polished enough. We didn’t have the experience to tackle something beyond what we knew. We couldn’t be too ambitious. We wanted to start with something based on our own experiences. So I asked him, ‘Is there something that you can share?’ And he started talking about his own experience. So half the film is essentially based on his real life.”

“But thankfully,” Harumoto hastened to add, “he had a good best friend and he ended up being able to marry his fiancée in real life,” he added

Matsuura corroborated, adding more details. “I actually am and was a boxing trainer, and I was in fact scammed by a man who was a member of the gym. He had asked if he could be introduced to a fisherman, who could supply fish [for a restaurant]. And the scam happened exactly as it was shown in the film.” However, Matsuura pointed out that he admired “the director’s ability to turn it into something even more.”

Ueda, who plays Matsuura’s best friend, described how the process of playing a character based on a real person. “I was told a lot about the kind of guy he was,” he explained, adding, “he struck me as a real man’s man. And I was excited to play the part, even though there was a great deal of pressure playing somebody from real life.”

Endo, who plays Matsuura’s fiancée, discussed her own difficulties with the role. In a pivotal scene, she must confront the man she loves, who inexplicably asks to postpone their wedding. “As my character cannot accept the postponement,” she explained, “I didn’t want her to come across as a villain. So, finding that right balance so the audience can relate to her decision – that was the tough part.”

Morimoto, who plays the scam artist who takes the men for a ride, and the disappears with a great deal of money, offered his take on his role: “Of course I’m not a con artist in real life. Just seeing the ramifications of the actions of my character, I’m almost compelled to apologize to everybody. But even through I’m not like this character, in the performance I tried to stay true to my real-life experiences and not go beyond that and to find something of myself to fit into this character.”

The friendship between Asahi and Hiroto in the film is particularly natural and convincing. As Harumoto describes it, “I was trying to really show the friendship, the relationship they had beyond just dialogue. I was showing them jabbing at each other or having them ad-lib their dialogue and joke around. A lot of things were added on the set that were not in the script.”

The film’s denouement brings the buddies together after a period of separation, marking a new beginning in the resolution of conflicts and recognition of what family means. It was particularly important for Harumoto, who explained, “In making a film, I feel that the most important thing is the last shot. Essentially the entire film exists… and all the editing leads up to that final shot, where you slowly come back to reality. And I love that moment. It’s my favorite part of a film.”

Answering a question about the prevalence of handheld camerawork in the film, the director admitted, “I’m very much inspired by the work of the Dardenne brothers. And they have a very documentary style of filmmaking. They often follow their characters from behind. They really show the subjectivity of the characters. And I feel that to place the camera too stiffly and to edit and crosscut between characters, feels a little too artificial, too manipulative. And I wanted to minimize that.”