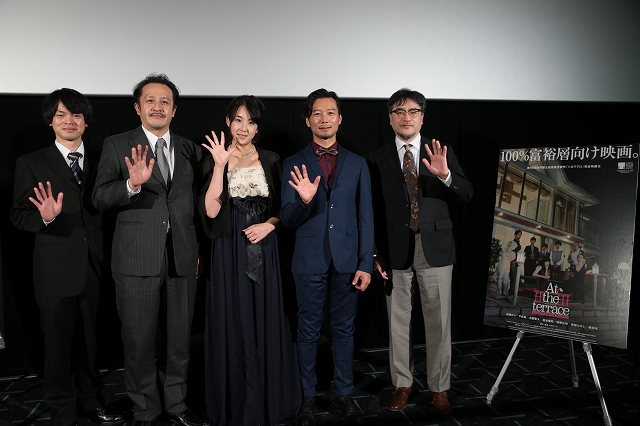 A high-minded, high-mannered dinner party hosted by a bourgeois couple for a group of vaguely-acquainted business associates devolves into an awkward series of confessions, flirtations and fetishes over the course of the film’s riotous 95 minutes.

It might sound like something from the mind of Noel Coward or Noah Baumbach, but it’s actually the latest film from Kenji Yamauchi, the playwright-filmmaker behind Her Father, My Lover, which debuted at last year’s TIFF.

At the terrace, which is playing in this year’s Japanese Cinema Splash section, is based on the director’s own play “Trois Grotesques,” and stars its cast, including Kei Ishibashi, Ryuta Furuya, Kenji Iwaya and Hiroaki Morooka, who were on hand for a Q&A session with their director after the film’s jam-packed screening October 29.

Naturally, many of the questions centered around the play’s transition to the silver screen.

“I thought a lot about whether I should change things for the film version,” said director Yamauchi, “but I thought it would turn out half-baked. I felt from the beginning the play would work as a film.”

Ishibashi, who plays the party’s flirtatious and brutally frank hostess, added that while she was afraid her performance, honed on the stage, would be too much for a film, Yamauchi “kept pushing me to go bigger and bigger.”

One key difference was, of course, the presence of cameras (sometimes as many as four at a time), leading to a few happy accidents, recalled Iwaya, who plays the film’s Yasunari Kawabata-quoting host. “We did really long takes, and sometimes we weren’t sure if we were still filming or not, so some of that very natural conversation ended up in the film.”

In At the terrace, as the night progresses and the libations flow, the initially well-mannered, upper-crust characters reveal their tics, jealousies and base human desires in lines of dialogue that kept the audience alternating between cringes of embarrassment and howls of schadenfreude. The director was asked whether satirizing bourgeois society was one of his aims with the play and film.

“The tagline on the poster jokes ‘100% catered to rich people,’” answered Yamauchi, “but that’s marketing, of course. I wasn’t particularly thinking of making fun of rich people or anything. Actually, my method is to decide what actors I want to use, then figure out a story I want to see them in.”

In this case, Yamauchi’s inspiration was the two lead actresses, Kei Ishibashi and Kami Hiraiwa, both of whom appeared in the director’s Her Father, My Lover.

Case in point: Yamauchi cast Hiraiwa, whose white, translucent skin is legendary in the film industry, as a party attendee whose beautiful bare arms serve as the powder keg for a night of sexual antics. TIFF Programming Director Yoshi Yatabe, who was on hand at the Q&A, asked Yamauchi his personal view on the various fetishistic themes that appear in the film.

“I… don’t hate them,” Yamauchi replied to laughter.

Ishibashi, whose prominent chest plays a prominent role, added, “I’m actually not that well-endowed, and once Mr. Yamauchi found out I have a complex about it, he kept writing big-chested characters for me, which made me happy.”

“My goal for Ms. Ishibashi’s character was a kind of Fellini-esque, big-breasted goddess,” said Yamauchi.

Apropos Fellini, Yatabe noted At the terrace often feels more like a Western film than a Japanese one, including in the setting itself, an elegant house.

“Not to mention, everyone starts dancing,” added the director, “that’s rare in Japanese films, but quite common in Western ones, so I wanted to go out of my way to do it.”

“But,” he added, “the dance scene has a purpose in the narrative too. You need these beats in the story to keep it moving.”

Yatabe, peering around the theater to make sure no other Japanese Cinema Splash directors were in earshot, noted that while most of the films in the category are by and for young people, At the terrace seems to be a rare Japanese film for grown-ups.

“Well, I’m of a certain age myself,” said Yamauchi in agreement, “I think in the industry, you basically have films for young people or specialty films for older folks, the ones that play at 11:00 in the morning. There’s no in-between. That’s the audience I’m aiming for.”

Tokyo-based grown-ups who weren’t able to get their hands on tickets for either of At the terrace’s TIFF screenings are in luck, as the film will run from November 5 to 11 at the newly renovated Musashino-kan theater in Shinjuku, with post-screening Q&A sessions.