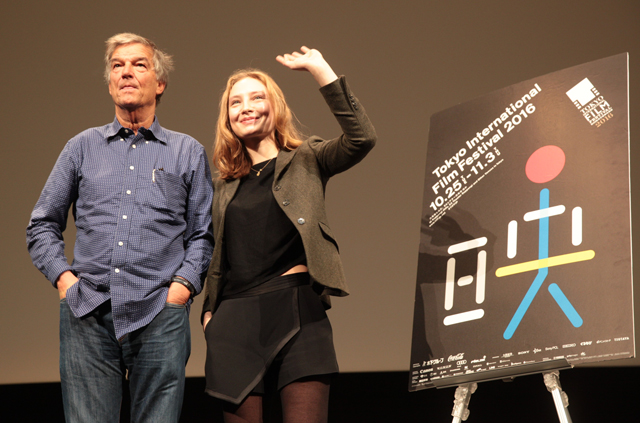 French director Benoît Jacquot began working with legendary writer Marguerite Duras in the 1970s. He’s known for his work bringing a particular sensitivity to women’s roles and bringing out the best in his actresses, often helping launch them into international renown.

His new film, Never Ever, finds him collaborating with Julia Roy, who’s starred in a handful of films. She not only showcases a stunning performance in the film, commanding most of the screen time, but she also wrote the script, adapted from Don DeLillo’s novella “The Body Artist.”

Never Ever begins with an amour fou, an impetuous love affair between Rey (Mathieu Amalric), a self-centered film director, and Laura (Julia Roy), a performance artist. They meet cute at an art center in Portugal, where he leaves a screening of one of his films and runs across her in an upstairs gallery, where she’s performing an abstract piece. Their eyes meet and a grand affair begins.

Rey, whose reckless desire complements a general recklessness in his life that is ultimately self-destructive, brings Laura to his seaside villa and then, crashes his motorcycle. Laura must pick up the pieces, and after a short time, she seems to be going mad.

Benoît Jacquot and writer-star Roy came to Tokyo for the October 30 screening of their film in TIFF’s World Focus section, and spoke at a Q&A session afterward.

Color plays an important role in Never Ever. The interiors, the clothes, the landscapes are shown in deep, muted tones, creating a mood of uncertain and brooding mystery. When queried about the use of this palette, Jacquot slyly replied, “All the colors have reasons, but we have different people that were in charge, so I don’t remember all the reasons. It may seem a bit funny but there are reasons.”

However, he did reveal one small tidbit of his strategy. “At the beginning of the film, when Rey and Laura meet, I put her in black so that her dress and the black background blended together, and her white face and hands stand out to give a strong impression.” And he offered a simple and somewhat unexpected explanation of Laura’s wardrobe, saying, “The character of Laura is always dressed in black, because Julia in real life normally wears black.

He added, “In most cases, my films are like documentaries of the actresses themselves, so what they wear you can also see in other films as well.”

Roy was asked about her acting role in relation to her role as scriptwriter. She replied, “An actor is like a blank sheet of paper. They are given the script and they just play the role. But in this case I wrote the script, so I know the character very well, more than anyone else. And because of that, I think I had much more freedom. I knew Laura very well. It was easier for me to play her.”

Jacquot spoke about his position as a director of actors. Although he only hinted at an explanation for why he is known as an artist who pulls the best from his actors, he explained: “When I imagine who’s going to act in the film, their role principally and practically, I wait for actors and actresses who tell me and show me, in the films I make, aspects that I maybe know or that I don’t know precisely. So for me, these interpreters, these actors and actresses are the key. And so I try to choose the best keys to open the doors of my films.”

He mentioned that with this collaboration with Roy, it had been the first time one of his actors wrote the entire script. He often collaborates with his actors, allowing them a modicum of improvisation and input into personalizing and rewriting lines. However, when it came down to his inspiration for making Never Ever, he stated concisely, “I wanted to make a film with Julia.”

The question came up about how personal experience might influence performance art. The denouement of the film shows Laura doing a performance before a rapt audience, touching on the points of her own recent experiences. It was unclear, perhaps, whether her seeming madness had been just her way of developing a performance art piece.

To which Jacquot replied, “It’s open to interpretation.”