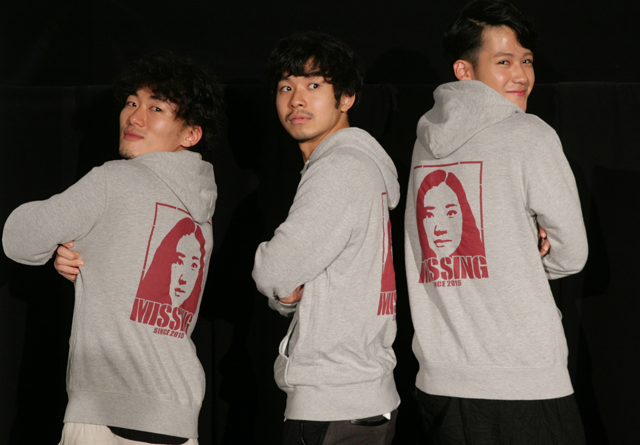 Hurtling across the screen with startling visual and verbal energy, driven by a propulsive soundtrack and punctuated with choreographed mayhem, director Daigo Matsui’s new film Japanese Girls Never Die is a high-velocity thrill ride through three generations of Japanese youth that is above all a call to female self-empowerment. Written by the author of the novel on which it is based, Mariko Yamauchi (a woman), produced by Yoko Edami (a woman) and starring two of Japan’s hottest young actresses, Yu Aoi and Mitsuki Takahata, the film condemns gender disparities, ageism and other social disorders, while also demonstrating an unshakeable belief in the future of today’s “fairer sex.”

Shortly after meeting fans at the sold-out world premiere in TIFF’s Competition section on October 30, Matsui and the film’s two male stars, Taiga and Shono Hayama, turned up in matching gray hoodies for a press conference — and immediately pivoted 180 degrees to reveal the iconic missing-person image of Aoi from the film, printed on the backs of their jackets. “Ms. Aoi wanted to be here,” said the director.

In Japanese Girls Never Die, Aoi plays Haruko Azumi, a 27-year-old loner who lives at home in an unidentified backwater, and works in a cramped office with two sexist bosses who spend their time drinking tea and dispensing the kind of unwanted advice that is now called sexual harassment. When her older coworker suddenly marries a Frenchman and leaves for Burkina Faso, Haruko gets serious about her own possible escape. At a wedding, her high school friend warns her “Marriage is hell — [my ex] never washed a single plate!” But Haruko is sleeping with an old childhood buddy and imagines he will overcome his disinterest. When he doesn’t, and Haruko suddenly disappears, the real story begins.

Across town, effervescent 20-year-old Aina (Takahata) has begun frequenting love hotels with former classmate Yukio (Taiga), and soon joins Yukio and another classmate, Manabu (Hayama), in a Banksy-inspired graffiti trio. They appropriate Haruko’s missing-person poster image as their signature, spray-paint hundreds of stencils around town, and a social media star is born. The twitter-sphere explodes in speculation about Haruko’s gruesome fate, a roving gang of high school girls beats up “middle-aged” males in the area and finally, a local NGO underwrites a “Missing Girls” theme park.

Matsui (Afro Tanaka, Wonderful World End, Our Huff and Puff Journey) is no stranger to films about young adults, but this is his first to encompass teens, 20-somethings and, with the 40ish secretary in Haruko’s office, a preceding generation. All suffer varying degrees of degradation at the hands of men, but each will find reservoirs of inner strength and choose living well as the best revenge.

Matsui explained to the press that the casting of Aoi was serendipitous. “She’s the same age as the producer and myself, and I see her frequently.” he said. “I thought her face would look great on the [film’s much-replicated] missing-person poster. She is beyond talented. She has monster talent, like Godzilla. As for Ms. Takahata, I’ve worked with her before, and although Aina is not very clever, I needed an actress who was very clever indeed. Aina is also the opposite extreme of Haruko. So she had to be played by an actress who could command the screen in the same way that Ms. Aoi could.”

Shono Hayama enthused, “I’ve been a big fan of Aoi-san’s for years, and I was so thrilled to be in the same film with her, although we weren’t really in any scenes together. But I did have a lot of interaction with the stencil of her.”

Both Hayama and Taiga are the same age as their characters, and spoke briefly about the similarities. Yukio is desperate to escape his dead-end life, and Matsui thought of Taiga for the role immediately; while Manabu is practically complacent in comparison. “I’m exactly like him,” Hayama admitted. “I have so much excess energy, I’m exploding with it. I think that’s typical of my generation — we just want to enjoy life. And we’re very noisy.”

Nodding in agreement, Taiga said, “The three of us (graffiti artists) were just doing whatever we wanted because of our youth. When I saw the finished film, I realized that what we probably hurt this woman [Haruko]. We were scum! I felt so guilty for doing such a horrible thing.”

Asked why he had decided to so thoroughly scramble the film’s timeline and how he’d managed to achieve such complex chronological disruptions, Matsui said, “I don’t really know whether this was the right approach or not, but I did want to create some confusion, some chaos in the timeline.” He noted that the original novel was strictly chronological. “The reason for Haruko disappearing and going missing felt too obvious. I didn’t want to make the film that way. I didn’t want to express the story logically, I wanted it to be more impressionistic. I wanted the audience to feel it. So I cut it up into episodes maybe 15 times during the scriptwriting stage, and another 15 times during the editing.”

“I wanted to make a film that hadn’t been made before,” Matsui concluded. “And I wanted to depict the current era in Japan. I hope I’ve succeeded.” And then he reminded everyone that there’s an app on the Japanese Girls Never Die website that allows us to create our very own missing person posters.