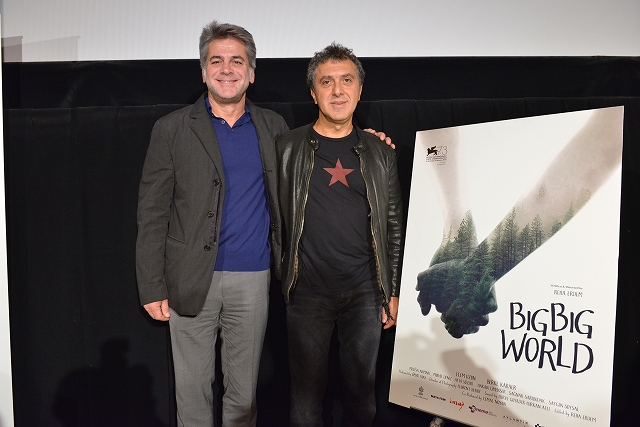 TIFF Competition entry Big Big World follows two young orphans who believe they are brother and sister, as they escape the city, where society preys on them, and take shelter deep in a forest. At first a veritable Garden of Eden, it gradually begins to consume them.

Appearing at TIFF for the ninth time with his ninth film, the acclaimed Turkish writer-director was joined by his longtime producer-production designer, Ömer Atay, at a press conference on October 31, prior to the Asian premiere of Big Big World.

Asked to comment on the metaphorical meaning of the woods in the film — as well as in his past TIFF entries Jin and Singing Women — Erdem replied succinctly, “For me, the forest is a space of refuge, and represents a fear that I have of cities.”

He continued: “One of the biggest issues in my country, and globally, I believe, is the lack of roots. That applies to the film’s characters, too. No matter where they go, they don’t feel as if they belong. I think the young generation represents a generation without roots. The biggest problem in cities today is this rootlessness.”

Opening in an unnamed Turkish city, with its bright lights as well as dark, dirty alleyways, Big Big World introduces us to Ali (Berke Karaer), a reticent young man who makes his living as a motorbike mechanic. He seems to have no friends, save for a transgender prostitute who calls herself “mama,” and no dreams for a brighter future. He’s focused resolutely on the present, and the impending fate of his younger “sister,” who has been adopted from their orphanage to become the second bride of a loathsome middle-class man.

Intent on freeing her, Ali finally devises a desperate plan and one night, executes it without a hitch. Ali then grabs a stunned Zuhal (Ecem Uzun), and they race out of the city by motorbike, riding further and further from their past. But one wonders: Are they fleeing from or entering the big, big world, and which world will prove to be more dangerous?

The siblings make their way deep into a forest, through fields of water and across a large body of water, where they begin to build a home of sorts for themselves. Ali is able to find work in a nearby village, fixing up and selling motorbikes; but Zuhal must remain at home, out of sight. With her, we explore the enchanting surroundings of the natural world, becoming accustomed to the rhythms of birdsong and animal calls, to the frequent rumble of thunder, to the several lost and demented souls who also appear to make the forest their home, and especially, to the mystical appearances of a white goat.

But the bucolic paradise gradually takes its toll on the young woman, who is suffering from an unnamed physical ailment, and as she seems to fuse with it physically, the natural world begins to affect her sanity.

Asked about the casting of the two siblings, who are each thoroughly believable as lost souls, Erdam corrected, “We’re never exactly sure whether they’re really brother and sister, since there is no record of relatives, no roots anywhere.” He then surprised the audience by saying, “Actually, Berke Karaer, who plays Ali, is not an actor. We needed an actor with a certain purity, but full of energy. We found him on the streets, and he was so fresh and talented, we didn’t even have him read the full script.”

As for Ecem Uzun, who plays Zuhal, “It is just the opposite. She’s a real pro. We needed someone who looks very young — she’s actually about 24 years old [but looks and plays 17 or so]. She is a trained actor, and very intelligent.”
Responding to a journalist who enthused, “I’ve seen all the other Competition films, and this one is the most beautifully shot of them all,” Erdem responded: “Thank you for the compliment. We shot in the forest for 6 weeks, with a crew that numbered about 30, although it did fluctuate. The director of photography was my regular, Florent Herry, and he gives me input all the time. I also like to receive input from the other crew and my actors.

“I went to the locations three or four times beforehand,” he continued, “to consider how we could best shoot there, and how we could merge my imagination with the reality. Shooting the scene at midnight [with a magnificent full moon that brings the forest alive in unexpected ways] was the most difficult.”

Nodding in agreement, producer Ömer Atay said, “This is my ninth film with Reha, and as always, it was really exciting to work with him. I am always surprised and satisfied with the results of our collaboration.”

It must have been very difficult to work with all the animals on set, commented another journalist. “No,” laughed the director, “working with animals tends to be much easier than working with humans.”