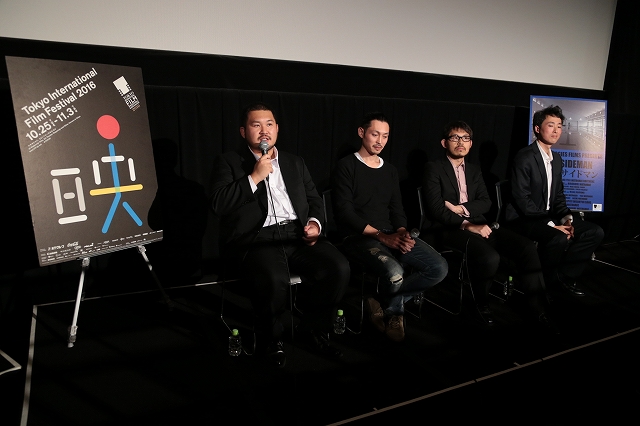 The audacious Watanabe brothers, producer-actor-writer-director Hirobumi Watanabe and executive producer-composer Yuji Watanabe, mark their third entry in the Japanese Cinema Splash section at TIFF with POOLSIDEMAN. Their first feature, And the Mud Ship Sails Away… (13), earned them a cult following on the international festival scene, and 7Days (15), surprised followers with its substantially different tone. Now the groundbreaking trilogy is complete.

Appearing at a post-screening Q&A session with Yuji Watanabe, cinematographer Woohyun Bang and lead actor Gaku Imamura on October 31, the director said he was grateful that the team’s production collective, Foolish Piggies, “is so supported by TIFF and its audience.”

The latest feature again constructs the singular Watanabe world of madness, in the preferred black-and-white cinematography, combining the styles of the previous films: the slow character study of 7Days and the witty dialogue of the indelible Mud Ship. However, the striking achievements of POOLSIDEMAN do not only lie simply in the always challenging spirit of Watanabe filmmaking, but in its thematic concerns as well. The brothers sucker punch the face of the happy-go-lucky Japanese film industry with their cinematic manifesto, which declares that film can be a political weapon that denaturalizes Japan’s detachment from the outside world.

From the outset, the camera follows the mundane life of a pool guard Yusuke Mizuhara (Imamura). Captured in symmetric photograph-like long shots and iconic long takes that resemble the Dardenne brothers’ stalking camerawork, the daily life of this lonely, completely silent lifeguard bears no excitement. We follow him through the same swimming club checklist, enduring others’ chitchat in the workplace, going to the same cinema, and eating dinner at McDonald’s. The only real peculiarity is his habit of listening to radio constantly, with its overflowing news about ISIS and terrorism. From Mizuhara’s emotionless, disquieting face, one soon begins to fear that he might one day join a terrorist group himself.

By the time POOLSIDEMAN seems to be another version of 7Days, there is a sudden narrative shift; Mizuhara has to temporarily work as a replacement guard at another pool, and drives there each day with his coworker Koji Shirasaki, the kind of guy who never stops talking and complaining about everything, played by the director himself in an unforgettable performance.

However, Shirasaki’s radical comments on Japan’s collectivism, its ‘majority is right’ way of thinking, and his hilarious ‘One Piece generation’ diatribe are so timely, so critical and so important, they are sure to resonate with those who are tired of the contemporary atmosphere of Japan. Even in the countryside, where terrorism seems to be of no concern, madness is universal human nature, agitated by the claustrophobia of small communities. POOLSIDEMAN is a very rare political film from an apolitical country, undermining the naïve notion that Japan is a homogeneous island, isolated from the hustle-bustle of worldwide issues.

Although the director was reluctant to reveal the film’s themes during the Q&A session, he did say, “One of themes is definitely about the Japanese male’s search for existence in the contemporary world. Basically, the protagonist doesn’t say anything. There are some conversations, but I structured them as an accumulation of meaningless dialogue. As a whole, those meaningless lines and repetitious expressions should agitate viewers to think about things.”

Despite the universality of the theme, the Watanabe brothers have remained faithful to shooting only in their hometown, Otawara, Tochigi Prefecture. “The basis of my films is always about the lifestyle of mankind,” explained Watanabe, and even in the filmmakers’ hometown, “The world is constantly changing. And to express those changes, I guess I’ve constructed my own style.”

POOLSIDEMAN marks the acting debut of Gaku Imamura, son of famed painter Kojiro Imamura, who is far more handsome in person, than in the role. According to the filmmaker, he chose Imamura because, “We’ve been friends since childhood, and he proposed to collaborate on something. Since I’m making films, he offered to help with anything at all, so I asked him to play the leading role.”

“I’d never acted before, so I looked on the Internet for tips,” laughed Imamura, “But it didn’t really help. I worked on my character by reading some articles about crimes.” During the long sequences in the car, where he must endure his coworkers’ rants, the only direction the filmmaker indicated was, “Don’t laugh.” [The audience all marveled at the actor’s ability to stay poker faced during single takes of increasing hilarity.] “Gaku is a cellist, so his concentration is wonderful,” praised the filmmaker. But Imamura humbly said, “I just tried to look distant.”

In response to a question on the working method of the brothers, Yuji Watanabe replied, “We have almost the same lifestyle, so we just progress step by step on a daily basis.” Ever since their first feature, the Foolish Piggies have worked with talented cinematographer Woohyun Bang, who said he constructed his highly aesthetic images “on the set with the director.”

To a question about funding support, Hirobumi Watanabe revealed that the estimated budget for the film was “just daily living expenses during the period of the shoot.” Fortunately, shooting at the pool — where the filmmaker was actually working — was fully supported by the Otawara Board of Education. “I don’t know why Board of Education supported us,” laughed the director, “but they cooperated fully, which was a huge help.”

Audience members were happy to hear that the Watanabes consider low-budget filmmaking to be their strong suit: “It’s precisely because we are low budget that we can come up with certain creative solutions,” said Hirobumi Watanabe. Their independent spirit led to one excited audience member comparing them to Bob Dylan, an artist who also expresses political beliefs through a particular medium. “Me and Dylan?” the surprised filmmaker laughed. “I say what I want to say in the film. It’s best to express myself only through moving pictures.”