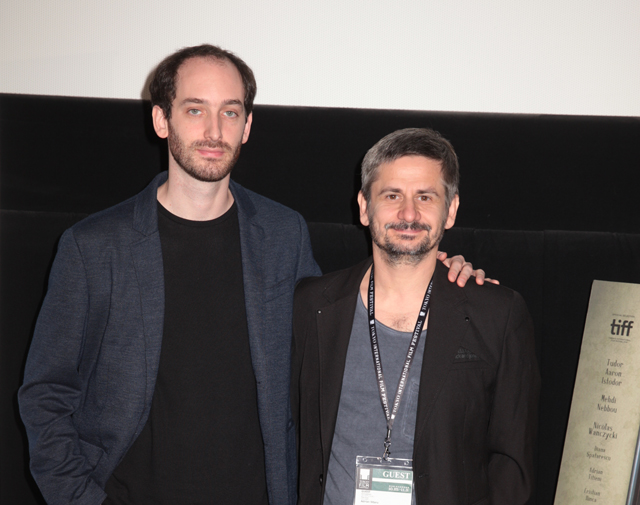 These are the difficult questions posed by The Fixer, the new film from Romanian director Adrian Sitaru playing in TIFF’s Competition section.

Appearing with his lead actor, Tudor Aaron Istodor, at a press conference following a screening of the film on October 31, the helmer said, “I don’t have any of the answers myself, but I wanted to present these dilemmas.”

The Fixer is the story of Radu, played by Tudor Istodor, a young fixer who tracks down stories for French journalists reporting on Romania. The tale begins when a 14-year-old victim of sex trafficking is repatriated back to Romania from Paris. Radu and a team of French journalists set off on a journey through the Romanian countryside to get an interview with the girl, going to lengths that find them questioning their real motivation – to help victims of human trafficking, or to get a great scoop?

“The film is inspired by a true story,” explained Sitaru. “Before we went to film school together, the cinematographer I work with [Adrian Silisteanu], who shot, wrote and produced this film) was a fixer in Bucharest. It more or less happened to him, this story, and it stuck with him.”

While some films about controversial issues like sex trafficking go for big, bold melodrama, Sitaru and Silisteanu shot The Fixer is a naturalistic, almost documentary-style work with no soundtrack music, focusing on the subtleties in his characters’ interactions. There are no heroes and villains here, either.

Explained Sitaru: “What I tried to do was empathize with the journalists’ story.” The Fixer’s characters “are people trying with the best intentions… saying, ‘if they show this girl, maybe we’ll save another hundred girls. But are you sure it’s our right to abuse a girl or maybe to put her in bigger danger just because we have this argument?’”

For Sitaru, it’s a very relatable theme: the same dilemmas the journalists face in The Fixer apply to film directors as well.

“It’s possible that people suffer from the dictatorial way I make films. Who is giving me the right to be a kind of God in the name of art?”

One of the best parts of the film is the subtle yet affecting performance by lead actor Tudor Aaron Istodor, whose young fixer, out to prove he can make it in the world of journalism, patiently and deliberately pushes potential interviewees to tell their stories. Istodor’s performance, and Radu’s quandary, reach their peak in a pivotal scene in which he realizes the lines he uses to coax interviews out of an unwilling interviewee are disturbingly close to those used by the men who abused her.

As a young actor, Istodor felt he could relate to his character and the moral dilemmas he goes through over the course of the film: “Of course I did research on journalism and talked to a real fixer about how he would react in this or that situation,” behind the story, said Istodor, about his preparation for the role.

Rehearsal also proved to be a crucial element in sculpting the performances. Istodor noted that they lasted two months, and involved many meetings and discussions to make sure “things came out right in the end.”

But ultimately, most of Istodor’s preparation came down to asking himself, “How can I relate myself to the character? I’m 32, and the character is 30. We’re not boys, but not men — we’re both trying to prove ourselves, him as a fixer, me as an actor. But what are we trying to prove, and at what price? Maybe we should step back and reassess what we’re doing.”

One intriguing subplot that adds another layer to the character of Radu centers around his relationship with his young son, whom he relentlessly pressures to win a school swimming competition, putting exceptional strain on their relationship.

Sitaru said this subplot connects back to the idea of applying pressure to others to get what you want: “How men and women abuse their children – this is another theme. I just put this question to myself: what we do to our children and in our jobs and why it happens.”

The Fixer is a dark, contemplative tale, but one that ends on a positive note, as Radu silently embraces his son in an expression of pure love. Perhaps there is hope for the fixer after all.