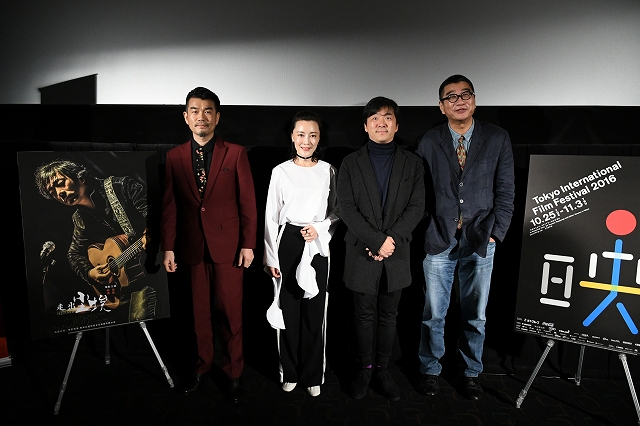 Q: How was this film received in the countries other than Japan?

Director: Since we are still searching for the distributor, we haven’t screened the film in China . The film tends to be more artistic and may somewhat differ from the entertainment titles that the general public may prefer. There aren’t so many viewers who prefer artistic films like this in China and that is why it is taking time to find the distributor. They are concerned whether it is possible to make the recovery of their investments. Even if there are distributors who might be willing to, the smaller distributors don’t have enough funds and the director doesn’t have the money either. Currently, we are thinking of using crowdfunding method to gather the cost for our distribution advertisements and plan to release the film on March next year. I will be able to let you know how well the film was received in China then. We are hoping that our participation in the Tokyo International Film Festival will help us secure the Japanese distributor. If the film is released in Japan, I will like you to tell me how well the film was received here.

Director: I think it is an interesting question; however, the film does not depict about a good and honest people being rewarded. What this film is depicting is the life of the middle-aged people. The middle-aged people are always busy and are enslaved to business and their daily lives. Their day to day lives are so busy that they even forget their own name and age.
My mother has passed away during the initial stage of this film making about 2 years ago and my co-director, Mr. Ryu has also passed away suddenly before he reached the age of 50 years old. I wanted to depict an idea of whether it is necessary to be burdened with hardship in life. This is my answer to your question.

Mr. Qin: I am very happy that you asked this question because I have been thinking about the same issue. I have been playing rock music for 30 years. It is said that being a rock musician in China is difficult from a worldly perspective. The government tells us to do as we please and we have been continuing it for 30 years in such situation. We have even risked our lives numerous times during the performances at the concerts held in China. Besides my son is suffering with the illness similar to autism; but, he likes the film very much. I want to show my son that his father can perform in the film. Our family have decided to follow through with all the problem he has no matter what. That is why I want to overcome all kinds of difficulties. Because hardship you experience will be your greatest inheritance in life.

Ms. Feng: I believe that we encounter the situation in our lives where we can make various choices. Deciding what film to watch is one of a choice too. I think all people should try to make an effort to do their best. But doing your best doesn’t always guarantee successes. But I believe at least you are not doing a wrong thing. I am not sure if all dishonest people will have bad karma but I do believe that good people will be rewarded.

Mr. Qi: Making a living certainly doesn’t mean all good things, but you shouldn’t give up the hope. You should always have hope in life no matter what the circumstances you are in and keep on living. Your hope will surely come true.