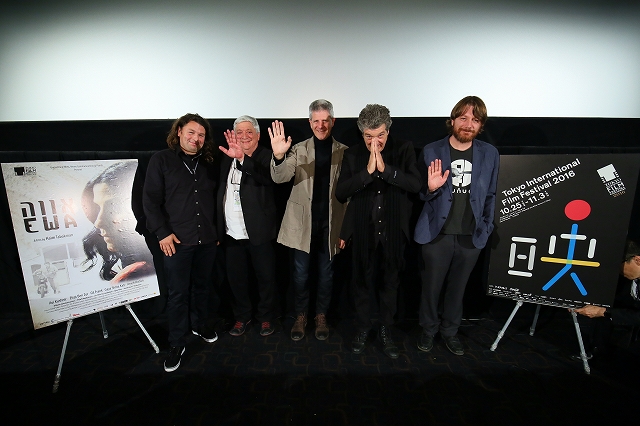 Haim Tabakman (Director): Good evening. This was my first time to watch the film with the audience. I would appreciate if you can give us a live feedback and discuss about my film.

Q：I will like to ask the director about the background of this story. Did this really happen in the society of Israel?

Director: Cases like this happen a lot in Israel and the film is based on the fact. There are numerous cases in which families or a spouses disappear and had been thought to be gone forever but were actually alive. The film is based on what really happened to the scriptwriter’s family who wrote the first screenplay of the film.

Host: It is also known from the cases in Asia that similar incidents occurred following the end of the war.

Q: I will like to ask the actor, Mr. Avi Kushnir, when you acted the particularly important psychological depiction like this role, did you receive the advice from the scriptwriter’s family or did you act from your imagination?

Avi Kushnir (Actor): As an actor I have acted each situation. I was born and raised in Israel; therefore, there are certain things that I remember as an Israeli. It is my memory about the childhood. A woman used to live in the house that I lived in. She has returned from the concentration camp and was always angry about something. I recall she was mad when we were playing with the ball or was mad at the dog that we kept in the house. She was always angry and seemed to be fearing something all the time. I couldn’t figure out the reason why. So I asked my parents “Why is the woman always mad?” Both of my parents told me to be quiet. “You shouldn’t refer to the subject nor talk about it. ”
I put the emphasis on two things when I developed the role. The first emphasis was on the husband who has been betrayed by his wife. The second emphasis was on a man who didn’t know anything about the other man who was with his wife. I have acted the man who didn’t know what the other man was thinking about nor know his motives for doing what he did.
This film has very little context. As you can see in the film, the story is described through the leading actor. When we see a photograph of a little girl that is framed on the wall in the Emil’s house, there are no additional description about the little girl in the photo. There are no further explanations in the film because Emil already knows about it. Everything that is depicted here is what is seen through his eyes.
I have discussed the role with the director, Haim Tabakman. He eventually began to give me the tips and guided me to how I should feel when I was acting or what mentality I should be developing to pursue the role. Through this film, I have learned that the movie camera captures the respective qualities of the characters and the way of their thinking.

Q: The apple which appears in several scenes of your film were very impressive. I felt that there was a special meaning behind it because the apple also appears in the first acquaintance of the husband and wife. When Emil mentions “You smell like oranges and field of grass” to her husband, I wondered the reason why because you have used apples in several of your scenes. Tell us whether there was a special meaning for showing oranges and apples?

Director: Thank you for paying the attention on details. As for the apples, it is my personal preference. Our family has always shared apples with each other. I supposed we chose to use the apple for that reason. In the tea making scene with Yoel, he drops the slice of apple in the tea that he is making. Actually it is only the husband who can prepare the tea this way. It also shows the special ties between the individuals in the film.
I have shown the respective relationships of the characters and gave a great deal of thought when writing the screenplay. It was the artistic process. During the process I have recalled the story about my friend. My friend’s father was a very shy German and his mother was a Jew with the Yemen background. They were both Jewish but they have made an acquaintance just like Emil and Ewa. I have been told that they didn’t understand each other’s language; nevertheless, they shared an apple with each other and began to see each other.
Orange is the symbol of Israel. Israel has many orchards and are producing the large amount of oranges. The producing of citrus is a major agriculture in Israel. Since the leading actors were native-born Israelis, we were able to feel the country and scent of Israel in them.

Host: I have a question regarding the film production. Number of countries are credited in this film. Was the crediting simply because of their financing or was there a particular country that was participating during the development of the film? Was Israel the main production country of the film?

David Silber (Producer): As you mentioned, France, Poland and Germany appears in the credit. The distribution companies or production companies of each country conceived the liking for our film. They also liked the directors and the actors and offered to distribute the film in their own countries. Ultimately they provided us with the funds for the production of the film and that is the reason why we credited these three countries in the ending role. Another example is the cinematographer, Axel Schunepato, who shot this film. He is from the production company in Berlin and that is why Germany is credited. His work is wonderful and deserves an applause.

Q: Will you explain about the last scene of the film? The final cut is the long shot of the scenery with horse and the house. I couldn’t figure out the ending. Will you please tell us about it?

Avi Kushnir (Actor): I am sure that each one of you have given a thought about the ending. My son is with us today in the theater. The first time when he saw that scene he asked “Is that blurry thing that we see a grave?” So I told him that I didn’t know. In other words, I think there are respective perspectives for each person. As for my personal opinion, I think that the scene shows us that Emil and Yoel who decided to live together. It shows that Yoel has accepted that. If the film continued 5 minutes longer, Ewa might have come out from the house and served tea to Emil and Yoel.

David Silber (Producer): I was surprised what Kushnir’s son has just mentioned about something blurry because I wasn’t aware of it. But as a producer’s point of view, I feel that Ewa is still alive.

Director: I pray that “The blurry thing” is not a technical problem. What I hope is that you will return home and sleep on it and think whether Ewa is still alive or dead or what really happened to her in the morning.

Host: This is the type of film that keeps you thinking for 2 to 3 days. I understand that it is rather difficult to maintin such frame of mind. I hope you can keep this film in the corner of your mind. You can simply call it an open ended story. But I think this is a film which makes each audience think. It will take 2-3 days if you seriously contemplate on it but as the director mentioned now, I hope you can sleep on it and reflect on it again in the morning.