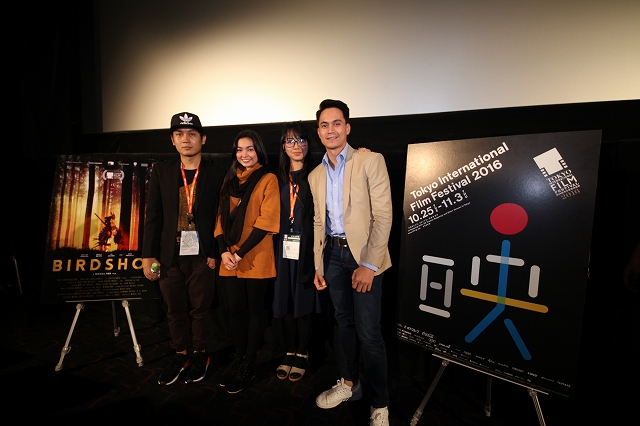 Mikhail Red (Director): I am Mikhail Red, the writer and director. I would like to thank all of you for coming to the world premiere of my second feature film. I hope you enjoy it and have lots of questions for us.

Q: I would like to thank you for the wonderful film. Will you inform us the episodes on how you formed Maya’s character?

Mikhail Red (Director): It is no exaggeration to say that Maya’s character is our origin. When we are born we are innocent like her. Unfortunately, the longer we live the more moral-less we become. We lose oneself rapidly. The morality is on the decline. In the opening of the film, the role of the young police man that Arnold Reyes plays is very innocent. Maya is innocent as well. But unfortunately the adults around her reveals about the real world. At first, the black and white was crystal clear for her. But she’s been taught that there are gray areas as well. She’s been told that sometimes you must become a predator in the Darwinian jungle. But Maya doesn’t chose to follow that. She tries to remain innocent. In this regard, I think she is similar to an endangered species. Such an individual is unique. In other words, I think Maya is a Philippine eagle.

Q：I thought that the composition of the story and the use of the music was wonderful. I will like to ask the director what kind of thoughts you had when you wrote the script. And the question to you all is what kind of problems you had during the making of the film.

Director: I came up with the idea about four years ago. It all started with the newspaper article that I happened to read. The article mentioned about the father and a son who was accused of killing the Philippines eagle and was imprisoned. I thought it was a very sad story. It is very sad that the eagle has been killed from the point of view of the wilderness protection.
But people who are living in the heart of the mountains near by the protected areas are uneducated and that is why they didn’t know about the protected species nor did they know that the killing was prohibited. I wanted to create a fact-inspired story. As this is a crime story, I wanted to cover the incident that actually occurred in the Philippines. Few years ago, mass murder of 58 victims occurred which included journalists as well. As shown in the film, the victims were buried in group. Socially, such incidents are covered with the smokescreen and never be out to the public or the detailed accounts were unspoken, so I felt that such issues must be highlighted. I wanted to choose the story with intricately intertwined moral. It isn’t easy to make a distinction between good and the evil. There is no such a thing as absolute evil in this film. As I mentioned earlier, Maya and the young police man were innocent at the beginning, but the society that surrounded and enclosed them also disgraced them and eventually gave no other choice but to adapt to it. That is why when Mary finally holds the shotgun towards him, I think she finds something that is like herself in his eyes. I added the cut of Mary placing the rifle down because I wanted to include that feeling.

Pamela: The worst problem I had as a producer was raising the money. In 2014 I received a screenplay from the director and the co-scriptwriter. I was worried about how I will raise the funds. I was able to raise $70,000 from Doha. Following that the film won the awards and earned the prize of $10,000. The famous Artikulo Uno Productions of Philippines also funded us as well. We have succeeded in gathering the funds. What is beleaguered as a producer is to deliver the accurate production costs that the director requests. We were able to achieve this and I am proud about it. For the additional information, Philippine films are produced with low budget but the film is shot with adequate number of days. I think that it is very important to pay the appropriate amount of remuneration to those people who worked for the film. I think I succeeded in accomplishing the both and believe I’ve done a good job.

Arnold: I haven’t worried much or experienced difficulties during my performance as the actor in this film. I was blessed with the company of a great producer and a director. Our director, Mikhail Red, had a very intelligent vision and delivered it accurately to me. To be able to work with such a director makes my work easier as an actor. I am proud to say that I have done the proper character building of my role. When I received the script I did various research for the character building of Domingo’s role and began to read the news article as well. I have studied the incidents that Domingo was involved in and the relevant history for the development of the characters. And I was happy because as Pamela said the production team dealt with us properly.

Host: There are various logos on the top and the bottom of the film poster. The providers of the funds for the Asian art films are clearly presented and easily understood. Such trend is becoming strong in the art film of Asia.

Q: Is there a meaning behind the character in the red clothing or a role intended? You mentioned the comparison between the innocent protagonist and the society stained in gray. Did you intend to add another layer between the two?

Director: I am not sure whether you have noticed, but when Maya and the old woman talk about the ghost that appears during the full moon; there is the scene where the victims are buried together and as you mentioned, there is a handcuffed man in a red shirt buried in the middle of the victims. The fragment of the red shirt that Domingo picks up is also from the red shirt of the same man. This is a spoiler of the film but there is a scene where an old woman pleads to help her find the family. I intentionally chose to have her carry a black and white photo. The farmer in that photo is the same man in the red shirt. The other victims are all the same and the man in the red clothes symbolizes it. It may be difficult to see the details but he isn’t wearing the wolf mask and his skin is eroded. As the massacre actually took place, I contemplated on the place most suitable for burial of the victims. I figured out that the preservation district will be the ideal place because the corpses will be difficult to find. One another thing that I’d like to add is that Maya is gifted with some kind of supernatural power. Because of her innocence she is sensitive to the inspiration and can see the ghost. Domingo is also like her. There is a scene where we can more or less sense that similarity. As you have seen, Domingo succumbs when his boss tells him to do so. He tears the photograph up. Because of such action he loses the rights to learn the truth. On the contrary, Maya doesn’t kill Domingo in her final trial, she doesn’t pull the trigger. That is why she receives the rights to know the truth and in the end she learns the truth.