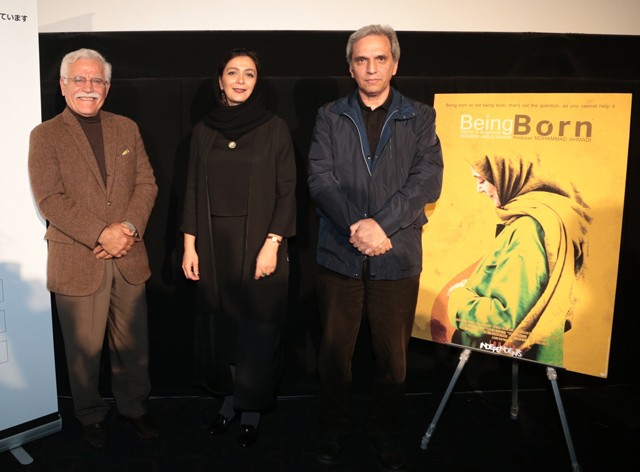 Being Born director Mohsen Abdolvahab came to Tokyo with his executive producer, Ali Asghar Yaghoubi, and lead actress, Elham Korda, to present the international premiere of his film, in the Competition section at this year’s TIFF.
Abdolvahab has had a long career as a documentary filmmaker, but in recent years has turned toward fiction films exploring important social theme. His newest follows the lives of Farhad (Hedayat Hashemi), a filmmaker, and his wife Pari (Elham Korda), a theater actress. Their middle-class world is rocked when an unplanned pregnancy introduces a big issue into their lives — whether to keep the child or have an abortion.
When asked why he chose this theme for his movie, Abdolvahab responded, “This issue of abortion has always existed in the past, right now and also in the future as well. But the changes in society and the view on abortion is changing, and I wondered how this is being considered in current Iran.
“Currently, Iranian society is going through a transformation,” he added. “And with that transformation there are families that are going through big changes. So as a director I focus on social issues. I wanted to make a film about these issues.”

Korda was asked why she accepted the role in the film. She posited that Being Born presented a complex viewpoint of the changing and challenging roles of women in Iran.

“When I read the screenplay, I was really attracted to the female character,” she explained. “The woman in the film has this life with her husband. She really values him. And also she has a child. But at the same time she has a profession outside of the home. But still she looks after her family very well and loves her husband. So, in that sense we can consider her to be a very traditional housewife, but also she has her own profession and she makes a very difficult decision. So she has that strength of being able to make that decision.”

Producer Yaghoubi mentioned that the film not only deals with Iranian problems, but that “the issue in this film is a global problem. You cannot ignore this problem if you have 7 billion people on Earth. Therefore, we, as a production team, we decided to go for it, because it is not only local, but it is a universal problem.”

When queried if the film has been shown in Iran, he replied, “No, we haven’t distributed it yet in Iran. We don’t know. But I don’t think that there should be any problem.”

Iran is officially known as the Islamic Republic of Iran – and religion plays a big role in Iranian life. Abdolvahab spoke of attitudes toward the issue of abortion.

“In Iran 98% of the people follow Islam,” said the director. “There is a discussion about abortion. According to the Quran, it is taking someone else’s life, so it’s a major sin. So from a religious point of view, if one considers having an abortion, they will go through many troubles. But with a changing society, there are some people who have no other choice but to have one. Because of that some people will have abortions secretly.”

Abdolvahab also talked about how the economic woes of Iran have impacted having children in Iran. He stated, “I think it’s becoming more difficult to raise more children, especially with the middle class.”

Korda brought in a more personal perspective, concurring, “Yes, I believe it’s very difficult to raise a child while having an occupation and I’ve given it a lot of thought. And that’s why I don’t have a child and why I think this way. And when you think of raising a child in a very good environment, you would need a lot of money and it would be an economic burden. So, if a woman has a profession and considers having a child they would probably have to compromise on either one.”

The husband in Being Born is a documentary maker, which has its own personal resonance for Abdolvahab.

“I am a director of documentaries,” he explained, “so maybe part of myself is in that role. But that’s not a major reason. In this film the couple discusses whether or not they should have a second child or not. And he’s not being cruel or taking this lightly. It’s because he has a profession that has social meaning and that’s why he thinks he can’t have an additional responsibility. When I thought of a profession that has a social meaning, I wondered what that could be. And in this film he’s a documentary maker, so he handles social issues, environmental issues. And he believes his occupation has a social significance”

Yaghoubi summed up his own feelings about the film. “Another issue, with Hilary Clinton and another guy I don’t want to name, is abortion. And I’m proud that we got the guts to make this film, because it is global, it is local; it applies to every one of us. And I’m proud of it,” he said with strident conviction.