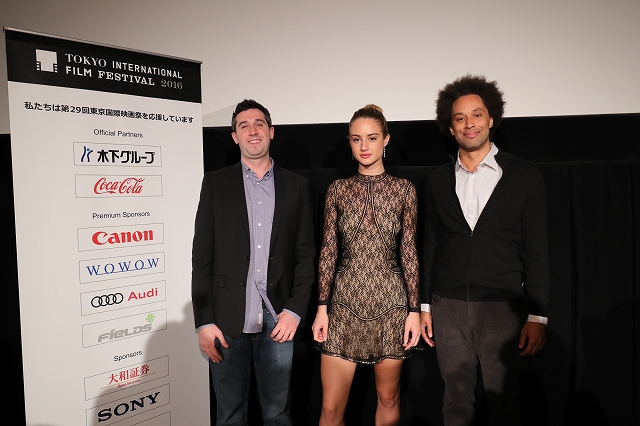 A mysterious briefcase, hard-boiled gangsters, a getaway driver – sounds like the recipe for a standard crime thriller. But Tramps, playing in TIFF’s Competition section, is anything but standard. The sophomore film from New York-based director Adam Leon, Tramps is part thriller, part boy-meets-girl rom-com, and part road movie, all wrapped up in a refreshingly original package.

It all starts when Danny, an aspiring cook and the son of Polish immigrants, is entrusted by his brother to swap a briefcase for a purse at a subway stop. Things don’t go as planned, and Danny and his getaway driver, a mysterious girl from Pittsburgh, embark on a mission through New York City to try to set things straight, slowly falling for each other in the process.

“The word ‘tramps’ has many meanings,” explained the director at the press conference for the film on October 30. “The one we embraced is ‘one who wanders without money.’” To me, it’s a movie about two people who are stuck in their lives and need to move, so they literally move all over.”

One factor that elevates Tramps beyond the level of a standard crime film – or a standard rom-com, for that matter – is how real, and utterly charming, the relationship between the film’s two tramps feels. According to Leon, that was thanks to a long rehearsal process.

“My favorite part is working with actors,” he said. “Hopefully, we give the actors a lot of freedom to find the characters. Through rehearsal, the characters and story can change, but the vision and heart stay the same.”

Grace Van Patten, who plays the film’s female lead, Ellie, agreed: “The long rehearsal definitely helps us find the moments before shooting, so that on the day we can play with it, but the basis is there,” adding that the friendship she formed with costar Callum Turner continues to this day.

“We wanted to capture a sense of old Hollywood romance,” said Leon, citing Chaplin’s Little Tramp as another influence on the film’s title, “but in a new way.”

But Tramps features a third character as important as Danny and Ellie: New York City. Leon’s Gotham is vibrant, diverse and on the move. Asked how he went about depicting the city, Leon responded, “I wanted to capture a sense of New York that isn’t seen that often. We just took to the streets with a small crew.”

He continued, “The city offers amazing production values when you just go there, don’t close off the streets, and just see the real life of the city.”

Van Patten added not all the shots in the film were entirely, strictly speaking, legal.

“The scene in Grand Central Station… am I allowed to say this?” Van Patten grinned at producer Jamund Washington before continuing, “We weren’t allowed to shoot there, so we were really sneaking around, trying to get the scene. Shooting was an adventure of its own.”

On the subject of a vibrant and diverse New York, Leon was asked why he decided to make his male lead a member of the Polish community.

“We made Danny Polish because in conceiving the story, the idea of a language some people could speak, and some couldn’t, was exciting,” explained Leon. But beyond the narrative element, “there’s a huge Polish population in New York, but they haven’t been on film that much. It felt right. We didn’t know that much about Polish immigrants, but we got to know them. That’s part of the fun of making a movie.”

Something else not often seen on film: a group of gangsters who, while not exactly good guys, act rationally even when things don’t go as planned.

“We wanted, overall, for the movie to take a realistic approach to an extraordinary story,” explained the director. In other films, “sometimes you see crazy, unhinged guys who break legs. But that would be stupid for them to do. They screw up, but have a more honest and mature way of handling the situation. It’s more real and more interesting.”

Leon, who made his directorial debut with 2012’s Gimme the Loot, was asked how, as a sophomore director, he was able to create such a unique work.

“The job for me is to identify a vision for the story and then find a group of people who share and can execute it,” said the director.

Producer Jamund Washington couldn’t agree more, stating that Leon has a “very specific vision, and wants to be sure that everyone understands that vision.”

Tramps has been acquired by Netflix, meaning movie fans all over the world will soon be able to enjoy Adam Leon’s unique vision of New York.