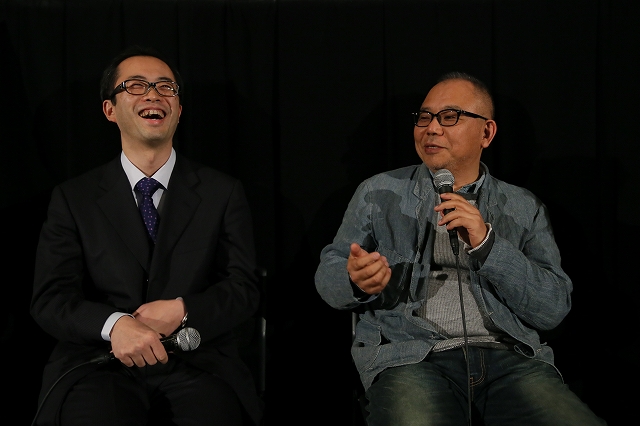 When anime and tokusatsu legends Hideaki Anno and Shinji Higuchi signed on to co-direct Shin Godzilla, the first Japanese contribution to the franchise in a dozen years, not even the most optimistic fans were prepared for its unprecedented success: nearly 80 million yen (over $75 million), by far the largest domestic take of any prior Godzilla film produced in Japan, surpassing even 2016 Disney/Pixar juggernauts Zootopia and Finding Dory, and exceeded only by the smash anime hit your name.. Released at the end of July, Shin Godzilla has now been in or close to the week’s top 10 grossing films for over three months.

Shin Godzilla’s executive producer, Akihiro Yamauchi, and filmmaker/critic Isshin Inudo — who has a cameo in the film — appeared after a sold-out screening in Japan Now on October 30 to discuss the film’s production and impact. Key to the film’s success, noted Yamauchi, has been terrific word of mouth and repeat viewings by rabid fans. “I recently spoke to one fellow who said he saw the film 50 times,” he said. “I’m very thankful for such a passionate response to the film.”

Shin Godzilla is a sort of reboot of the series, imagining what would happen if the rampaging reptile first appeared in Japan today. The film takes a markedly different approach than previous films, however, by largely eschewing the public reaction in favor of focusing most of its drama on parliamentary interiors and the panicked politicians who must find a way to deal with the monster. According to Inudo, who plays one such politician, this focus on bureaucrats is rare. “There aren’t many Japanese films where you can see so many middle-aged Japanese guys,” he laughed. “I guess I had the stereotypical look of this type of character.”

As Godzilla surfaces from Tokyo Bay, the monster is brilliantly reimagined as a modern-day natural disaster and a walking nuclear terrorist attack, evoking images of the 3/11 tsunami and the Fukushima nuclear crisis that followed in its wake. Yamauchi said this new approach, touching on social events, was important for a new generation of filmgoers. “Godzilla is such a signature franchise for Toho that we wanted to do it right,” he said. “Three years ago, we realized that we could make a new film for viewers who had never seen a Godzilla film before. We also felt it was necessary after 3/11 due to the climate of fear and anxiety.”

Charged boardroom meetings alternate with scenes of the creature’s destruction and precisely coordinated military maneuvers by the Self Defense Force, but the film’s dialogue-heavy script — written by Anno — appeared too long at first. “The script I received was so thick, with so many lines of dialogue, I thought it was for a two-part movie,” said Inudo. “When I was told it would be a single film, I thought it was crazy.”

Inudo asked Yamauchi if he was worried about the script’s length. “I was,” laughed Yamauchi. “We thought about making the script shorter and we had many discussions. At one point, we thought about eliminating the entire concluding Operation Yashiori sequence. Anno reassured us that the film wouldn’t run longer than two hours, but we’ve heard that before from so many directors.”

Toho subsequently arranged a radio drama read of the script with voice actors, who read the entire script in 97 minutes. “We were still skeptical,” said Yamauchi, “but once we started shooting, we saw Anno telling accomplished actors like Akira Emoto and Sei Hiraizumi that their parts would be cut if they didn’t read the lines quickly. At that point, we were confident that he would deliver.”

One of the most refreshing aspects of Shin Godzilla is the fact that an individual voice like Anno’s is so discernable in such a mainstream action film. Asked if he was worried about casting a known artist such as Anno as the director of Toho’s signature commercial franchise, Yamauchi replied, “So much time had passed between Godzilla films that we were really conscious of not doing the same thing.” Yamauchi said producers were inspired by the Alien series, which had a long and healthy cinematic life because it allowed different directors to helm each film with their own vision. “By having Anno bring his own unique interpretation to the franchise, we were hopeful that we could restart and continue the franchise with this new approach.”

Anno didn’t work alone, and his co-director, Higuchi, was a balancing presence, according to Inudo: “Anno and Higuchi work extremely well together. I’ve worked with Higuchi before and he knows when to push and when to let up on set,” he said. “But Anno is always pushing; he’s a demanding artist. Anno could probably only direct this film because Higuchi was there. And Yamauchi, too, for trusting these guys.” In reply, Yamauchi laughed, “More like, I was deceived.”

With such success, what comes next for the franchise? “Well, next year we will see the release of the next Hollywood Godzilla, as well as a Godzilla anime feature film,” said Yamauchi. “But we are actively taking ideas from fans for the next Godzilla film.”

Shin Godzilla is currently playing in theatres across Japan and select theatres — with copious English subtitles — around the world.

As for the big fella with scales, he is scheduled to receive a TIFF ARIGATŌ Award, for his contributions to the film industry, during TIFF’s closing ceremony on November 3.