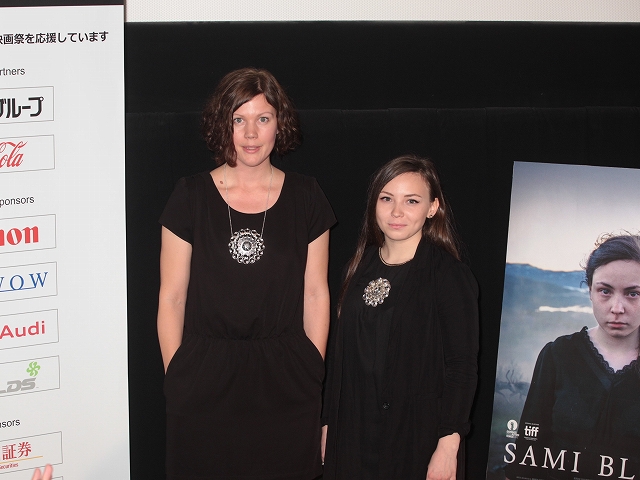 The Sami are an indigenous people who live in the northern portion of Scandinavia, incorporating parts of Norway, Sweden, Finland and even Russia. Their culture is built around reindeer herding and they speak their own language, which is closer to Finnish than it is to other Scandinavian tongues, which are all closely related.

Amanda Kernell’s debut feature, Sami Blood, a co-production of Norway, Sweden and Denmark, made its Asian premiere in TIFF’s Competition section on October 30, and the director appeared with her leading actress, Lene Cecilia Sparrok, at a press conference for the film.

“I’d been making shorts for ten years about other things, but always knew that one day I would want to do this story, which is inspired by my own family,” explained the Kernell. Her own mother is Swedish and her father Sami, and she admitted, “Some members of my family don’t like the Sami, even though they are Sami themselves. Sami was their first language. They herded reindeer and attended Sami boarding schools, so I grew up on both sides. I wondered if you could really become another person, and what does that do to you to cut all ties with your past and your family, your culture and your language.”

Kernell accomplishes this through the framing device of an elderly woman named Christina who reluctantly attends the funeral of her younger sister in a Sami community, where the story flashes back to Christina’s adolescence, when her name was Elle-Marja. At the age of 14 in the 1930s, she was forced to leave her community to attend Sami boarding school, where the Sami language was forbidden — speaking it resulted in corporal punishment — and yet children were made to feel inferior to Swedish society, which they were effectively prohibited from entering. In other words, their assimilation came without acceptance. The scenes at the school are filled with incidents of humiliation, from the cruel taunts of local villagers (another common word for Sami is “Lapp,” which here is used as a pejorative epithet) to physical examinations by government officials who make the children strip naked and then measure their anatomical features as if they were livestock.

Elle-Marja, a fiercely intelligent girl, wants to move out of her community and into Swedish society, and when her teacher tells her that’s impossible, she runs away to Uppsala, to the upper middle-class home of a young man she met at a dance near her school. Confronted with prejudice and condescension, she is still determined to be a Swede to the point where she cruelly rejects her family and her heritage.

The film explores the discrimination suffered by Sami in the past — although according to the filmmakers, they still suffer — due to a policy of treating indigenous people differently.

Actress Sparrok grew up in a Sami community, and still herds reindeer, a vocation that, unlike the character she portrays in the film, she is proud of. “It’s so much a part of my identity,” she told journalists. “I think my generation is the first that is proud of it. Previous generations were made to feel ashamed.” She added that while Sami are not forced to attend boarding schools any more, there is still widespread discrimination. “The people who live in smaller villages [near Sami communities] think the Sami have too many rights about land and resent them for it.”

Kernell also pointed out that some of the discriminatory dialogue used in the movie, though it takes place 80 years ago, was taken directly from an acting workshop she conducted with Sami children. “They were encouraged to assume the roles of their oppressors, and could scream out any of the curses they themselves had received from Swedish locals, the words that hurt the most. We used those lines in the movie.”

And while it was Sweden that wrote the UN Convention for Indigenous People’s Rights, the country itself has yet to sign it. One reporter asked Kernell to elaborate on a comment she made in the production notes about current refugee camps in Scandinavia. “One of the short films I made when I was going to film school in Denmark, was about a refugee camp,” said the director. “There, they also had a system of separation. The children went to school in the camps and never had any contact with Danes. Denmark is a very restricted country when it comes to immigration.”

The director stressed, however, that her movie isn’t political in nature. “It’s about shame,” she said, “but it’s also about how people see you and how you want to be seen. That affects you a lot when you’re young, and a lot of things can come out of that. We talk about assimilation today, but what does it mean? We ask other people to change their language, to change their way of being. And still we don’t let them into our society.”

One reporter commented that he really wanted to see what happened to Elle-Marja between the time she left her family and the time she became “Christina.”

“Yes, a big part of her life is missing in the movie,” agreed Kernell. “I worked on this film for years, and I had to focus on one part and do it thoroughly. I don’t know if you can put an entire life on film. But, anyway, it should be part of my next film.”