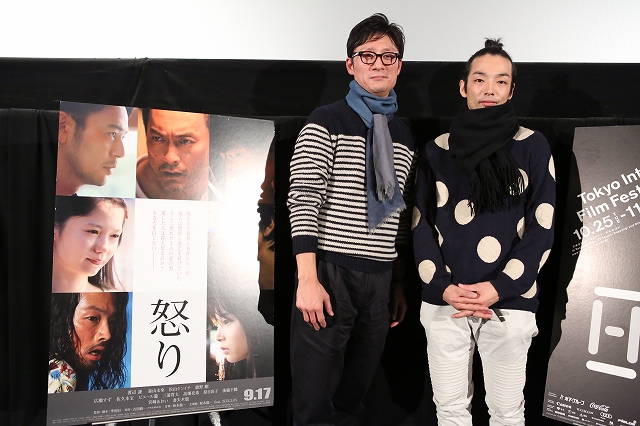 A husband and wife are murdered in their suburban home in Hachioji. On the wall is a single word in Japanese kanji, written in blood: “Rage/怒.” With few leads to go on, the police issue a warrant for a fellow named Yamagami, who has disappeared almost without a trace. A year later, three men with cloudy backgrounds surface in different areas of Japan, and each appears to match the description of the perp.

Naoto (Go Ayano), a rent boy in a Shinjuku bathhouse, is picked up one night by Yuma (Satoshi Tsumabuki), who surprisingly invites him to share his apartment. Quiet, brooding Tashiro (Kenichi Matsuyama) arrives in Chiba and finds work at Yohei’s (Ken Watanabe) construction company, then begins a relationship with his sad-sack boss’s daughter, the unstable Aiko (Aoi Miyazaki). Charismatic backpacker Tanaka (Mirai Moriyama) is living in a former military bunker on an uninhabited Okinawan island before he is befriended by two teens, one of whom, Izumi (Suzu Hirose), has just moved to the island with her mother. As the three drifters grow cozy with their friends and lovers, television news reports gradually reveal more details about the fugitive Yamagami that make us suspect each of the men to be the Hachioji murderer.

In a Q&A following the Japan Now screening of the film on October 30, writer-director Lee Sang-il and actor Mirai Moriyama discussed the ways it skillfully weaves these three stories and their many protagonists together, with particular attention paid to the pivotal character of Moriyama’s charismatic but erratic Tanaka.

Rage is an engrossing and ambitious movie experience. The rough cut of the film was originally over four hours long, according to Lee, because he “was thinking of three different movies while shooting.” One of the most remarkable aspects of the film is its use of stylistic devices like overlapping sounds and crosscutting to weave all three stories into one. “We put a lot of it together in editing,” said Lee, “but each story had its own emotional ride and dramatic structure.”

The original story, based on a novel by Shuichi Yoshida, begins as a police procedural but, like Lee’s 2010 murder mystery Villain, gives way to investigations of the psyches of lonely people when they begin to doubt their own feelings of affection for strangers. “Yoshida told me that he didn’t know who the killer would be even while he was in the middle of writing his novel,” said Lee. “This suggested to me that the killer – the mystery – was not at the center of this story.”

The murderer’s motivation is never depicted clearly, and it is up to the audience to fill in that void. “Specific locations like Okinawa have a lot of political meaning attached to them,” said Lee, “but when taken together with Chiba and Tokyo, I thought these characters living in these places represented everyone in Japan.”

Noting that the role of the backpacking Tanaka was written specifically for Moriyama, Lee said, “From the beginning, I believed Moriyama was the only one to play this role. I saw him in a performance in Israel called Dance and thought he would be perfect.”

Tanaka’s character is one of the most difficult to read in the film, alternating between bouts of extreme likability and sudden fury. “Maybe to some here he just appeared like a crazy man, but that wasn’t my intention,” said Moriyama. “But I’ve never killed anyone, so if anyone has that experience here, I’d be happy to listen.”

Tanaka’s arc is complex, as it is set amidst the political turmoil of protests to relocate American military bases and their accompanying GIs. “The director and I had many conversations about the character,” said Moriyama, “and we ended up concluding that Okinawa was a very logical place for him to go. It seems like a great hideout, but it’s actually impossible to hide, since it’s such a small island.”

A better hiding spot would be in the crowds of Naha, Okinawa’s largest city. “But that uninhabited island is what attracted him,” suggested Moriyama. “His mind would no longer allow that reality.” Moriyama said he even tried to find outdoor labor jobs in Okinawa to get deeper into the mind of Tanaka and his new reality, but was discouraged from it. “These jobs are often worked by drifting guys who really don’t have clear backgrounds, so I was told it could be quite dangerous.”

Much of Tanaka’s life takes place on the solitary island, where the beauty of its unspoiled beaches are contrasted with the dark dun of the former base in which he lives — a wet concrete bunker straight out of a torture-porn flick — which also serves as a constant reminder of Okinawa’s brutal war history.

The contrasting natural beauty and wartime relics of Okinawa serve as apt visual metaphors for Tanaka’s troubled mental state. “Tanaka is a person who has two people living inside him,” said Lee. “This is particularly true in his relationship to Izumi. He wants to save her, but he enjoys her pain as well. He is a contradictory character.”

Moriyama said what helped humanize Tanaka for him was that he was trying to escape his own demons. “I don’t think people can live in such a dark hole for very long,” he said. “He had already been on the run for a year and had to survive. So I asked myself, what was the salvation for this character so he could continue to live?”

Rage is currently playing in theatres across Japan.