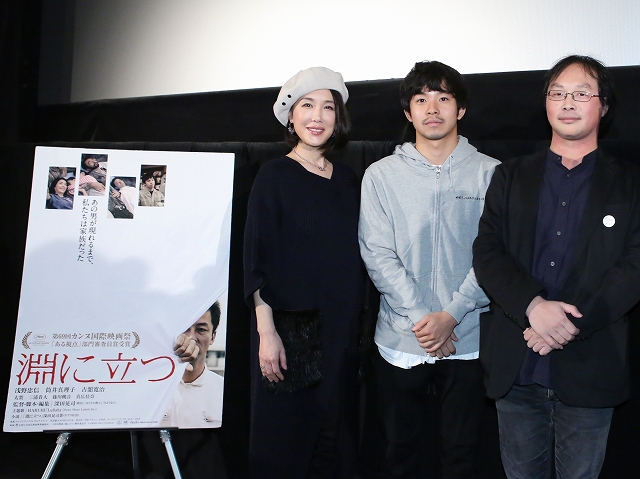 Toshio (the always excellent Kanji Furutachi) and Akie (Mariko Tsutsui) run a metalworking shop out of their home while silently passing time along with their preteen daughter, Hotaru. Their dull routine is interrupted by the arrival of Yasaka (Tadanobu Asano), an old friend of Toshio’s who has just finished a long stretch in prison. Toshio gives his friend a job and a room in his house, though its implied this is out of some obligation rather than the goodness of his heart.

Yasaka is friendly with Akie and Hotaru, even helping to teach the latter how to play the harmonium of the title, but his leering presence — frequently in clean white dress shirts or workers’ overalls — casts a dark shadow over the house. Yasaka and Akie also begin to develop an attraction for one another, though it’s not clear if their feelings stem from sexual frustration or from a mutual spite toward Toshio, but their foreplay culminates in a shocking tragedy. The story then jumps ahead eight years, where the family must deal with the aftermath, as well as their own unarticulated feelings of guilt, resentment and disappointment in one another.

Harmonium was deservedly awarded the Jury Prize in the Un Certain Regard section at the 2016 Cannes Film Festival. In a Q&A following its screening on October 30 in TIFF’s Japan Now section, writer-director Koji Fukada and lead actress Mariko Tsutsui answered questions about the film’s powerful drama.

The film was intended as a sort of continuation of the themes that began in Fukuda’s Hospitalité (09), winner of the Best Picture Award in TIFF’s precursor to Japanese Cinema Splash. It featured an intruder (played by Furutachi) who infiltrates and wreaks havoc on a suburban family. “The script for Harmonium was finished in 2006, but my career was just getting started,” recalled Fukada. “So I turned just the first half of that script into Hospitalité. The family in that film, which is infiltrated by foreigners, must be made aware of what is outside their family unit, but they become stronger as a result. In Harmonium, I wanted the family to confront their own loneliness, isolation and separation.”

The Japanese title of the film, “standing on the abyss” (fuchi ni tatsu), is meant to “suggest the darkness of the characters’ lives, and how they are staring down into it every day.”

The characters are forced to examine the darkness with the introduction of Yasaka, played with an ever-present intensity by Asano, who is a constant reminder that the sins of our past haunt us in the present. Fukuda paid particular attention to conveying Yasaka’s hidden evil through the art direction, punctuating specific scenes with bright red, such as a moment when Yasaka strips his work coveralls to reveal a red t-shirt, and another scene in which Yasaka and Akie observe blooming red flowers. “Actually, we painted those,” revealed Fukuda, who said he takes artistic inspiration from an unexpected source: “I love Hayao Miyazaki’s Nausicaa of the Valley of the Wind,” he said. “I learned a lot about color from that film and how, when circumstances change, the color palette subconsciously communicates that change in the narrative to the audience.”

Fukuda also revealed that Tsutsui gained 13 kilograms in just three weeks to portray, without the use of an intertitle, how her traumatized character had changed in the eight years since the events in the film’s first half. “I wasn’t sure I could do it because we had so little time,” she said. “But after talking it over with the director, I felt the best way to communicate her psychological change was through a physical transformation.”

While Asano’s performance haunts the film after he leaves, Tsutsui’s provides its expressive center, revealing layers of emotional depth over the course of the story. When an English-speaking audience member complimented Tsutsui on her moving performance, the actress remarked that time spent living in Montreal demonstrated to her how she needed to subsume herself in a role. “I realized that if my whole body isn’t into the words,” she said, “then my performance won’t be communicated to those who don’t speak the same language. It’s very gratifying to hear that you enjoyed it.”

Much of the film’s acclaim hinges on the performances of the excellent cast, and Tsutsui reserved praise for Asano, Furutachi and Taiga, a pivotal character in the second half of the film who entered the theatre midway through the Q&A. (The young actor had just finished a press conference for his other TIFF film, Japanese Girls Never Die, in Competition.) “They’re all such wonderful actors,” said Tsutsui. “When we were on set, it didn’t feel like they were acting. It’s more like they were the characters and I was spending time with them. They greatly helped me get into my own character.”

Tsutsui implored the audience to spread the word that such powerful independent Japanese films as Harmonium are being made today. Fukada agreed, arguing for a more diverse film market. “We need to be careful, because if we only get one kind of film, then our film industry just becomes a type of propaganda,” he said. “My goal is to get you talking after you’ve watched this film, even if that leads to arguments and disagreements. If a hundred people watch this film, I’d be very happy if they came away with a hundred different interpretations.”

Harmonium is currently playing in select theatres across Japan.